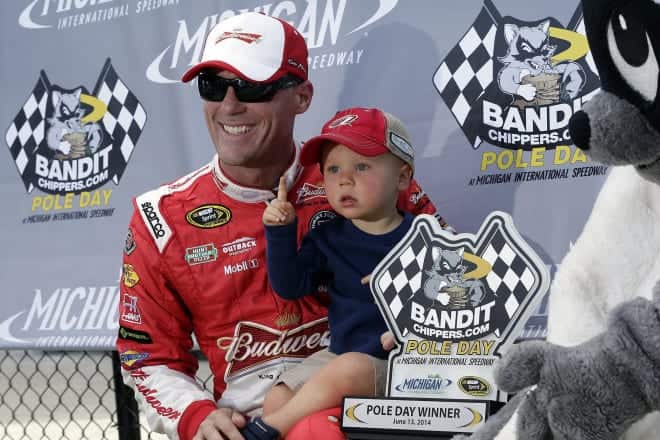 Just a mere five weeks ago, media and fans alike were asking whether Jimmie Johnson and his team were behind the eight ball as Johnson had not won a race yet in 2014.

Fast forward to today, and it seems like fans and foes alike are ready to engrave the NASCAR Sprint Cup Series trophy with Johnson’s name after Johnson reeled off three wins and a sixth-place finish in the last four races. And there is no doubt that the No. 48 team is hitting its stride as the season and the weather heat up.

But it’s far from a given that Johnson’s on the way to his seventh title this year; he has to go through Kevin Harvick to get there.

Kevin Harvick? The guy who’s ninth in driver points and has two DNFs and four finishes of 36th or worse in 15 races this year? The same one who was 26th in points a few weeks ago?

Yes, that Kevin Harvick. But he’s also the guy who has outraced Jimmie Johnson by an average of 2.5 positions over the last eight races despite Johnson’s three wins. The driver whose well-documented early mechanical and racing woes seem to be in the rear-view mirror. The one who laid down the fastest qualifying lap the sport has seen in nearly 30 years last Friday and walked away angry on Sunday because he finished second. The guy who’s probably had the fastest car in the field for most of the season.

It was easy to write Harvick off, or at least to more or less forget about him, over the past month as he stalked the lead but never had it when it counted. But that would be a mistake. If numbers don’t lie, then Harvick’s are telling a truth that necessitates attention. Those four races where he finished 36th or worse? He led three of them and ran as high as second in the fourth. He’s led 554 more laps than the point leader has this year. In the eight weeks since he finished 42nd in Texas after an engine failure, Harvick’s average finish is seventh.

In comparison, point leader Jeff Gordon‘s average finish in that same span is 10.6. With three wins in that eight-week time frame, Johnson’s average is 9.5. So is current points runner-up Dale Earnhardt, Jr.‘s. Matt Kenseth and Brad Keselowski, fourth and fifth in points, have averaged finishes of 12.6 and 11.1, respectively.

In short, in the last two months, no matter who has the most stickers on the car window, nobody has outraced Harvick.

Harvick got the nickname “The Closer” a few years back for his ability to be there at the end of races, sneaking to the front just when it counted, and he has backed that up in recent seasons. He’s driving the same equipment as the drivers who occupy the top three spots in points, and he’s consistently outrunning them in it. He’s also performing better than anyone else at Stewart-Haas Racing, including his boss, three-time champion Tony Stewart.

If Harvick has indeed put that agonizing five-week stretch from earlier this year, then he’s not only a title contender, but right now he also has to be the title favorite.

If the numbers aren’t enough to convince anyone of that, take a look at Harvick himself. A driver who has, through no fault of his own, spent most of his career in someone else’s shadow, he’s hungry to prove himself. As a rookie, Harvick was thrown into an impossible situation when he was brought to the Cup Series a year early to drive for Dale Earnhardt‘s Richard Childress Racing team after Earnhardt’s death. He got a lot of criticism in his early years for driving too aggressively and too far over his head — and sometimes he did. But in Harvick’s defense, he was racing like in his mind, at least, he had to live up to the ride, and there was a lot of outside pressure from fans and media for him to do that despite the fact that Harvick was still young and gaining experience. Perhaps he put more pressure on himself than he should have — perhaps others did that for him — but he made mistakes. And he learned from them.

Even as his tenure at Richard Childress Racing came to a bitter end, Harvick went down fighting for a title, finishing third in 2013. By many counts, RCR equipment was a step behind that of teams like Hendrick Motorsports and Joe Gibbs Racing for a good part of Harvick’s career, but he drove that equipment to six top-5 points finishes anyway.

In the last four seasons, Harvick has finished third in points three times. Not only does that leave him with a burning desire to get the title that’s been just outside his reach; it also gives him the experience to do that. This year’s revamped Chase could well play into Harvick’s hands. He’s been remarkably consistent, save those four races where things beyond his control forced his hand for the day. He’s leading laps, contending for wins. In all likelihood, had pit strategy not been a factor last weekend in Michigan, Harvick, not Johnson, would be the first three-time winner of 2014. He certainly had the car to beat, and he’s had cars that good every single week.

And that’s another thing. Some have wondered whether Stewart-Haas and other teams running Hendrick equipment are getting equipment equal to what the Hendrick teams are getting. Harvick’s performance this year should lay to rest any doubt that they’re getting what they pay for. His team is using Hendrick equipment to outrun Hendrick drivers on a consistent basis. The No. 4 has been the best car on track at some point nearly every weekend. The driver is making the most of that.

It’s a long time until the checkered flag at Homestead-Miami Speedway in November, but so far this season, Kevin Harvick’s performance has been impressive. The cars are fast, the driver is hungry — perhaps hungrier than anyone else on the race track — and the numbers are as good as anyone’s outside a few hiccups. It’s too early to worry about the name plate on the big trophy, but the engraver might want to practice his Ks and Hs. The hype right now might be on Johnson, but that’s only because Harvick is doing his usual thing — biding his time, waiting to make his move.

And when he does, he’ll make a race of it.

Yes, but will average finish matter with the new crapshoot chase format?
If my choice is between the 48 or the 4, I’d go with the 4 even though I can’t stand Harvick (he’s a punk). However at this point, I’d just like to see someone different holding the trophy above their head.

Jimmy Johnson will have a lot more to worry about during the chase than just Kevin Harvick!

Every year, people pick someone to point at and say, “nuh uh! He might beat the 48!” And except for Kurt Busch in 2004 and Keselowski’s lucky break in 2012, no one but Tony Stewart has been able to really beat them. And I say them, because I simply refuse to believe he is a superior driver to so many. The only duels he engages in are getting off pit road. This must be Harvick’s year to be the Kenseth of 2013, the Hamlin of 2010, and on down the line.

“Just a mere five weeks ago media and fans alike were asking if Jimmy Johnson and his team were behind the eight ball as Johnson had yet to win a race in 2014”. NO, a mere five weeks ago the lazy, lockstep, lapdog NASCAR press were suggesting that Jimmy Johnson was in trouble. The fans never believed it. What this fan is asking is why is there rarely disagreement among the NASCAR press? Are you working off of NASCAR provided PR points?

Hey Amy, I’m sure you’ve heard the expression ” statistics are for losers”. Doesn’t matter what Harvick’s misfortunes have been my money’s on the 48 for number seven this year. Harvick and the 4 team will fold under pressure just like Kenseth and the 20 team did. And I give the majority, if not all ,of the credit for the 48 team’s success to Chad Knaus by the way he molded that crew and driver. I think there is more than one driver out there that would be doing just as well driving for that team if given the opportunity.

Good publish. I simply stumbled upon your site in addition to tried to point out that We have definitely adored looking a person’s web site posts. Of course We will be opting-in to your feast and i also i do hope you compose once again immediately!

i love your blog and i think its going to my favorite!!i love viagra and cialis too! ckadceaeedkebafg