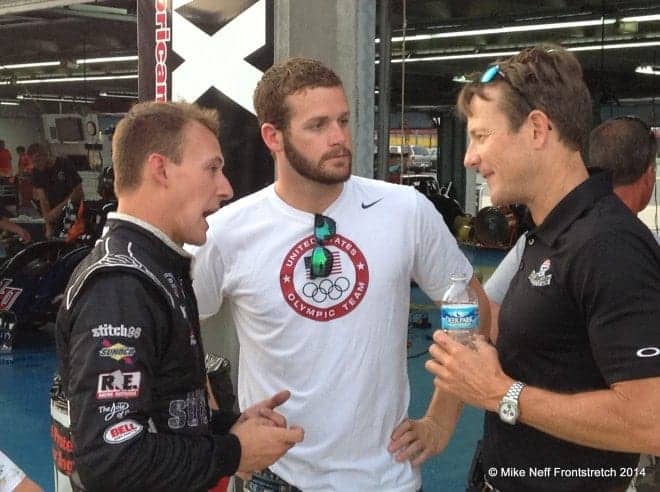 Daniel Hemric had a great week after leaving Charlotte last Tuesday. The second round of the Summer Shootout was cut short by rain which meant the Pro division did not run. Hemric packed up and headed to Anderson Speedway in Indiana to run the Redbud 300. Several members of his team are from that part of Indiana so it was an exceptionally big race for them. Hemric did not disappoint his guys, taking the lead on a late race restart and hanging on for his first major win in a Super Late Model.

Hemric is the defending Southern Super Series champion, but he had never taken the checkered flag first in one of the major Super Late Model races. He is hoping that finally breaking through and grabbing that first major win is going to lead to some momentum for the rest of the year as his team is going to run all of the big races.

On this night at Charlotte, Hemric was poised to continue his dominance in the Pro division. He was leading the makeup feature when there was a restart on lap 19 of the 25 lap feature. As the field headed into turn one after the green flag flew, a car behind him was punted into him which then turned Hemric around. He decided to park the car and wait for the second feature of the night. When the regularly scheduled feature rolled around, Hemric was first in qualifying but had to start fifth due to the invert number drawn for his division. Hemric carved through the cars in front of him, took the lead near the halfway point and drove off to his second win in three races this season.

He sat down during a break to do this week’s driver diary.

Daniel Hemric: It isn’t frustrating, you are just antsy, you are ready to go. To be able to get the qualifying in and all of that good stuff and have everybody ready to go, it really makes it a bummer to then have to go home. It makes it really hard to sleep that night because you are so amped up and ready to race. We came back today and felt like we were as strong as ever, if not better than last week. We had some bad luck in the first race and sat on the pole for the second one so we’ll see how it goes.

Neff: This past week you took some time away from the Legends gig and went up to Anderson, Indiana and won the Redbud 300. How cool is it to win one of the signature Super Late Model races in the country?

Hemric: It is really prestigious to me. A lot of people on my crew, and most people don’t know this, are from that area. Some of those guys are from within two miles of Anderson. It is a track they have been going to since they were four years old. They’ve been going there for 30 years. To get them a win was really cooler than anything. To see the emotion in those guys and for them to say they are Redbud 300 champions was really cool. For myself, I’ve been fortunate to win some 150 lap races and some pretty decent size shows but not in a premier event. It was definitely cool to etch my name in the record books in one of those. Hopefully that’s not the last one.

Neff: That is the next question. You have a few more of them coming up this year between Winchester, the World Crown, the Oxford 250, the All-American and of course the Snowball Derby. Are you planning on running all of the signature events?

Hemric: Absolutely, that is one of the things that Jake and Deanna (Owners of Carswell Motorsports) are really pumped up about. Our schedule this year is really stacked with the biggest events, with the best drivers we can race against throughout the country. If you name a big race we are running it. We are excited to be a part of it. When you go to one of those shows it is an honor to be a part of it, to be able to win one is amazing. We’re moving forward with the program and hope to be able to win more in the future.

Neff: It is about 95 degrees out here in the heat of the day, the hottest day so far for the Summer Shootout. How does heat like that come into play with how these cars react on the race track?

Hemric: Really, in my opinion, it equals the field out. Some guys have been able to find out a little more grip or find a little more turnability. All of that goes out the window when the track is hot and greasy. In my opinion the hotter the better. I wish it was 110 and we were out here racing. It is always fun and I’m just happy to be here.

Hemric is still in contention for the Summer Shootout title even though he lost the point lead to William Bryon due to his misfortune on the restart in race one. Byron chased him to the line in the feature so the points are still in Byron’s favor for now. Hemric will certainly be trying to control the rest of the season to secure another Summer Shootout title.