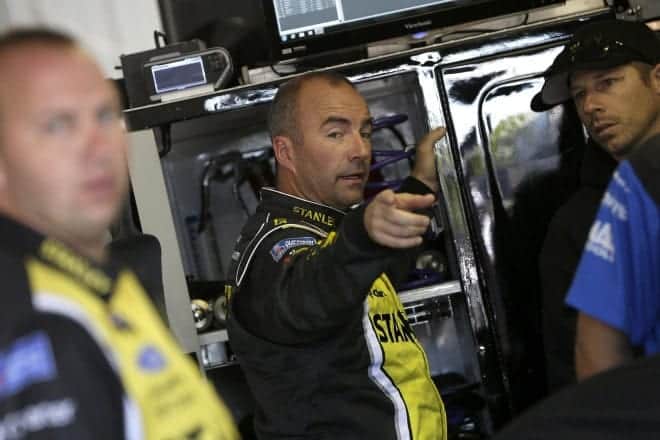 Amrbose out of contention? Only need only to point to Martinsville and Bristol where a win could happen - or at the very least, net enough points to squeak into the Top 16.

“Wild card.” Fans heard that term, leading up to Sonoma, more than “wine country,” “road course,” or “Boris Said.” It’s a modern reality of the Chase format, designed to give “underdogs their day” at the select few races left where they can actually go out and compete for the win. No longer will a David Ragan victory at Talladega go unrecognized, says NASCAR! He’ll now get a spot in the postseason field, three weeks of sponsor recognition and then graciously bow out like any March Madness Cinderella team should: after the Sweet 16.

In all seriousness, though there was a reason people pointed to Sonoma as something special. The road courses equalize Cup teams these days, in an era where aero push automatically pushes the rich two to three laps above the poor, just for kicks. Suddenly, names like Marcos Ambrose, AJ Allmendinger, even Michael McDowell come back into play, in position to have their One Shining Moment and pull off a minor miracle. Today, Sonoma offered them the keys to the castle, in the midst of big names suffering major problems to take them out of contention (see: Kevin Harvick, Matt Kenseth, Tony Stewart). Jamie McMurray, not often known as a road course racer won the pole for a second straight year. Allmendinger started alongside, with Ambrose lurking midpack and even longshot Casey Mears starting 12th, climbing to seventh early and fighting hard to grab a piece of the action.

Each one climbed up to take their shot; one by one, they tried to scale the mountain. McMurray had perhaps the most luck, leading nine laps and remaining top 3 for much of the afternoon before fading on old tires late. At one point, the No. 1 car seemed in position for its first road course victory, running for Chip Ganassi, but some ill-fated contact with the flat tire of Clint Bowyer cost just enough momentum to make a difference. Never able to reach the top spot, during the race’s second half, May’s All-Star winner would have to settle for fourth.

“I thought I had a chance to win but when the last caution came out, I was working [winner] Carl (Edwards) there a little bit, and I was just waiting on him to make a mistake,” he said. “I felt like I was better than he was. And when we went back green, after the caution, I just used up too much car in (Turns) 1 and 2, spun the tires really bad and paid the penalty for that the remainder of the run.”

Allmendinger, meanwhile might have had the best car of all the Davids looking to trump Goliath. Leading 35 laps, his No. 47 Toyota got shuffled back through a carnival of cautions but had the handling to work through the pack with ease. It was running inside the top 10, making a charge with less than 25 laps to go when all of a sudden, the ‘Dinger found himself dinged by perhaps the most celebrated road course racer of the day: NASCAR’s Most Popular Driver, Dale Earnhardt, Jr. Critics lauded the No. 88 for finishing third, a momentous run at one of the driver’s roughest tracks, but his pumped-up performance came at a cost to a team that felt they had one in the bag.

“I thought I gave him enough room on the outside,” said Earnhardt of a wreck that left Allmendinger limping, two laps off the pace at the finish. “He had a lot of wheel, we’re coming out of that corner and his right front poking out like that jumped the left rear of my car, and I felt it yank on the car real hard and looked in the mirror, and I thought he and about 10 other cars were wrecking, and I thought the caution was coming out.  I don’t know how bad it was for him, but I had just got around him and we got down into that corner and I ran low protecting my line, he shot to the outside and that’s his prerogative.  But I thought I gave him enough room.  I didn’t think I ran him in the fence.”

The blame game doesn’t matter now, because the end result still can’t be changed. It’s one of those racing deals, a fight where Goliath survived, scoring a meaningful third while a meaningless 37th shatters the hearts of a JTG-Daugherty team that has been having a “career year” in all aspects. With the native Californian falling short, at the equivalent of his home track you have to wonder if that’s the third and final strike for a Chase bid dependent on cashing in whenever these longshot opportunities come up. Considering Paul Menard is the only top-5 car, in Richard Childress Racing equipment you’ve got to wonder if an intermediate victory is indeed possible.

That left Ambrose, then, in charge of a Cinderella bid, especially with Mears running around with half a hood (the rear bumper of Kasey Kahne took care of it, leaving the No. 13 to falter to 13th). For a time, it looked like the No. 9 car snookered them all, using tire strategy to take the lead and hold it after a final round of fuel stops. But a shaky restart, one in which second-place Carl Edwards clearly appeared to beat the leader to the line, left Ambrose sitting there wondering what might have been.

“We’re gonna keep working at this place to try and make ourselves better, but congratulations to Carl,” he said, quickly backing off in-race comments in which he strongly felt Edwards jumped the restart, a charge NASCAR denied under the 2013 rule change where the leader calls the shots – in this case, it was decided Ambrose just had a really bad “fire.” “It was a handful [running the No. 9].  We came here with a strategy because we had the fastest car for a couple of laps, but it would fade away really bad.  We came with a really soft package and I was hanging onto it all day, too.”

In the end, Ambrose finished up eighth but it might as well have been 80th considering the pressure-packed weekend he just went through. Rumors swirl about a return to Australia, all the time, and that Chase make-or-break bid won’t be served on a silver platter anywhere else except, maybe, Watkins Glen.

I guess that’s the silver lining for all these underdogs, that they’ll have one more opportunity to take a right turn at the right time come August. In the end, Carl Edwards deserved this win, a separate story of mental focus in the midst of Silly Season crises and the supposed downfall of Roush Fenway Racing. The right strategy was played, Edwards snuck out front despite old left-side tires and then held off the winningest Sonoma driver of all, Jeff Gordon.

But those drivers could be winning at Kentucky next week, or at Loudon a few weeks after that. The ones mentioned here should have their chances come few and far between going forward, which is why the plane rides home, Sunday night, were filled with plenty of buried heads, deep in thought.

Sunday was a door, opened wide for the underdogs and the cards didn’t quite fall their way. Opportunity lost.

You know Dale Jr is neither a liar nor a wrecker. What he said is true, and what you said is from a bias you’ve held for years. You are digging a hole in quicksand.

Pepper, I think you are being a bit overly sensitive.
He didn’t even say anything about Jr taking out Kenseth.
I have seen Jr get the short end of that deal many times on the road courses. “Stuff” happens at road courses. Contact is made. Sometimes it’s nobody’s fault, just close racing. Still, it doesn’t change the fact that if driver A wouldn’t have been as aggressive, driver B wouldn’t have gotten spun around.
Maybe I missed the offending remark.