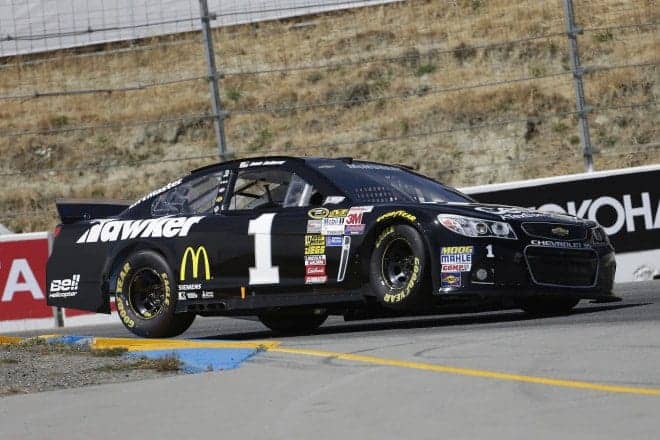 Did you miss an event during this busy week in racing? How about a late-night press release, an important sponsorship rumor, or a juicy piece of news? If you did, you’ve come to the right place! Each Monday, The Frontstretch will break down the racing, series by series, to bring you the biggest stories that you need to watch going forward for the week ahead. Let our experts help you get up to speed, no matter what series you might have missed, all in this edition of Pace Laps!

Cup Series: Mixed-Bag Results for “Opportunity”
Things looked promising for Jamie McMurray, AJ Allmendinger, and Marcos Ambrose.  For a track that is supposed to provide an opportunity for these “lesser” names to enjoy the concept of parity and possibly score a win, they all had a chance to capitalize.  Until they didn’t.

Due to different pit strategies and, well, better teams, these other drivers were unable to cross the finish line first.  In a sport that seems to be looking for a underdog story to counter the monoliths that is basically Hendrick Motorsports and its subsidiaries, the race didn’t conform to that ideal – sort of.

After Roush-Fenway Racing’s lackluster showing at Michigan last weekend, their results of having two cars in the top ten, with Carl Edwards taking the win, has to be considered significant.  Having Ambrose or Allmendinger win would have been a great storyline, but having RFR show up as being able to battle the top dogs is equally important.  Whether Sonoma is a one-race aberration or a sign of change, it doesn’t matter, a little bit of a shake-u was needed.  Huston Ladner

Nationwide Series: Brendan Gaughan’s Feel-Good Win – There’s nothing the NASCAR world loves more than a first time winner. And when that first time winner is a driver who has been around a while and is one of the most loved in the garage, it makes it all the better.

Brendan Gaughan’s victory on Saturday at Road America was one of the most well received by all in the NASCAR garage as congratulations and praise quickly rolled in after the checkered flag flew. A driver who, in 97 previous starts, had experienced a little bit of everything, finally got the chance to celebrate when he came from behind to take the lead for the final time with two laps to go. The Nationwide regular held off the charging road course ace Alex Tagliani.

It was emotional for Gaughan and exciting for the fans. Road racing always brings out the best – and even worst – in drivers, but Saturday was a display of racing perfection. There was excitement with drivers slipping, sliding and passing all over the place. There was the strategy for fuel mileage and rain or dry tires.

Simply put, it was a day that everyone walked away happy, though none more so than the Las Vegas native, Gaughan, as his career rebirth with Richard Childress Racing has now been topped off. And yet, he’s not done. As the season goes on and with Gaughan now a winner, he’s got all the momentum to become a legitimate title contender.

And no one would have a problem with if he were. Kelly Crandall

NHRA: A Husband and Wife Face Off – Pro Stock Motorcycle stole the show this week at the Auto Plus NHRA New England Nationals at New England Dragway in Epping, NH. For the first time ever in the NHRA Mello Yello Series, a husband and wife faced off in the finals as Matt Smith lined up to race his wife, Angie Smith in what was also her first appearance in a final round. To make it even more interesting, Matt is the tuner for both of their bikes.

“In this sport, I’ll take it any way I can get it,” said Smith. “It’s my first one, I’m proud to be here. I’m really tired of dusting all of [Matt’s] Wallys. I at least want to dust one of mine at the house. Now I have one, and I’m good with that.”

Angie Smith also raced her way past Jim Underdahl, Eddie Krawiec, and Andrew Hines on her way to the finals.

Ron Capps scored his first win of the season in Funny Car, beating Alexis DeJoria, who was trying for her third, with a run of 4.095 seconds, 315.19 mph to DeJoria’s 4.121, 309.98 mph. The win also gets Capps the final spot in the Traxxas Nitro Shootout (think All-Star race) which will be run during the Chevrolet Performance U.S. Nationals at Indianapolis on Labor Day weekend.

Rookie Johnathan Gray made it to the finals for the second consecutive event where he would take on teammate Dave Connolly in all Gray Motorsports final round. Connolly, who was out of the driver’s seat in 2013 serving as crew chief for Erica Enders-Stevens, took the win with a 6.536 at 213.23 mph to Gray’s 6.577, 213.16 mph. Toni Montgomery

Formula One: Old Track Revisited, Same Story for the Season

For the first time in ten years, Formula One visited Austria, racing at the Red Bull Ring, which was formerly known as the A-1 ring in Spielberg.  Williams-Mercedes driver, Felipe Massa, earned a surprising pole position for the race, with his teammate Valterri Bottas alongside.  Lurking just behind, however, was current points leader Nico Rosberg.

Though the Williams-Mercedes duo got off to a fantastic start, the team’s strategy of holding them out a few laps too long undid them.  Mercedes called their drivers in early which allowed Rosberg and Lewis Hamilton to ascend to the leading positions.  They held them to the conclusion, with Rosberg earning his third win of the season.

The last race, the Canadian Grand Prix, was apparently just a hiccup for Mercedes and their dominance and they are now clear and ahead racing with themselves for the championship.  Ferrari driver Fernando Alonso said just as much by stating that it is “impossible” to beat Mercedes this year.  Sure, there are eleven races still to go, but with the enginge-freeze regulations in place, the necessary tinkering to compete is not an option.

In another story.  At the “home track,” as Red Bull owns the Austrian circuit, Sebastian Vettel endured another terrible race.  The electronics of his car gave out early but were able to restart, though he went down a lap in the process.  Just prior to the midpoint of the race, the 4-time champ rear-ended another driver causing damage to his front wing.  Shortly thereafter the team called him in to retire his car.  Vettel now has as many retirements this year, three, as he had the previous three years combined.  It looks like his amazing four-year run is being undone by a terrible season in which he has finished on the podium only twice.  Oh how the mighty have fallen.  Huston Ladner

Short Tracks: Ace Speedway to Finish Franklin County Speedway Schedule – A couple of weeks ago, we shared the sad tale of the demise of Franklin County Speedway. After a year and a half of blood, sweat and tears from the people of Moonshine Capital Productions, the owner of FCS undermined their efforts and basically killed the entire project. The people who had returned to FCS were outraged at the development and many of them vowed to not return unless the Moonshine group returned. After some quick negotiations, an alternative was developed so that the teams who ran the beginning of the season would still be able to chase a season long championship.

Brad Allen is a longtime friend of Langley Austin, who was promoting FCS through his Moonshine Capital group. Allen is also the promoter of Ace Speedway in Altamahaw, NC. The track runs a normal weekly show on Friday nights and has been a very successful enterprise since Allen switched over from being a driver to a promoter. With Saturday nights open and FCS competitors looking for another place to chase their passion, it was a natural fit. The remainder of the FCS schedule will be competed at Ace.

The travel to Ace is most likely a little longer than the teams were trailering to Franklin County but it is a track that is welcoming them and will continue to run a fair and competitive event. While it is a roughly 90 mile trip from FCS to Ace, the fact that the competitors will be welcomed with open arms and the opportunity will also exist for teams to run back-to-back nights if they feel so inclined, it is a win-win for everyone involved.

While the ultimate outcome would be a situation where Moonshine heads back to FCS to continue the great work they’d done, this temporary solution is a great alternative. In a time when promoters very rarely can work together scheduling races around each other or trying to provide similar rule books between venues, it is a very refreshing development to see people working together to try and do what is best for racers. Mike Neff

ARCA: Enfinger Back to Victory Lane – Grant Enfinger started the season off like he was not going to lose a race. However, after winning the first three races, Enfinger went five straight without making it to Victory Lane and lost the point lead to Mason Mitchell. This weekend he went back to a short track, which is where he has made most of his hay this year, and laid a smack down on the entire field.

When the checkered flag flew on the Akona 250 presented by Federated Auto Care, Enfinger was one of four cars on the lead lap. Enfinger had lapped the other 19 contenders, including point leader Mitchell and Frank Kimmel, who came into the race in third place in points. While Enfinger notched his fourth win of the season and eighth Top 10 in nine races, Mitchell came home in 10th and Kimmel rolled across the line in 11th.

The schedule for the ARCA season is nearly halfway done. The total schedule is 20 races long and there are nine races in the books. The remaining 11 races are split between five short track races, two dirt tracks and four superspeedways. As Enfinger has displayed, his forte is short tracks and the heavy emphasis on short tracks could very well play directly into his hands. If the team BCR group continues to bring super fast cars to the track like they did this past weekend, the rest of the ARCA field had better start aiming for second place. Mike Neff