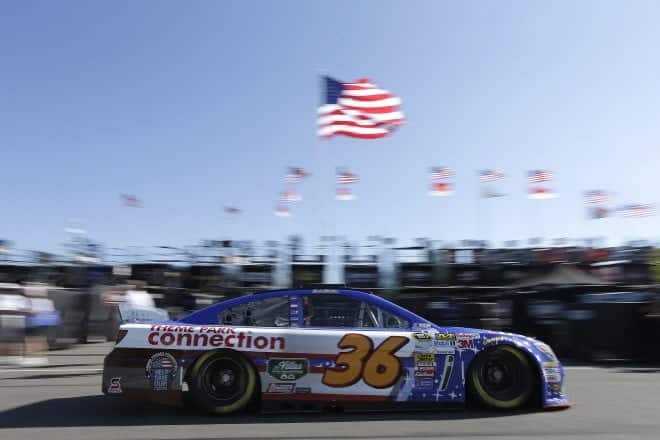 In January 2014, a management restructure at the Pocono Raceway resulted in Ben May ascending to Chief Marketing Officer. While the position is new for May, he certainly is no stranger to the Tricky Triangle, having worked with the Mattioli family since 2001.

May sat down with our own Tony Lumbis during the Pocono 400 weekend earlier this month. The two discussed a variety of topics, including Pocono’s social media presence, track attendance, half-time parties, an upcoming GoBowling.com promotion with a fantastic grand prize and above all else, keeping Doc Mattioli’s legacy alive.

You’ve worked your way up through several positions with Pocono Raceway. Can you provide a little background on your rise to the CMO at the track?

I’m a 1999 graduate of  Elon University in North Carolina with a degree in business management. I started working at Pocono for the Mattioli family in 2001.  I’ve worked with our concessions team as well as corporate display, fan fair, trackside sales and just kept adding from there. We had a corporate restructuring this past January when I was named chief marketing officer. My office handles Marketing, PR, ticketing and the fan experience. I’ve been with the Mattioli family for 13 years and I’m very appreciative of everything they have done for me. They are a great family. We’re all here to keep up Doc’s legacy.

Those of us who have been going to this racetrack for a long time have definitely noticed additional focus on marketing, PR and fan interaction. Is there any particular reason for the timing of this change?

We’ve done a good job of becoming agile with the ability to move quickly. We don’t have 20-some vice presidents or a large group of lawyers so we can accomplish a lot in a little period of time. We’ve hired Kevin Heaney, who started out as our social media representative and is now director of media relations. I give Kevin a lot of credit for growing our social media presence to where it needs to be. He is a former RCR PR guy, so he made the transition from team to track and really embraced it.

A lot of what you see on our website is Kevin’s influence.  Our entire website is based on the fans and what their needs are. We’ve made sure that it explains how tickets are bought, provides guidance on planning the trip to our facility and highlights activities for the kids.

Ricky Durst is our senior director of ticketing and marketing who we hired a few years ago, and he has certainly been a major asset. He came from the non-profit world and also worked for a water park so he’s been great with guest relations and enhancing the fan experience.  A really creative guy.

Brandon (Igdalsky) and his brother Nick have done a great job building a great team around them. We’re all a bunch of young guys trying to make a difference and give people the experience they deserve

Track attendance has been a hot topic for the last couple of years for all the wrong reasons. Depending on who you talk to, people provide different reasons for the decline including the economy and the fact that much of the younger generation would rather be on their electronic devices. What would you attribute the attendance woes to and what has Pocono done to try to bring fans back to their facility?

First, I think TV does a great job. So it’s always going to be more convenient to sit on your couch and watch the broadcast on your big screen TV. Don’t get me wrong, the tracks are grateful for that. What we’ve tried to do is enhance the fan experience. The in-person experience is the best; just ask anyone that attends a race for the first time.  We’ve increased the display area, added a kid’s zone, built Tricky’s Kit Kamp for the younger generation of fans, as well as a zip line and go-kart track. We want to create a local fair atmosphere in a big event world where families want to spend the day with us.

We just held our seventh annual Kid’s Day, where we we’ve given probably over $350,000 worth of tickets to local and regional 501(c)(3) organizations which gives us the opportunity to introduce the kids to racing. Our Saturday ARCA race is a great way to introduce the kids to the sport where they can get a taste of NASCAR racing without being overwhelmed by huge crowds.

At one time, NASCAR used to be a destination event, but today, that might not necessarily  always be the case. While we still have a ton of RVs in our lots, I think to a lot of the 20-somethings, the race is like a football or baseball game where they get their tickets on a Thursday and then head up for the day on Sunday. I believe StubHub recently reported that 70 percent of their sales have been within a few days of game day.

What is the recent trend at Pocono specifically, are you starting to see fans come back to the track?

Yes, we’re doing well. We have a third of the U.S. population within 300 miles if you look at the major metropolitan areas between Washington, D.C. and Boston, including NYC and Philly. We’re in a prime market, but within that geographical market, we have hundreds of sub-markets so we’re always working on different ways to reach out to each one.

There has been a lot of talk recently about significant changes to the Sprint Cup schedule coming in the near future. If you had your choice, what would be the ideal location on the schedule for your two NASCAR events?

I’m actually very pleased where our dates are right now. We have a saying that summer starts and ends at Pocono. We’re happy with our first week in June and in August along with our INDYCAR race right in the middle on July 4 weekend. I can tell you that we certainly don’t want to go too much earlier in the season as it takes a few months to get our facility back in shape after the winters around here.

How do you deliver value to the sponsors when you only have three marquee events throughout the year to sell?

We have to sell it in a tight package. I think we’ll always be at a little disadvantage, not having a major corporate umbrella. For example, a salesperson at Daytona can package Daytona, Talladega, Chicagoland and California if they wanted. That is a big selling point to a major retailer.

So what we sell is value, location and experience. We have our product priced well, our location, 90 miles from New York City and Philly is an advantage, and we’re agile. When an idea comes our way, we can go to Brandon and Nick and ask if we’re doing it or not doing it. We don’t have to wait for a pitch to go through layers of approvals and opinions

For example, this year we’re having NASCAR’s first half-time party. From lap 60 through 120, we’re having a party behind the grandstands with seven big-screen TVs, beer, food and games. We don’t want to take people away from the stands but our research has shown that in the 18-34 market, they say they like coming here but they can get bored. We have the most respect for NASCAR and the race, so our proposal is to just take a half hour or hour to step away and have a few drinks and some food while still watching the race on TV. That is one example of how we differentiate ourselves from others and Bud Light was on board to sponsor that event as a result.

I had the privilege of interviewing Doc a few years ago and he explained that Pocono is in the enviable position of not depending on an event sponsor for financial assistance, allowing you to work with one only if the fit is right. GoBowling.com worked so well last year that they are back on again as the title sponsor for the August race. What is it about that organization that makes it an ideal candidate to work with Pocono?

The demographics for bowling and NASCAR are pretty much the same. Seventy-three million people will bowl this year, which is an attractive number to a raceway. We are giving them access to a major league sport while we get access to millions of bowlers. They are good guys to work with and we want to help them out. Their goal is to get bowling back in the front of people’s minds. Getting that sport in front of the NASCAR audience is a big deal.

They’ve been really good at engaging their consumers. This year, we have a new promotion coming out that involves their partnership with Richard Petty Motorsports’ No 43 car so be on the lookout for something really cool leading into the August race where someone will have the chance to win some cash. Also, at any of their bowling centers they have a new contest called “Stop your Thirst, Start the Race.” Anyone who buys a 44-oz. Pepsi at one of their participating centers will be automatically entered for a chance to wave the green flag at the GoBowling.com 400 on Aug. 3.

What is the five- to 10-year plan for the track going forward?

Our goal is to turn ourselves into an entertainment facility. Our marquee events will always be our motorsports events. We have over 180 “track days” where some activity is going on out on the track. But we’d like to have things like a country music festival or a rock festival. We have 2000 acres here and we need to use it.

You’ve brought the IndyCar Series back and brought in the Truck Series a few years before that. Do you see any other racing series coming to Pocono?

We’re always open to the possibility. We’ll always have ARCA. Doc and Rose were always loyal to the Marcum/Drager family [referring to ARCA president Ron Drager] and we always will be. If there are other racing series that are interested in us, then we are open to having a conversation. In my office, we never discount anyone. If someone has an idea and it makes sense for all parties involved, then we’ll move forward.