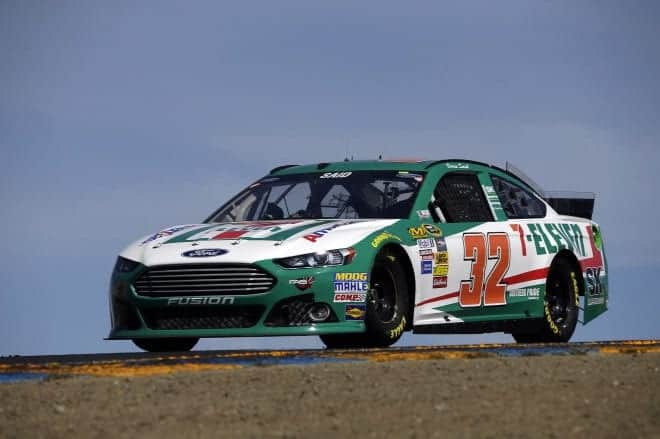 I say we cage Boris Said up, put him in a safe environment with plenty of hair care products and don’t let him out until Watkins Glen rolls around.

You see, Said is an endangered animal, much like the black rhino and Hawksbill turtle, so we need to start dedicating our resources to preserving him.

If we don’t, the road course ringer will be extinct nearly a decade after its prime. I doubt they’ll hang pictures of Scott Pruett and Ron Fellows in museums like they do for the dodo bird and sabertooth tiger, though. Ultimately, the ringer will probably be forgotten.

Maybe for good reason; no road course ringer has won a Sprint Cup race since Mark Donahue won at Riverside in 1973. The lack of victories didn’t stop car owners from replacing their full-time drivers with specialists for decades thereafter, though. For many owners it made sense. Why have Michael Waltrip wreck 10 people and then himself when Fellows is available to run in the top 10? He isn’t Jeff Gordon, isn’t going to win, but he isn’t going to embarrass you, either. In the 1990s, many teams far back in the standings used the tactic to score some points so when they qualified slow at the next oval, they had enough owner points to have a provisional on which to fall back.

Ten years ago, the trend hit its peak. In the 2004 Sonoma race, nine ringers participated — a number that is unimaginable today and we may never see again. On Sunday, there were three — Said, Alex Kennedy and Tomy Drissi. Said led the way with a 35th-place finish. He was off the pace all day and did a nice spin through turn 11. Kennedy broke a rear-end gear and Drissi might still be on the track completing his last lap.

It’s quite the contrast from the third-place finish we saw from Pruett in the 2004 race. Pruett was driving an extra Chip Ganassi entry that day. That was commonplace back then, but would seem insane today. I guess Roger Penske decided to spare everyone by not putting Jacques Villeneuve in the No. 12 car for one race with nothing to lose. He would’ve wrecked more cars than Dale Earnhardt, Jr. did on Sunday.

Fielding that extra entry for a road course ringer no longer makes sense because that top-10- to 15-run owners used to be able to count on can’t be anymore. The average Sprint Cup driver can handle him or herself on a road course now, and as the last decade has proven, can win if put in the right position. These aren’t your mother’s road racers; these guys are all really good.

That’s another reason the ringer is on the edge of extinction. How are you going to jump in a car you race only once or twice a year and beat a Sprint Cup driver? You’re not. Said beat A.J. Allmendinger and David Ragan on Sunday because they both were involved in accidents. The highest finishing ringer didn’t beat a single Cup regular who didn’t crash or have a mechanical issue.

The Chase for the Sprint Cup has also played a role in the trend. This year for example, wins are everything, but only if you’re in the top 30 in points and participate in all the races. Tommy Kendall isn’t getting you in the Chase, but if David Gilliland plays the strategy right and has a little luck, he might.

Said and Drissi aren’t exactly spring chickens. Said is 51 and Drissi is 55, which could mean any road course coming up soon could be their last. Said also hasn’t been competitive in a while, finishing outside the top 20 in six of his last seven attempts.

Said’s legacy will be that he taught about half of today’s garage how to get around a road course, including stars like Carl Edwards, Kevin Harvick and Kasey Kahne. Ironically, he helped improve a lot of the drivers that are kicking his butt today.

That was a bad idea, Boris. Someone get the cage. It’s going to have to be big with lots of hair room. Rick Hendrick, we need an extra car for Watkins Glen. We can’t let this species die off without a fight.

I cannot see how the average driver becoming more skilled over time is anything but a positive. No more ringers, so what.

I agree with JohnQ. Never liked the ringers because they can wreak havoc on the field. Won’t miss them at all. Good riddance.

Boy, feel the love. I don’t remember Ron Fellows wreaking havoc. Nobody likes diverse fields anymore. They all want to see their same top-5 t-shirt sellers every week and that’s it. Execs with that kind of attitude are the reason there is no Foyt or Andretti running national events everywhere. NASCAR only, sa-LUTE!

I did. Those guys didn’t have to worry about points so they would be extra agressive and could sometimes ruin a regular drivers race. You know, sort of like cup guys can do in the the NW series or truck races.

I have NEVER agreed with the idea of putting a substitute driver in unless it’s for medical reasons. A champion doesn’t skip a race.