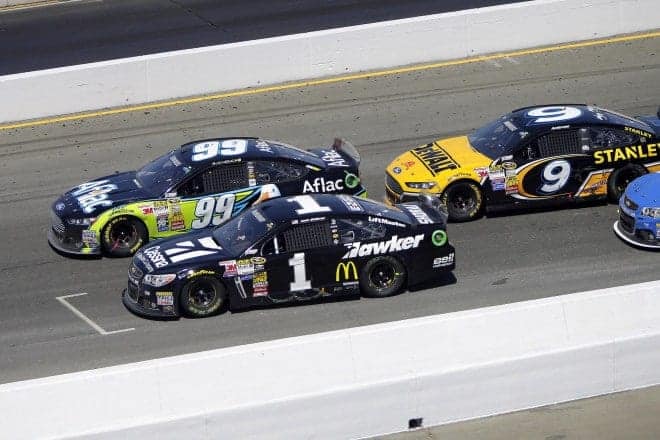 Another stop in California left the road course specialists of the NASCAR Sprint Cup Series wishing for another try.  They’ll get one eventually, but for now, the Chase picture remains unchanged.

Carl Edwards added another victory, a first ever at Sonoma, and helped Roush Fenway Racing get back in the win column.  Next up is Kentucky Speedway, where it’s back to making left turns and likely a return to watching the stars of Cup lead the way from start to finish.

This edition of Who’s Hot and Who’s Not shows that there is a steep learning curve involved in navigating a 3,000-plus-pound stock car around a place like Sonoma.  Road course ringers and rookies watch out; it’s harder than Edwards makes it look.

That’s what all of the top points-getters who haven’t earned their breakthrough wins should have said after the Toyota / Save Mart 350(k).  In adding a second winner sticker to his collection, Cousin Edwards took measures toward preventing a group of one-track ponies from rocking the Cup world.  Drivers on the proverbial bubble right now (Greg Biffle and Kasey Kahne) aren’t as nervous as they would be had someone like Marcos Ambrose or Danica Patrick crashed the party.  As much fun as it would be if Tomy Drissi made a mockery of NASCAR’s new Chase format, Edwards’ win kept things real.

Edwards has been on the cusp of road course glory for years.  Whether it was his six combined top 5s at Sonoma and Watkins Glen before Sunday or his 2007 venture into a sand trap while in hot pursuit of a victorious Tony Stewart at the Glen, Edwards was always just short of trip to the winner’s circle.  Now the pressure has dissipated along with questions swirling about the recent lack of performance from *Roush Fenway Racing*.  Edwards’ ability to put those issues to bed and end Hendrick Motorsports’ five-race streak bodes well for the No. 99 team moving forward.

Edwards’ history at Kentucky Speedway doesn’t inspire awe by any means (one top five and a 15.3 average finish), but there are several less likely candidates to steal the show Saturday night.  It’s hard to bank against HMS going six-for-seven in the Bluegrass State, given that Jimmie Johnson and Kahne typically have a little blue on their cars — and they’re good there too.

Jamie McMurray waited until the final lap to bust out a 96.350 mph lap — breaking the old track record (sorry Ambrose, your old 95.262 mph circuit isn’t so hot anymore) — enough to put both Chip Ganassi Racing entries top 3 on the grid.  There’s nothing wrong with making a little history, but McMurray simply couldn’t make the most of his pole starting spot.  OK, maybe that’s a little harsh; after all, he would have needed a win to do that.  By placing fourth, McMurray did post his best result in wine country in 10 years, however.  Surely, that’s something to toast.

It’s hard to forecast McMurray’s future because his results spectrum is as varied as almost any driver’s is, but in order for his quasi-summer success tour to continue in round 17, he must to tap into the mindset and setup that brought a runner-up finish in last season’s Kentucky event.  The assumption that McMurray will be able to do that is a little farfetched given that his two attempts prior to 2013 ended with a 15th and 36th.

There is a pair of teammates that would appear to be sure bets in comparison.  Kyle Busch and Matt Kenseth have combined to win two of the three races in the track’s history and have recorded top 10s in every date.  So what’s stopping them from taking the gauntlet?  For Kenseth, it’s a tire barrier and a cloud of sand in Sonoma, and for Busch, it’s Sonoma and every other locale that the series has visited since Charlotte.  In fact, it hardly seems right to even consider putting them in this portion of Hot or Not, but their Kentucky highlight reels are too pretty not to look at.

Some drivers just don’t get road course racing, and Denny Hamlin is one of them.  Judging by wild spin through traffic in turn 11, things aren’t going to change anytime soon.  It’s strange that Hamlin can have success at every other venue type and be completely inept at a place like Sonoma, but the numbers don’t lie: no finish better than 23rd in five years.  No wonder he tried to burn the place down  in 2013.

Hamlin could very well turn things around at Kentucky.  The challenge will be forgetting about almost everything that happened to him the last Quaker State 400.  First, the No. 11 lost a tire, and then the casing came off and went rogue, attempting to cause a big one by rolling up into the leaders.  It’s unclear which was more embarrassing — Hamlin almost losing control driving back to get replacement rubber or the accident that later left him with a DNF.  Either way, bad memories were overly abundant that day.

Hamlin isn’t the only one who struggled to grasp the concept of right turns.  For the 2014 rookies Sonoma was an alarming wakeup call.  Even Kyle Larson, who has amazed with top 10s at some of NASCAR’s most technical ovals, failed to navigate the course well enough to take advantage of a second row starting position.

Austin Dillon took home rookie honors with an uninspiring 17th, beating out the others, who, headed by Cole Whitt (27th), finished at the tail end of the lead lap, or worse.

AJ Allmendinger had a chance to make his season into something special and he blew it.  There’s no way around it.  Allmendinger’s struggles recently show that JTG-Daugherty Racing’s No. 47 effort is nothing more than a mid-pack ride most weeks in the hands of the caliber of driver that the organization seems to be able to attract.  So when the stars align — Sonoma, a place where even ringers have been competitive against stock car’s elite, and Allmendinger, a former open wheel driver with plenty of experience on road courses — there’s a very small window to achieve the near-impossible: make the Chase as a single-car operation.

Allmendinger flashed his pedigree with a second-place time in qualifying, and then proceeded to lead a race-high 35 laps.  That’s incredible, except it didn’t last.  By the time the checkered flag waved, his Chevrolet was very dinged up after its starring role in a multi-car accident.

Now, it’s back to reality for Allmendinger.  Reality is Kentucky and it’s a return to a realm where his most notable moments are mistakes.  As demoralizing as it must feel to finish in the mid-20s week after week, at least Allmendinger has someone he can relate to: Ricky Stenhouse, Jr..

Where Edwards is the shining beacon of hope for RFR now, Stenhouse is the reason why the organization has more than a few doubters.  The No. 17 can’t seem to crack the top 10 in a non-restrictor plate track despite having the same equipment as the No. 99.  There is no fancy A-team vs. B-team algorithm to help explain the difference between Edwards (sixth in points) and Stenhouse (27th and falling).  Stenhouse isn’t taking care of business and that’s the bottom line.

The decline of RFR has certainly been the drum beat in recent weeks and with good reason. That being said, I’ll be interested to see how the Gibbs cars run in the next 10 weeks. I’m not sure I remember the last time their cars seemed so ordinary. While the Chase seems a likely possibility for all three cars, I can’t see them making noise the way they are running now. They seem to be stuck for long stretches of races in the 8th-15th positions. Even the two wins were a product of some good fortune (JJ’s tire going down late at Fontana handing Kyle a win and Denny winning the usual crapshoot at ‘Dega). I wonder if the 4th car talk is having an impact. Also, I wonder if the back injury is still plaguing Hamlin.