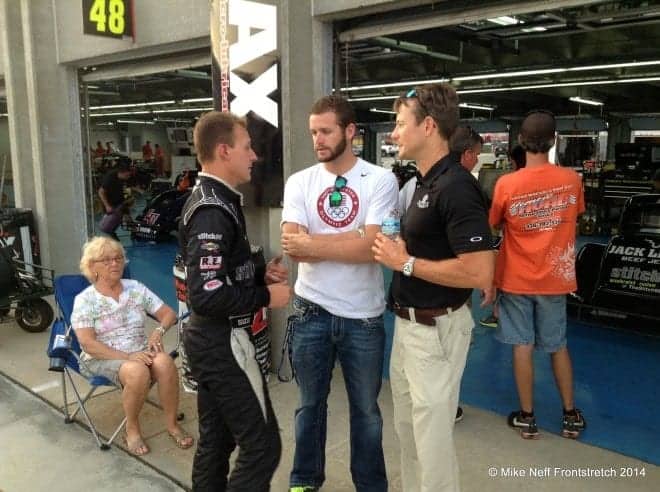 These articles are normally called Beyond the Cockpit. Today’s offering is called Beyond the Pool because we’re speaking with Tyler Clary, Olympic gold medalist in swimming. He holds the Olympic record in the 200 meter backstroke and is preparing to defend it in the 2016 games. Similar to tennis and gymnastics, swimming is a young person’s sport for the most part. There are always exceptions but most of the top swimmers are done well before their 40th birthday. Clary knows that is the case and he is already preparing to start a second career even as the curtain is still up on his swimming career.

Clary has relocated to the Charlotte, NC area to align himself more closely with the area of the country where he can chase his racing dream most successfully. He is looking to turn as many laps as possible in as many different forms of cars to catch up to the other drivers his age that have been doing this for many more years. This isn’t a lark for Clary. He has worked with a race team before and he has wanted to race since he was a child.

Clary visited the Summer Shootout at Charlotte Motor Speedway to explore the possibilities of racing Legends cars as part of his development program. While there he took some time to speak with Frontstretch about his desire to chase this new career as his life progresses.

Mike Neff: What brings you to Charlotte Motor Speedway for the Summer Shootout?

Tyler Clary: I want to make this my new workplace. It is fun being at the pool all of the time but staring at a black line for hours on end can get a little old. I have a feeling that racing will be a little more exciting. I’ve been around racing since I was a little kid and I want to make it my next profession, ideally.

Neff: You were around racing as a little kid. Where did you grow up?

Clary: I grew up in Southern California, really close to Fontana. When I first started swimming my club team had trouble raising funds. One of the programs that Fontana runs is you can run a merchandising booth for a weekend and you get to keep a cut of the profits for doing so. That was how we raised funds so I was always around it and loved it.

Neff: Did you do any kind of racing when you were growing up? Go-karts or anything like that?

Clary: No, I was always so involved with swimming that we never really had the time nor was my family ever in the position to afford anything like that. Now that I have had a little bit of success in the pool I might be able to parlay that into some success on the race track. I’ve wanted to do it ever since I was a little kid but never had a chance to get into any kind of a race car until after the London Olympic games.

Neff: I understand that you recently relocated to the Charlotte area. Was that for focus on your racing efforts or were you drawn by the outstanding swimming opportunities here?

Clary: It is a little bit of both. I needed something a little different with my training program. Also, the general reaction that I have received from people when I tell them that I want to go racing is: “Is this a publicity stunt or are you doing it as a hobby?” I definitely don’t want either of those things. I want it to literally become my next profession and this move was strategic to help people realize that I am committed and serious about it. The reception has been positive so far.

Neff: You are still training for the 2016 Olympics, correct?

Clary: Right, absolutely. That is one of the things that is really cool about this series in particular. Not only is there so much you can learn with US Legends Cars, but also being able to drive 45 minutes from my house and get on the race track and learn while I’m still training for the Rio Olympic games is very useful. It works out perfectly with my training schedule. I get out of practice fairly early on Tuesday nights and I don’t have Wednesday morning practice so it really couldn’t work any better than that.

Neff: That was the next question I had for you. Swimmers are known for being up very early and at the pool training. Will that tax you if you are practicing that early in the day and then racing late at night?

Clary: I used to think that. I used to work with an off-road racing team as a general hand. I did welding and fab work for them. I worked for them about 10 hours a week for the two years leading up to the Olympic games. I noticed that I am at my best when I have something on the side to take my mind away from the stresses of being a professional swimmer. Whenever you are in the pool training it is very similar to being at the race track. You are always looking for the tiniest thing that will give you a marginal gain to give you an advantage over your competitor. Being able to channel that energy into something else and give myself a hiatus from swimming is really useful for me. It helps me come into every practice with a renewed vigor and a little more intensity.

Clary: I have. The first big race I was able to attend after the Olympics was the Sonoma IndyCar race. I was able to meet several of the drivers there

and I still keep in contact with James Hinchcliffe. He has helped me a lot figuring out who I should go to and what general direction to take. Interestingly enough, one of the pools where I train every week is the same pool that Jimmie Johnson uses for training. I ran into him one day at practice and started talking to him. I’m kind of trading swimming lessons with him for driving lessons. I was at the Michigan race with him and I was with him here at Charlotte. Maybe I’m a little bit of a good luck charm since he’s won both of those races. It is really awesome to see him doing so well and I’m really privileged to call him a friend.

Neff: Outside of U.S. Legends, there are other racing opportunities throughout the region around here. Are there any plans to get into a Street Stock or Limited Late Model to try and run at Hickory or Caraway or another track around here?

Clary: My biggest disadvantage, and I want to make sure everyone knows that I realize I’m at a huge disadvantage starting so late. I know that I need as much seat time as humanly possible. Because of the success I have had in the pool, it does make it an interesting story making that transition from swimming into racing, so I may have a little more luck getting the support I need to do a bunch of different series and trying to get a lot of seat time all at once and trying to increase my lap count to somewhat match the lap count of the people I am going to be racing. U.S. Legends cars will be a great place to start and I’d love to get as much seat time in as many other races as possible.

Benny Gordon stops by and pokes a little bit of fun at Tyler.

This guy is helping me get into a Pro Cup car to try and teach me the mechanics of a race car. I’m glad to have met him a while back. He is the first person to ever give me a test in any race car. We tested in a Pro Cup car at Southern National and ran semi-fast there. Since then we’ve been keeping in contact and making some plans. Hopefully some big things will start happening.

Clary is a world class athlete and obviously has the competitive drive to be the best in the world at something. His drive and passion is obvious just from listening to him discuss the potential of becoming a race car driver. Spending time with drivers like Benny Gordon, Daniel Hemric and Jimmie Johnson can only help make him an even better competitor in race cars going forward. He has agreed, as things begin to progress with his racing career, to come back and visit with Frontstretch from time-to-time and let us know how the process is progressing.