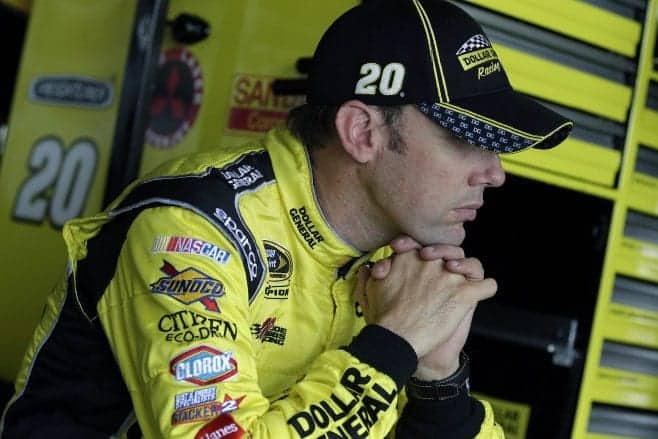 Kentucky Speedway is the site of the seventeenth round of the NASCAR Sprint Cup Series season, and with the halfway point of the season only one week away, we have a rather clear picture of who the contenders will be going forward as well as how the Chase may unfold. Kentucky is now entering it’s fourth season on the Sprint Cup circuit, and after three full races at the Sparta, KY facility, we have a pretty clear idea of what to expect out of this race every year.

It’s Saturday night, under the lights, and Chase spots are still very much up for grabs. Read on to find out how I think the 2014 Quaker State 400 will unfold.

1. Will tonight’s race provide a picture of who will be strong in the Chase?

With that in mind, tonight’s race will provide a pretty clear idea of what teams have a handle on this style of race track going forward. Obviously the mile and a halfs are all nuanced and different, but generally speaking, teams who are good on one abrasive mile and a half tend to be good on other ones. Case in point, the two dominant drivers of last year’s race at Kentucky were Matt Kenseth and Jimmie Johnson, and as we all know, they were the two principal championship contenders last year. In 2012, this race was won by none other than eventual champion Brad Keselowski. For whatever reason, if you are strong at Kentucky, you tend to be strong in the Chase as well.

With this in mind, be mindful of what drivers run well tonight and keep their performance in mind as we get closer to the Chase. Tonight’s winner could very well be a contender for the championship a few months down the line.

2. Will long green flag runs be the story of the race?

Everyone has their own personal taste when it comes to evaluating the excitement level of a race. Some folks love tight battles with lots of drafting and passing. Some enjoy grueling tire management duels where the field gets all spread out. Some just watch for the wrecks.

Regardless of what you enjoy, however, the popular sentiment in regards to the Kentucky Speedway has not been positive since the track joined the circuit in 2011. Each of the three races have been characterized by exceedingly long green flag runs where not much happens. A lot of this can be chalked up to the track’s shape: flat-ish mile and a half tracks are simply not well-suited for Cup cars.

As a result, tonight’s race will likely see much of the same. Cautions do not tend to fly much here and the race will likely get very spread out. This should reward the teams that start up front and are able to manage their track position through green flag pit cycles and such.

I could always be wrong though, the race may end up being a barnburner. Just don’t be shocked if its not

3. Is tonight’s short field a sign of things to come?

I have a hard time believing anyone missed this particular piece of news after how much the mainstream outlets harped on it, but in case you did miss it, tonight’s race will only have 42 cars as opposed to the traditional 43. This will be the first time since 2001 that a Cup race has had a short field. So yeah, not exactly awesome news.

With that being said, the lack of one car in the field will have no real impact on the race itself tonight. That position any other week would have been filled by a painfully slow team that had no impact on the race, so there’s really no story as far as that goes. The real issue is about what this represents going forward.

Frankly, I don’t think short fields are going to be as big of an issue as some are making them out to be going forward. Tonight’s race does not have an especially large purse and as such it is not an attractive race for small teams. Most races going forward will have full fields, but the reality is that a few of the less glamorous races could face this same problem, but it should really only be a few.

If nothing else, the short field issue is a wake up call to NASCAR that it needs to rework its cost structure. If the cost to race was back to where it was in the late 90s, almost every team in the garage would be flush with sponsorship and there would be 48+ teams showing up to race every week. The sport is still very popular (the sport is still around late 90s levels of popularity, which is a good thing) and is still very attractive to sponsors. Sure, it is not as popular as it was in the mid-2000s, but the sport is still incredibly viable. That is not the issue. Skyrocketing costs are the issue, and NASCAR needs to understand that short fields like the one we will see in tonight’s race could become a more frequent phenomenon if something isn’t done to fix the sport’s cost structure.

Brad Keselowski gave a very interesting interview a few weeks ago in Pocono in which he more or less said that he believed that his Penske team has the “best balance” of anyone right now on mile and a half tracks. What that essentially means is that he believes Penske has the best handling race cars in the garage right now, and with how bumpy Kentucky is, handling and “balance” will be crucial.

Looking at the practice sheets, I’m inclined to believe that Mr. Keselowski is right. The #2 car had the fastest time in final practice and his teammate Joey Logano was 4th fastest. Not only that, but the Penske cars won on the other two abrasive mile and half tracks that the series visited earlier this season (Keselowski at Vegas and Logano at Texas).

My prediction is that the Penske pilots will be the class of the field tonight. As for which one will win, I’m leaning towards Keselowski simply because he is a previous winner here and has been slightly better as of late than Logano.