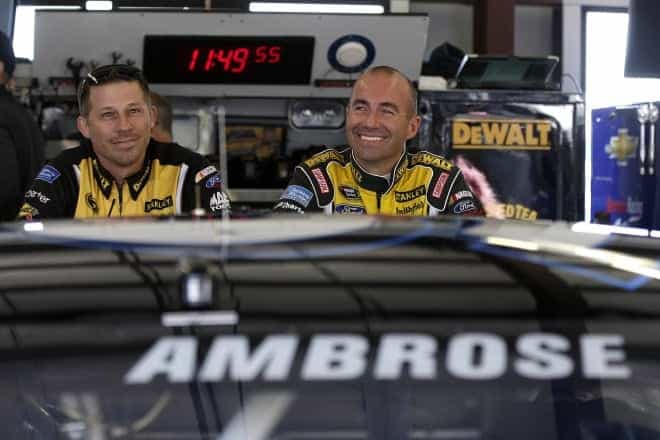 Drew Blickensderfer has been on the box for Marcos Ambrose for nearly two years. He’s seen his driver come close to the elusive oval win. He’s also watched what he can do with a stock car on a road course. All the while he’s been building up his own resume as a Cup series crew chief and getting better with Ambrose behind the wheel. They’ve scored their first two Top 5s together this season. With the new Chase rules they hope to be in the title hunt at the end of the second Richmond race thanks to their ability to not only win Watkins Glen, but on an oval as well.

This week, Blickensderfer is the guest crew chief for Tech Talk. He revisits Sonoma, tells us what went wrong, how they tried to save rear tires, preparing for the bumps at Kentucky, why cars were damaging rear tires early this season and the lack of tire wear this coming weekend.

Mike Neff: You had a Top 10 at Sonoma, which I’m sure is not what you really felt you would have. Did you feel like you had a car that could win the race or were you just off that little bit all day?

Drew Blickensderfer: We worked hard at getting our car to last on long runs. We’ve proven that Marcos can sit on poles and run fast for a few laps but that isn’t what is going to win there. We got ourselves in position and, previously in the race, on lap tracker we were faster than Carl on long runs and we thought we were going to be ok but that last restart, when we got shuffled out a bit, we kind of burned our stuff up early and faded. You are obviously disappointed when you don’t win on a road course with Marcos on a road course. He’s probably the best stock car road racer in the world. Sonoma just wears tires out really badly and we struggle there a little bit. Watkins Glen will probably be different for us and we are looking forward to it.

Neff: The rear tire fall-off was something that everybody battled all weekend. Is that just the nature of the beast or is that something you can adjust for in setup to make them last longer?

Blickensderfer: You can adjust for it a little bit. You can make your stuff really soft and it is going to flop and carry tires and stuff like that. You don’t want that to happen because you can’t run a quick time that way. Marcos is used to V8 cars and open wheel cars in Europe. Those cars are rigid. They feel like go-karts and they change directions real well. If you change direction real well you are eating up rear tires. We decided to make our car real floppy and hopefully save rear tires. Sonoma is unique. Marcos has never raced anywhere that you lost even a half a second a lap on a fuel run, let alone three and a half seconds. It is unique and it is challenging. I think that is why you see stock car guys do better there than road racers because they come from a background of saving tires. Saving tires is not a specialty of ours.

Neff: Junior managed to finish Top 3 with five pit stops. Is that the result of a perfect storm with caution timing or is that something that, with the tire fall-off as it is, we may see people employing in the future running three or four pit stops?

Blickensderfer: I think you’ll see that. The problem is, everybody wants to pit multiple times early in the race but, when it gets to 40 to go and you can make it to the end on fuel, everybody stops. With 10 to go, if you pit, you’re going to get shuffled back to 10th or 11th. You usually see people with newer tires get back up to seventh or eighth, Biffle finished right behind us with fresher tires, but you don’t see them win the race. That’s obviously proof. Carl won the race on a two-stop strategy and I think the majority of guys who will win that race will win it on two-stops.

Neff: We are headed off to Kentucky. The keyword for Kentucky this week has been bumpy. When you are setting up for a track that is that bumpy, as you said when it is rigid it reacts better and you want it to be as rigid as possible, do you have to build in more rebound just to tolerate the waves and bumps in that track?

Neff: Speaking of the bumps. With the new ride height rule, you were able to start it right on the earth at Pocono and Michigan. Are you going to have to start it up two or three inches higher for the rebound to work properly for you to navigate the bumps and allow the nose to slam down a little further?

Blickensderfer: For sure we’ll start higher because that will give us a little bit of forgiveness. The problem with that is that your splitter is higher and your car drives much worse. That is the challenge at Kentucky and the guy that has the best splitter control, but can get across the bumps will most likely be the winner. It is a balance there more than it is in a lot of places of trying to get grip and . The world is so aero based right now that we have to make sure we have the best splitter control. Is always a challenge.

Neff: We race at night. When you race at night the temperature is cooler and you get more grip and horsepower. Speeds up and more grip, does that cause your tires to wear out faster than they would on a hot, slick daytime or do the cooler temperatures keep the tire temps low so that they last longer?

Blickensderfer: They’ll last longer. Kentucky isn’t huge on tire wear. You’ll see a lot of two-tire and gas only strategies there. What causes tires to wear out is when they slide across the race track. When the weather cools down and you get more stuck to the race track so it usually wears a little less.

Neff: Any other twists or turns that are thrown at you by racing at night vs. the daytime at Kentucky?

Blickensderfer: Not tremendously, the problem there is that we practice during the day and race at night. Usually your balance changes quite a bit. Our balance is based off of lap time now moreso than it has ever been. If you practice during the day and you are running a slower lap time and then you get in the race and run a faster lap time, your handling is going to change quite a bit. Racing at night is always a challenge that way. You have to try and compare your lap time to what it was the year before and how much you picked up in practice vs. the year before and try and judge. So you know how to set your splitter gaps, and ride height. All of these things will equal out hopefully.

Neff: You talked about your previous years’ lap times. You obviously have some pretty extensive notes for every race when you roll into town for the weekend. How accessible is that information when you are on the box, or do you have to have studied it up before they start parading before the race?

Blickensderfer: You know it right away. We can pull up the lap tracker from last race, from this race or anything else. At the end of Sonoma we knew during the least 10 laps of a run that we were faster than Carl on the previous two runs. If we had a late race caution we felt like we could beat him. We have instant access to a lot of that data.

Neff: Earlier in the year they gave the teams more rear camber. It seemed like that took a tole on some parts. You saw more rear end failures than we had in a long time but that seems to have gone away. Has everyone gotten a handle on where the new stresses were with the rear camber now?

Blickensderfer: They actually added it last year. This year we have more rear downforce than we did last year. I think you saw a lot of tire failures earlier this year because people were pushing that. When you have all of that camber in the tire and you take all of the air out of the tire to try and get grip at places like California and you have more rear downforce now and it puts a lot more stress on the sidewall of the tire. What happens is you damage the sidewall of the tire on lap two or three of the run. However you don’t know it for 25 or 30 laps. At the end of the run, when it builds up, that damage takes its toll on the tire and it blows. I think that is what you saw multiple times at California and a couple of times at Las Vegas. It bit us at California. Extra downforce, low tire pressure, all of that camber and then running across the apron causes some of that issue. I think there was a three or four week period where people had to adjust to the added downforce and rethink what they were doing with air pressure and camber and things like that. Now people have adjusted so I don’t imagine we’ll have any failures.

Blickensderfer has scored one Top 5 at Kentucky in his career, with Carl Edwards in 2010. He and Ambrose would like nothing more than to notch their first Cup Top 5 at Kentucky and make it a win that puts them in the Chase and gets the monkey off of Ambrose’s back on ovals. If his setup can overcome the bumps and his strategy puts them in contention to win at the end, it just might happen. If it doesn’t, there is always Daytona, where Blickensderfer has notched two of his three career wins in the Cup series.