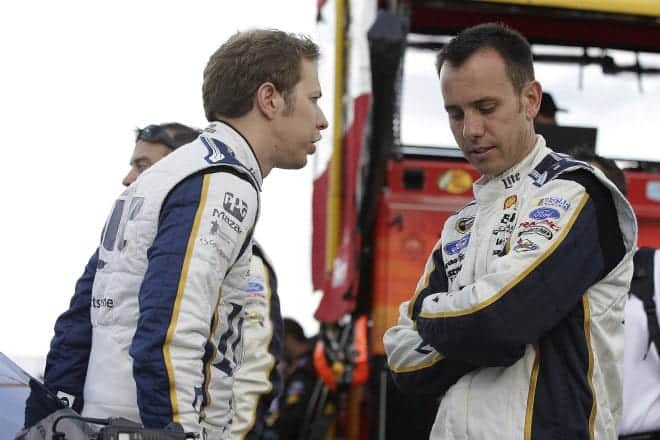 Hendrick Motorsports went on a tear at the intermediate tracks recently, leaving us, at times, to  question if anyone else had anything for the team that seemed to be hitting on everything with the new rules package. The Quaker State 400 at Kentucky Speedway proved that conclusions shouldn’t be drawn for year’s end just yet.

Sure, Kentucky is not a track that the Hendrick organization has performed their best at in the track’s short Cup series history. Nevertheless, it is a style of track that has played into their hands lately. As it turned out, they failed to even have a chance against both Penske cars and, late in the race, Kyle Busch’s Joe Gibbs Racing Toyota.

These results show that the competition at the intermediate tracks may be more up for grabs for the rest of the season. Roger Penske’s group put on a clinic Saturday night and continues to show that they may not be as far behind with innovation as many were starting to think. Remember when the first five races featured five different winners for five different teams? It went back to that type of evenly matched competition a little more for this particular race, and could be a sign of the future.  Brad Keselowski’s crew chief Paul Wolfe echoed that they are hitting on some aspects better as they go along.

“We’re about halfway through the season now, and with the new rules package, I feel like Team Penske has done a great job at responding to the rule changes,” said Wolfe.  “But there’s still a lot to be learned or gained with this package, so it’s important for us to continue to work hard and keep building off of this momentum as we get ready to run for another championship.”

Kentucky was a bit unique with its bumpier layout, making it more of a drivers’ track. Keselowski indicated that the significance of the win will translate into good results later in the season.

Meanwhile, Joe Gibbs Racing turned in some solid performances with their Toyotas, a manufacturer that has only won twice at the Cup level so far in 2014. However, Matt Kenseth pointed out post-race that there is still more that needs to be done about these cars. Despite the increased drivability at this track compared to some other intermediate layouts and surfaces, the 2003 champion spoke about how hard it still was to pass a couple laps following a restart. He continued by saying that the dependency on aerodynamics contribute to the cause even with the rule changes.

Something that is always promising is seeing a diverse mix of drivers having a shot at the win. Ryan Newman also turned in a stellar effort, hig first top-5 finish of the year with the fairly quiet Richard Childress Racing team. Paul Menard has recently had some decent efforts, but Newman’s performance was the boost the team needed.  Despite his third-place finish, Newman says that the team as well as NASCAR still have something to build upon.

“It’s got to be a combination of the downforce and the tires,” said Newman.  “You can’t just leave the hard tires on it and take downforce off.  I took my crew chief to Kokomo Speedway Sunday night after Michigan, watched guys run midgets on dirt sideways turning to the right and saw one of the best races I’ve seen all year long, and they had no downforce and they had a huge power-to-weight ratio, 375 horsepower with 900-pound race cars.  To me that’s the direction we should always go.”

Perhaps it may be a little much to compare NASCAR Sprint Cup Series racing on intermediate tracks to the dirt tracks, but when some factors take precedence over driver ability, it shows when one team hits on innovation and technology before the others.  The Hendrick organization will ultimately deliver at times anyway, with them having some of the most talented drivers and crews in the garage.  Either way, the major players in the field are bound to even out from race to race like what was beginning to be seen with Kentucky.  Once again, Wolfe had similar words.

“I think any time there’s a new rule change you’ll see maybe certain teams that kind of stand out until guys get caught up,” said Wolfe.  “Yeah, it seems like maybe there’s a little more separation in the field right now, but I think over time that will continue to close up.  I think that’s kind of been the trend over the years any time there’s big rule changes.”

The previous race at Sonoma mixed things up, and Daytona next weekend most likely will as well. However, tracks coming up that continue to have horsepower and handling come more into play could now have multiple teams that contend for the win.  And with the Chase containing five races on 1.5-mile tracks, do not expect it to be a runaway by one multi-car team.

Aaron McCreed does Kyle Busch’s Joe Gibbs Racing Toyota use GoodYear tires and Sunoco Race Fuel? Not sure I see the point of this article. How could you count out any team when your championship is determined by one race where anything from a big wreck to a slow pit stop can effect the outcome? They may as well rock paper scissors for the Cup.

I would suggest rock, paper, scissors, lizard, spock would be better. Google it to learn more.

Michael in SoCal
Reply to  Bill B

Ha! I’m sure this is Sheldon approved.

i agree. new format is a joke