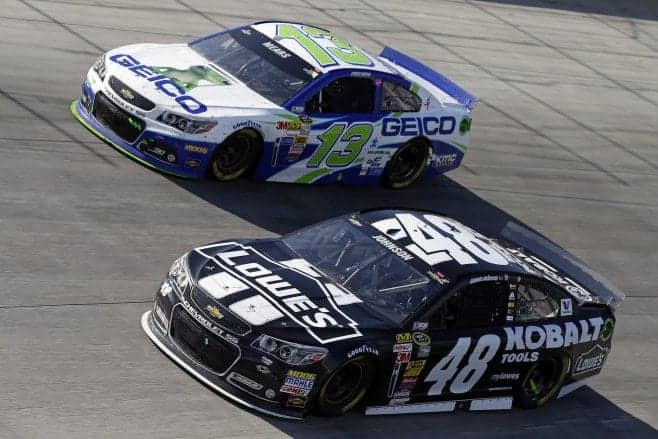 There are many different opinions regarding the new points system. Some love it. Some hate it. Some have just given up trying to keep up with all the changes. Regardless of your opinion, though, we all have one thing in common regarding this brand new format: We have absolutely no clue what is going to happen.

Oh of course we know the rules. The points get reset, they run a few races, the points are reset again, they run a few races …. rinse and repeat until we reach Homestead where only four drivers are still in contention and the points are reset to zero one final time for those final four contenders. That’s pretty obvious, and I think it’s safe to assume the end result is going to be fantastic. But what did last week’s race have to do with Homestead? How are we to know who the real “players” are going to be? At this point in the season, we would normally have a somewhat clear idea. Now? Heck, we’re just having to watch each and every race knowing full well the champion could wind up being someone we never even considered in the first place.

So, why, then do I feel confident saying that a Brad Keselowski vs. Jimmie Johnson showdown is becoming a very real possibility, knowing full well that, well, I don’t really know anything about how this will all shake out?

Let me break it down for you.

Based on current performance, the final four drivers would be Jimmie Johnson, Kevin Harvick, Brad Keselowski, and Joey Logano. That’s not an “as they run” statistic. Based on performance alone, those are the logical choices for the drivers who are strongest right now. Those are the top four lap leaders so far this year and each of them has at least two wins.

The reason I’m not chiseling their names in the stone right now, though, is because the elimination system is going to be, I think, brutal. I believe there will be a sort of “checkers or wreckers” mentality the drivers will face, and, while the wins will be rewarding in allowing drivers to advance to the next round, the bad days will be equally as damaging. Not that they weren’t before, but I believe this new points system will mean a blown engine or crash will spell the end of a championship hope unless they are able to win the very next week. Even then, it might be too late. Now, think about how many bad days Harvick has had. What about Logano and a smidge of inconsistency that has him just a couple spots ahead of Harvick in the “regular” points? They are both winners this season, but they just haven’t been able to close the deal as often as they should have.

I wouldn’t be surprised if Logano and Harvick were still there at the end, but it will be just as easy to forget about them if they aren’t.

Now … Johnson and Keselowski are kind of different. I don’t have to explain to you Johnson’s ability to seal the deal when they need his team needs it most—to assess the situation and react as necessary. They will swear up and down that they don’t have a game plan heading into each race and that they give 100% every lap, and that might have some truth to it, but there is a reason you won’t see Johnson take it three-wide on a restart after only 100 laps. He paces himself wonderfully. So Johnson is nearly a lock for Homestead just because the history of this race team putting themselves in the right place at the right time better than anyone else.

And Keselowski? I feel like I’m going more out on a limb with him, but here’s why another Keselowski vs. Johnson championship wouldn’t surprise me. Keselowski seems to have a fantastic balance of youth and maturity right now. He’s still youthful and wily enough to take risks, ones that make the fans audibly gasp. Yet he’s still mature and seasoned enough for those risks to be calculated and he doesn’t have the same air of recklessness that he used to.

Now, I’m not saying Johnson and Co. don’t take risks, but with Keselowski it’s just … different. With Johnson the risks seem to be more watered down, with every i dotted and t crossed. It’s not a calculated risk as much as it is carefully executed. With Keselowski and the No. 2 team, of course the team does their homework, but always seems to come down more to “oh, screw it, we’re just gonna go for it” or something dangerously close to it.

That sort of approach could wind up costing the No. 2 team the championship, of course, but is there a better time to do just that than with the announcement of a Chase system that rewards exactly that type of thinking? Certainly not. Of course, the calculated and smooth decisions of the 48 team will work in their favor as well, as they will get neither cocky nor panicked as the green flag of Homestead approaches. New Chase system or not, they are still champions and carry themselves as such.

With that said, there are still many, many, many more races to be run until Homestead and who knows if new players will emerge. Honestly, though, I highly doubt it. Even with the new system, the major players have already been well-established. It’s which of them will remain through all the obstacles NASCAR has now thrown in their path since then that remains the real question.

Let’s also not forget how much fun the 2012 Johnson vs. Keselowski championship was either. You had the mixture of seasoned veteran next to the wily kid and the deck was stacked in Keselowski’s favor yet Johnson still appeared to have an advantage because of his experience. Where Johnson knew all the right things to say, Keselowski knew how to play to an audience. And, oh, who can forget the night when Keselowski won the championship, went on SportsCenter to do an interview, was drinking live on the air, and clearly had already enjoyed quite a bit of alcohol even prior to that?

Now imagine Keselowski in a situation where he has to beat Johnson and two others who are just as capable of winning.

Oh come on, admit it. You know you’re excited.

If Jimmie wins again, what changes will nascar make next year? Will the top 35 make the chase? Will they do away with the chase? Road courses?

Don’t forget about Dale Jr. and what that would mean for next year with NBC starting up. Remember, this is all a show with nascar using yellow flags and post race penalties that affect the outcome. There’s not a lot of love between nascar and Kez.

You feel confident because you have such a belly full of NASCAR Kool Aid that you cannot admit that the “Chase” is as much a game of chance as roulette. The luck involved seriously outweighs any skill involved. A car 90 laps down spinning in front of the leaders 10 laps before the end of the season’s last checkered flag, or a manipulation caution to give us the beloved GWC are as likely to decide the champion as any drivers particular skill level. Do you pay attention at all?