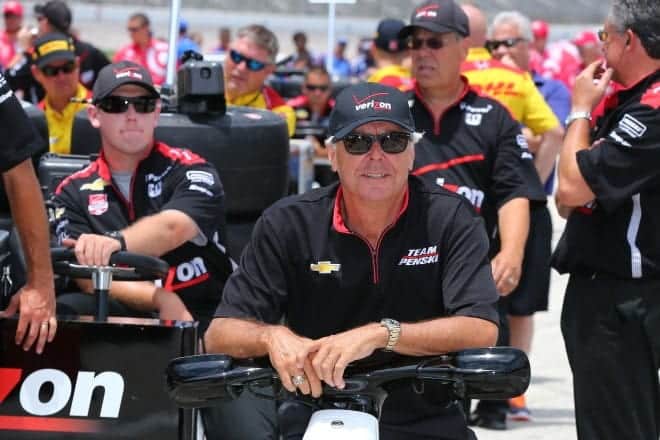 Over the years in open-wheel racing, there have been drivers who have climbed behind the wheel and made an impact that will last for many years down the road — like, for instance, Kansas native Rick Mears.

“My dad was a pretty successful short-track racer in the Midwest when I was growing up,” Mears told Frontstretch. “He raced around our home state of Kansas, Oklahoma, etc.”

Mears ended up moving from Kansas to Bakersfield, Calif. — and that’s when his own racing career began.

“(My brother) Roger raced stock cars and I ran motorcycles to begin with,” he said. “Then we moved into off-road racing. We won at Baja and Pikes Peak. That was all we ever thought about doing.”

Racing off-road, the concept of open-wheel racing wasn’t a major thought on his mind. However, that all changed when he was offered a shot to run in IndyCar from Bill Simpson in the late 1970s.

“The Indianapolis 500 is such a spectacle, such a huge event, that it kind of draws you to it,” he noted. “So once I got the opportunity to get into open-wheel, the Indy 500 became a big goal of mine.”

The speed and ability that he showed while driving caught the attention of Roger Penske, with Penske offering Mears a ride for nine of the 18 races on the schedule in 1978. His talent behind the wheel was noticed immediately as he would score his first career open-wheel victory in the Rex Mays 150 in his second start with Penske.

A pair of wins to finish off the year in 1978 led to a successful championship season in 1979, which also saw Mears pick up his first of four Indianapolis 500 victories.

“Each Indy 500 win is special in its own way,” Mears said of the four victories in the so-called “Greatest Spectacle of Racing.” “The first time you do anything is a feeling that you will never have again, so the first one is hard to beat. But, you know, the last one is an amazing feeling as well. You wonder if you can ever do it again and to do something that only three other drivers have ever done in the long history of the Indy 500 is pretty special.”

Mears is still actively involved in the sport, though, as he currently works with Team Penske, helping with its program as an adviser.

Last month, Mears spotted for Helio Castroneves at the Indianapolis 500 as Castroneves brought back the famous “Yellow Submarine” paint scheme that Mears made famous in the ’80s.

“I thought it was great,” Mears said. “You know, Helio came to me months ago with the idea of running it, right down to the look of my helmet. I was on board from the get-go. It was great to see the car back on the track. Seeing it on the track at Indianapolis is definitely the closest thing I will have to a comeback! I just wish it would’ve finished one spot better.”

Reflecting back on Castroneves’ runner-up finish, Mears said that he was excited over the final laps, but also as disappointed as Castroneves was after the race.

“In those situations, as a spotter, you want to make sure you are giving your driver enough information without becoming a distraction,” he added. “He needed to be able to focus on the job. But I was really hoping that we would have another member of the four-time Indianapolis 500 winners club.”

Being around open-wheel racing for 30 years and staying involved also allows for perspective. Mears says he believes the racing we have currently is some of the best ever.

“The racing in the Verizon IndyCar Series is some of the best in the world. I really mean that,” he said. “It’s hard to ignore the fact, however, that we are still reeling from the CART/IRL split. We have everyone pulling in the same direction to get us back to the glory days, but it’s going to take a little bit of work. We have a diverse field of very talented drivers that have great personalities.”

Mears added that the competition is still as apparent now as it was than, but the biggest difference these days is the cars themselves.

“We have one chassis supplier and two engine suppliers,” he said. “When you have everyone working off the same tools, it puts everyone really close together in terms of speed. The closeness in speed that we have here is really amazing. We’re talking hundredths of a second between winning and finishing fifth.”

Very nice column about a truly classy gentleman – thank you!

Great column. I’ve had the pleasure of meeting Mr. Mears on several occasions and he is a truly classy gentleman as DeniseW points out above. Legend is a word used far too lightly now but in his case it’s the perfect description.