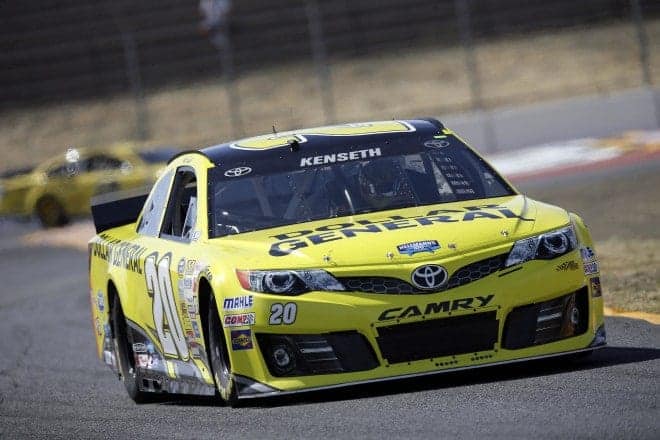 After news leaked last week via Sports Business Daily that Home Depot was not likely to return to the No. 20 next season, Joe Gibbs Racing needed a little good news on the sponsorship front.  They got some last weekend.
Prior to Saturday’s Quaker State 400, Joe Gibbs Racing announced that current co-primary sponsor Dollar General has signed a multi-year contact extension that will see the discount chain remain as the primary sponsor of Matt Kenseth’s No. 20.  The number of races for Dollar General will increase from 27 to 30 per season as part of the deal.  In addition to Dollar General re-upping, driver Matt Kenseth has also inked a contract extension that will see him continue as driver of the No. 20 Toyota.
Kenseth is very happy to continue on with JGR.”Extending my deal with JGR is exciting and I’m still hoping we can match our win total from last year, but it’s really been a special year-and-a-half together,” Kenseth said before the race.  “Joe and J.D. have been fantastic and show a commitment to providing all of us with the resources needed for a winning organization and I’ve been blessed with a great team led by Jason (Ratcliff). The support we get from TRD has been tremendous and I’m excited for the future here with the #20 Dollar General team.”
The likely departure of Home Depot (still not officially announced, but considered to be a foregone conclusion) would then leave eight open weeks of sponsorship for JGR’s Marketing Department to fill in for Kenseth.  There have not been any announcements on additional sponsorship for the No. 20 team.  When that is announced, we’ll have it for you here at Frontstretch.
Sign up for the Frontstretch Newsletter