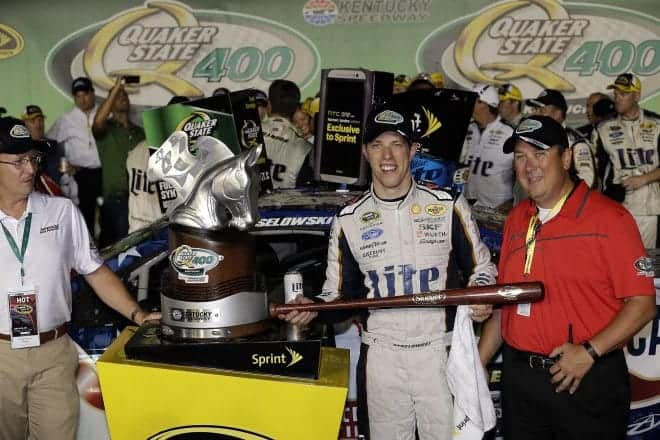 Brad Keselowski may have been a tough out on the track in Kentucky, but he was no match for a champagne bottle.  During the Victory Lane celebrations Saturday night after Keselowski’s victory in the Quaker State 400, a champagne bottle exploded after apparently striking a podium.  Shards from the bottle sliced Keselowski’s right hand, drawing a significant amount of blood.
Keselowski described the situation thusly afterwards.”We were playing around with some champagne bottles and as I told my good friend, ‘We should have stuck with beer,'” Keselowski said after the incident.  “We were having too much fun with champagne and one of the bottles broke and I cut my hand open. It’s no big deal.”
Keselowski’s wound required four stitches to close up.  However, he’s not sweating the injury with Daytona coming up next weekend.
“Do I anticipate [having problems holding the wheel,] ‑‑ no, no,” Keselowski said during his press conference.  “The last time I had stitches it was seven days or so, and we’re going to Daytona, which is probably the easiest track you could ask for.  No, I didn’t break any bones or any of that stuff.  I just put a big gash, so I don’t think it’ll be an issue.”
Sign up for the Frontstretch Newsletter

Doing something stupid is bad enough, doing it in front of a crowd is the worst. Been there.