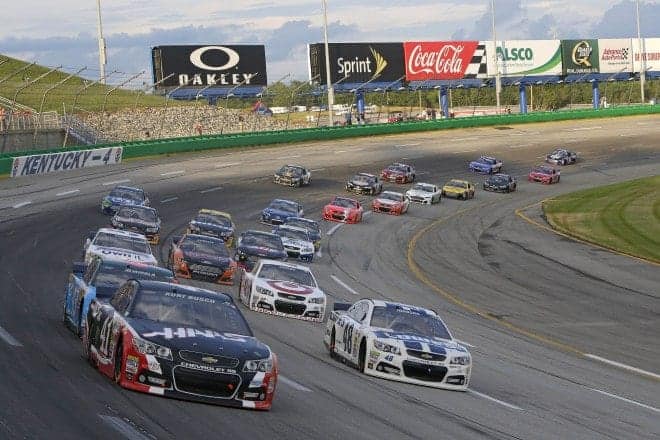 If Dale Earnhardt, Jr. hasn’t already torn up Kentucky Speedway’s surface with an excavator, the track’s general manager Mark Simendinger is going to be left with a difficult decision on whether or not to repave one of the circuit’s oldest surfaces.

Junior made it very clear how he felt after his fifth-place finish Saturday, saying the frontstretch “sucks” and later calling it a bad amusement park ride on Twitter. Earnhardt vs. Kentucky asphalt became the newest NASCAR feud last weekend, which is why it wouldn’t surprise if he stuck around a little late and drove out the excavator. He did do a solid job of remodeling the Texas Motor Speedway infield earlier this season, after all.

Earnhardt wasn’t the only one in the garage that vented afterward. While several drivers voiced support of the surface staying in the beginning of the weekend, several others seemed ready to move on after Saturday’s race.

Simendinger told reporters following the event: “We will evaluate the track at the end of the season. I’m not sure when or if we’re going to repave the track. It’s one of those deals where you will know when it has to happen.”

Let’s hope he chooses not to repave.

If you thought Saturday’s race lacked passing, wait until a new coat of asphalt is laid down — you’ll think you’re watching a train. Look no further than the last three tracks to be repaved: Kansas (2012), Michigan (2011) and Daytona (2010). Kansas just developed a second groove (sort of), Michigan is mostly single-file and a shell of what it used to be, and the handling characteristics that used to separate Daytona from Talladega were all but wiped out in the repave.

Daytona is still Daytona, but the other two tracks simply lost their identities. Drivers used to run up near the wall in the corners at Michigan. Can you picture that now? If you watch racing at Auto Club Speedway, a nearly identical two-miler, you definitely can. Auto Club hasn’t been repaved in 17 years. The same is true for Atlanta, yet those two tracks put on two of the best shows of the year. If I were creating a two-race championship, I think those two races would get the nod.

Drivers slip and slide on the older surfaces, navigate the bumps and cracks and try to figure out the fastest way around. All grooves are in play. All of that is important during a time when the competition is as close as ever. If you give Sprint Cup Series drivers one groove or even two sometimes, you’re going to watch a parade.

The main issue at Kentucky was along the frontstretch, where cars were bottoming out regularly. David Ragan wrote on Twitter that he felt like he was in a fight with a concrete jackhammer for four hours. His setup probably had as much to do with it as the track, though. With the new ride height rules — or lack of ride height rules — it magnified an issue Saturday that we didn’t hear much about a year ago. When you put the car against the ground and run harder shocks, the ride is going to be a lot bumpier.

Well I feel like I had a fight with a concrete jack hammer for 4 hours! Glad we have Sunday off, and only 1 Kentucky race. Time 2 move on!

“If you fix the start-finish line, just pave the straightaway there where it’s the roughest, I think we’d all be very grateful,” Kyle Busch said in the media center following the race.

A repave of the frontstretch, or just a portion of the frontstretch, would seemingly create more passing because the bumps are so bad now that drivers are afraid to pull out of line. But would Kentucky Speedway want to spend the money to repave only a portion of the track when the powers that be know a complete repave has to happen eventually? That might not be a wise investment.

While Simendinger said there would be a discussion about the surface, he’s also voiced support for keeping the current asphalt for as long as possible.

“It may be bumpy and it may be uncomfortable, and it may make for a long day, but it’s certainly navigable,” Simendinger told Courier Journal reporter Jonathan Lintner.

There are enough smooth tracks on the schedule now. Kentucky hasn’t been on the schedule long, but in a few short years it’s already developed a reputation as a challenge for drivers. Several of them complained about the bumps Saturday, but if the track was repaved, three times as many would complain about how they can’t pass. So let a handful of drivers complain, maybe even patch the frontstretch, but don’t strip Kentucky of its identity.

You can really tell the asphalt they use today is almost “too good”. Talladega and Charlotte’s repaves are almost 10 years old and they don’t seem to have given up too much grip. Atlanta was repaved in 1998 and by 2001 you had great racing (Harvick-Gordon) finish. I know they want these surfaces to last longer (20+ years between repaves), but I think you would gain more if you used the asphalt combos from the 1990s which seemed to come in a lot quicker.