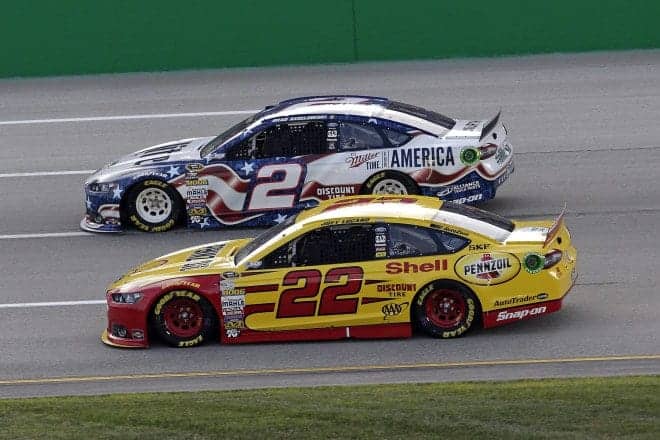 But why is that? What’s causing the problems at a track many excitedly welcomed when it was added to the Sprint Cup Series schedule?

Could it have been because Brad Keselowski was the class of the field by far? No. Is it because the track is considered a dull boring cookie cutter speedway like Charlotte and Texas? That’s not it, either.

The root of the problem is much deeper than anyone realizes — actually, it is a combination of small problems that has snowballed into one giant headache.

For starters, the track opened in 2000 and from that point  has never been resurfaced. The track’s frontstretch has a magnitude of bumps that many drivers in the Cup Series have compared to

holding on to a jackhammer for four hours. Some drivers have said that the speedway needs to repave the frontstretch while leaving the turns and backstretch alone.  While this would be a start, it isn’t the quick fix all.

Also, there’s the location. Kentucky Speedway isn’t in the best of locations as far as being a premier destination for NASCAR’s fans because of its proximity to Bristol Motor Speedway, Michigan International Speedway and Charlotte Motor Speedway. All three tracks are usually well attended by fans on Cup race weekends, especially during the summer months. One solution that would be viable for the speedway to thrive is to move its date either to early spring or the early fall; summertime in Kentucky is brutally hot, even at night. I remember when Kansas Speedway got its second race and being in the stands on a hot June day in 2011 while people were passing out from heat exhaustion. Kansas learned its lesson and the fans come in droves. Kentucky needs to take note.

Problem No. 3 is quality of racing. In my opinion, Kentucky Speedway provides the worst racing among the intermediate tracks in NASCAR. Take last weekend’s cup race for example — Brad Keselowski had built an almost three-second advantage over his Penske teammate Joey Logano in the early stages, and this was before the lap 30 competition caution. Did Keselowski have the best car? Yes, he did — there is no denying that. But it still doesn’t explain why after five laps cars are more spread out than what you see at a place like Michigan or Pocono.

The problem here is twofold. One is the aero package of the Gen-6 race cars. NASCAR gave teams more downforce prior to the 2014 season and the end result has been basically freight train-style racing with the leader checking out because of clean air. Two is Goodyear. Goodyear brings harder compound tires to the tracks each week to counteract the high speeds the cars reach on these fast 1.5- and two-mile ovals that also leads to an inability to pass because the tires don’t wear as quick. This is where the horsepower reduction that NASCAR plans on implementing in 2015 will pay dividends. Less horsepower and a softer compound tire that actually gives through a race run provides terrific racing, similar to what we saw at Darlington in the ’90s and early 2000s. You don’t need to go 200 mph to put on a good show, nor do you need 100,000 pounds of downforce — it just takes the right combination of aero, horsepower, tires and track surface to give fans a show they want to come back and see again. NASCAR has dropped the ball on that since they went away from the Car of Tomorrow.

Last but certainly not least, the fans remember what happened in 2011. I simply call it the biggest debacle I have seen in my 30 years of watching motorsports. It was the speedway’s first Cup race and instead of it being remembered for being a great race, it is best remembered for fans being stuck in traffic and missing part or all of the race simply because the track didn’t have adequate parking or there weren’t enough roads heading into the speedway. This is what is hurting Kentucky most of all; in fact, Kentucky only had around 60,000 fans at the track for last Saturday’s race. I hate to say it but the track lost its fan support on what potentially should have been its biggest night.

As for the future of Kentucky Speedway and the Sprint Cup Series, it isn’t good — in fact it looks very ominous. Considering that fans are clamoring for tracks like Iowa Speedway and Road America to get Cup dates as well as for Darlington to get its second date back, I believe Kentucky’s days are numbered

I dunno, I am against the huge amount of cookie cutters on the schedule as anyone. But Dale Sr, ahem..sorry Jr. complained, well that dang track needs fixin’ pronto! I dunno, it seems to me if it was a HMS car that dominated Saturday, the media would be talking about their excellence and dominance. God this business sucks hugely at times.

Yeah, I know of two members of this website that would be tickled silly if the 48 had won.

I can assure you that there isn’t a more cynical person in this would than me. Just ask my two ex-wives! But, I have to agree with kb. I think people were not so much unhappy with the race as they were with who won and what kind of car he drove. Two races in a row won by a Ford driver? Change the rules! If that race had of been dominated by a Chevrolet, and in particular, a Hendrick driver, the media would have proclaimed Saturday’s race as a classic.

Sorry! That should have read, “There isn’t a more cynical person in this “WORLD” than me.”

Whether the racing at Kentucky is good or bad is irrelevant. NASCAR is a combination of greed and politics. Who owns the track is the primary factor in all decisions, to suggest otherwise is just playing make pretend. Horsepower reduction is just another on a long list of NASCAR ignoring their fan base. Slow the cars down by taking away downforce and make aero a non factor. Fans could care less about slippery generic cars glued to the track. MOTOR is about the last interesting thing in NASCAR. Big nasty V8 motors Rrrrrrrrrr, ahh!

I don’t see where Kentucky stands out as a better or worse race with respect to the racing or the attendance than most of the other 1.5 tracks. I also agree with JohnQ that due to the fact that the owner of the tracks dictate where the races are run instead of what tracks create the best racing, I will be surprised to see Kentucky lose it’s race.

“One solution that would be viable for the speedway to thrive is to move its date either to early spring or the early fall; summertime in Kentucky is brutally hot, even at night.”

I promise you Darlington is hotter in early September, yet fans say they want the Southern 500 moved back to Labor Day.

Kentucky won’t lose its race anytime soon. Bruton Smith has too much of a ego to allow that. He bought the track and gave it a race to spite NASCAR, and then he couldn’t handle the crowd that showed up for the 1st race. It’s not like SMI hasn’t handled record crowds before.

The areo changes made a difference at first when they were running on older warn 1.5/2 milers (Vegas, California), but then they had tire issues at California and all the teams started complaining. Combine that with the schedule hitting the newly paved tracks (Kansas, Michigan, Pocono) and the intermediate racing is stinking again. They absolutely have to cut horsepower next year. Hopefully, that will mean softer tires, less downforce needed and better racing. When I’m at the track I can’t tell the difference in sound from Nationwide or Cup cars. They are all really loud.