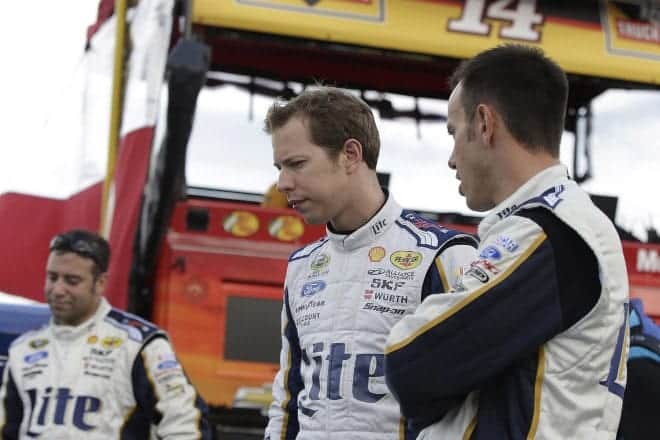 Well now, if you had never seen a good example of alliteration, this most certainly is a good place to start. Of the many wins Brad Keselowski has in his career, the headlines never quite had the same ring to them. I mean, “Keselowski Cuts Hand in … Phoenix”? No, this one was set up perfectly just for the writer’s own ears and the reader’s own pleasure.

It’s amazing how no one really cared about Keselowski’s win that much until blood was involved. Keselowski certainly isn’t the most hated driver in NASCAR and he certainly has a lot of fans. But let’s be honest, his win didn’t generate much buzz on social media until pictures of blood oozing from a cut on his hand from a broken champagne bottle began circulating on the Internet. And of course, Keselowski had one of his own to share.

No, I will not post it here because, ugh, EW, you guys, that’s gross!

One so-called “song” (it qualifies only as such for categorical purposes) that I hear on the radio every once in a while is “#Selfie” by The Chainsmokers. If you value your own sanity and brain cells, you won’t click that link, but I’ve had the experience of manically clawing at my own ears to just MAKE IT STOP! Yes, I know my radio station has buttons that I can push to either change the channel or turn it off completely, but that would require me having to listen for even just a brief moment. It’s like nails on chalkboard mixed with the sound of an alarm clock on Monday morning. Just … awful.

However, as I watched news stories and social media updates appear about Keselowski’s cut hand at Kentucky (there’s that alliteration again), I couldn’t help but reflect on this “song” for just a moment and borrow a line that reminded me of how the night played out.

“I cut my hand and it won’t stop bleeding! … But first, lemme take a #selfie!”

Ah, Brad K. All he needs is a Starbucks cup and some Uggs and he’ll officially qualify as a white girl.

“I keep seeing news reports about a driver who is being sued for fraud or something but I’ve never heard of the guy! Who is he??” Donald

His name is Brian Rose and you haven’t heard of him because he has done nothing of significance in recent NASCAR history and barely at all in his entire career. He has 41 NASCAR Camping World Truck Series start, with his most recent one coming at Iowa Speedway in 2010. His best finish was a third at Daytona back in 2002.

He did attempt to make one Sprint Cup Series start back in 2002, but failed to qualify. So, yeah, he hasn’t been around for a while and, when he was, you had no reason to notice him.

Rose is under fraud investigation for making up a coal mining company as his own to trick investors, and supposedly used some of the money made from this expenditure to fund his racing career. Of course this is all under investigation so “innocent until proven guilty” and all that, but it all sounds rather shady.

In fairness, the article I referenced referred to Rose as a “former” NASCAR driver, which would be a correct assessment. Honestly, though, attaching his NASCAR status to the headline makes it a better story. Otherwise, it would just be a local sidebar in the community. I would probably have done the same thing had I been the writer—that’s kind of your job—but it leaves a bad taste in NASCAR Nation’s mouth when someone who barely has anything to do with the sport is still tied to it enough that the name can be used as an attention-getter. And a negative one at that.

“I must really not understand sponsorships because the JGR thing is confusing me. Why does Home Depot want out of the sport and M&M’s might be leaving Kyle Busch, but Dollar General wants to expand their role? Wouldn’t ALL or NONE of them see the value in sponsoring a race team?” Ruben

Not necessarily. It depends on the company’s own economic status, financial standing, as well as their advertising and marketing goals. For instance, look at some of the recent commercials Lowe’s has put out featuring Jimmie Johnson (“BOOM, confetti!”) or the Subway commercials that feature Carl Edwards. These are examples of companies that see the value in attaching themselves to a driver and promoting the crap out of that relationship. But it also aligns with the corporation’s goals, whatever those are.

Home Depot used to have that kind of branding for their drivers. They had commercials with both Tony Stewart and Joey Logano when both were their drivers. They would have driver appearances at their stores and there would be references to the race teams at their various locations. Now, though, who knows what’s changed? Maybe they have decided it’s not worth the investment anymore or they see a more valuable opportunity they want to pursue.

As far as M&M’s, from the rumors that have circulated, it’s not the value in the sport they have questioned. It’s the value of the driver they are with as opposed to where the grass might be greener. As of now it’s just a rumor, but it doesn’t appear that brand will be leaving the sport for a while.

Of course sponsor relations are much more complicated than that. Sponsorships appear on cars for a variety of reasons, and they leave the sport for the same. I mean, yes, I guess you could simplistically break it down and say “They left because there was no value in the sport for them”, but then, like you said, it doesn’t make sense for another large company like Dollar General to expand. It’s not as simple as “the sport is a good investment for sponsors” or “the sport is not a good investment.” There are a variety of factors at play, some of them being the goals of the company, the cost of the race team, what they plan on doing with their sponsorship, and how they want it to be seen by the public.

This is an entire story for another time, so I’ll sum this up simply: For Home Depot, it didn’t make sense for them to stay in the sport. For whatever reason, NASCAR has been a valuable addition for them, so they expanded. The details might have more complexity, but that’s the gist of the situation for both companies.

“I’m a huuuuge Junior fan and I think he has a great chance of winning both Daytona races! I can’t imagine many drivers have done that though. I think I remember Johnson doing it recently (what hasn’t he done??) but I don’t know anyone else for certain. Can you fill me in??” Jesse

If Earnhardt were to sweep both Daytona races—and I agree with you, it wouldn’t be surprising to see it happen—he would join the elite company of five other drivers.

You are right about Jimmie Johnson sweeping both Daytona races. He did just that last season. The other four drivers are Fireball Roberts (1962), Cale Yarborough (1968), LeeRoy Yarborough (1969), and Bobby Allison (1982).

Though Earnhardt certainly has the speed this season to pull off a sweep (plus a history of restrictor plate prowess), these races are known as crapshoots for a reason. If I were to choose between Earnhardt and the field, I would still choose the field, but only because it’s too easy for one lone car to get caught up in a crash, no matter how strong he is or has been.

However, Earnhardt has just as good a chance as any to pull this off and those are some fantastic names to be placed alongside for the history of Daytona International Speedway. Being good enough is one thing, though. Pulling it off will be a different story.

I noticed in alot of blogs the comments on Brad cutting his hand were horrible. They likened him to a drunk, despite him just opening the bottle. They bring up his festive hard won Championship and him drinking his Miller’s. Man, people suck. Now if it was a chosen HMS darling these same people would have written a check to their drivers favorite charities because darling so and so cut himself and never a word about drinking. The guy did even get the bottle open. The negativity was and is staggering. Stuff happens.

I think I have it, the perfect analogy for the state of present day NASCAR. While reading this article it just came to me. Here goes. NASCAR is the elevator. Brian France, or one of his minions, is the one who farts in it. The NASCAR press are the passengers that ignore it. The remaining few fans are the ones that say “Oh yuck, really!” and seriously contemplate getting off at the next floor.

I might add one thing. The NASCAR press would tell the people in the elevator how stupid they are for not realizing that Brain Deads fart actually smells great.

Good to see more and more folks pointing out the nascar media. If they aren’t going to do their job, then they are just as responsible for the slow death of racing as nascar is.

JohnQ, you are so spot on. The media has a huge hand in the turnoff of fans of Nascar. Brian will continue on his merry way because the Emperor is not told he isn’t wearing any clothes. They have the media in print and on TV spewing the company line, you wonder how these people can sleep at night saying what they say and printing what they print. Until someone has the stones to call it continually like it is, nothing will change. Look at the Petty’s stating a fact about Ms. Patrick, they are still getting hung out to dry, very ugly stuff written because they spoke the truth. The truth is dangerous in this country today and God help you if you speak it.

The catch 22 is that it’s hard to blame the media because they are trying to keep their job. And in this economy I can totally understand that. With the cost of gas, food, health care, taxes going up and up, and the dollar shrinking…..It’s scary. We are left to mumbling to ourselves for fear of the PC police.

The case of Brian Rose is a little like what happened back in the late 70’s to the mid-90’s at Honda. Some Honda dealers were paying off Honda officials to get more cars and dealerships than they were entitled to. There was a certain NASCAR team owner in the thick of the corruption. Everything was Ok until an angry Honda dealer got screwed and blew the whistle on the corruption. Several Honda officials went to prison. This one Honda dealer/NASCAR team owner was nailed for mail fraud and sentenced to prison. But, he had a plan! He ran to his doctor and got the doctor to “diagnose” him with Leukemia. The courts had sympathy and only sentenced this team owner to one year house arrest. Talk about a scam! So, all Mr. Rose has to do is find a doctor to “Diagnose” him with Leukemia, or some other critical disease. Hey, it worked for Rick Hendrick!

Your point is very good. However what you didn’t mention is that there were several others in Nascar, including at least one other team owner and at least one prominent crew chief who were sweating the proverbial bullets that they would be exposed as well. But no need to speak ill of the dead.