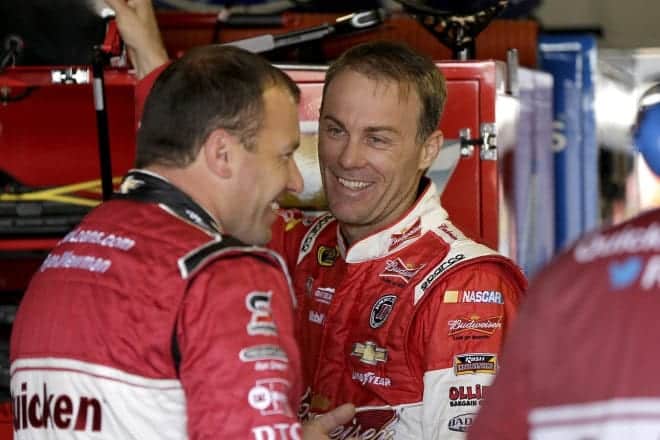 The Sprint Cuppers head to Daytona for the third of four restrictor plate races Saturday night. And the one thing about these races, as you may well know, is that you don’t know with any certainty what is going to happen. Sure there are some guys who have a knack for this kind of racing, going 200 mph with other cars only inches away, lap after lap after lap. There are some who prefer to stay up front and avoid the almost certain “Big One” wreck. There are others who prefer to ride around in the back and make a late charge. And the thing is, both ways can lead to a victory.

One of the big questions here will be if Dale Earnhardt, Jr. can repeat his Daytona 500 magic and win this one. Or will Tony Stewart finally end up in Victory Lane this season, since this Daytona race is just 400 miles and not 500? Can Danica Patrick contend in an effort to win her first Sprint Cup race (don’t laugh, it could happen)?

Those are just a few of the questions to ponder as we hit the mid-season point as this Daytona event marks the 18th race of the season, meaning there are just eight more left before the Chase for the Championship begins.

It’s difficult not to choose Dale Earnhardt, Jr. at a restrictor plate track. His win at Daytona in February gave him what appears to be a nice confidence boost and even though he does have two wins this year, he could very well end up with three or four. In his last five races at Daytona, Junior has four top-10 results, including that win, and his worst finish is 15th. Who knows? He may very well stay up all night and tweet again if wins at Daytona twice in the same year.

OK, Matt Kenseth fans, it’s time to start getting worried. After his five-victory season last year, it’s hard to believe Kenseth is without a win this year. Sure, Kenseth is secure in the points standings if there are less than 16 winners before the Chase starts, but I’m sure he and his team would like a little insurance here. Kenseth does have one win and two other top-10 finishes in the last five races at Daytona. What’s also impressive is that he has led 226 laps in those races, so it wouldn’t be a surprise to see him up front for a lot of this race.

As is almost the weekly ritual, you can’t forget about Jimmie Johnson at plate tracks either. Johnson has won two of the last five races at Daytona and was in the top 5 in a third one. Plus, he has led 126 laps in those races. A caveat, though, is that his average finish of 17th has been tarnished by two DNFs, so keep in mind he’s not always lucky at Daytona, even if he is almost always good.

I’m going to go on a bit of gut feeling with the final pick of this punch. It’s true Kevin Harvick does not have a win in his last five races at Daytona and it’s true that he has not even led a lap in those races. But Harvick is one of those guys who may well ride around in the back for much of the race, then with 20 laps to go be contending for the win. He does have two career wins at Daytona among his 11 top-10 finishes in 26 races. It could be happy night for Harvick and his fans Saturday.

One driver who is desperate for a win certainly is Tony Stewart. He has jumped in and out of the top 16 points this season, and he is certainly no sure thing to make the Chase and that’s something he can’t be happy about. Stewart has performed well in this race in the past, with one win in the last five overall Daytona races, and all four of his career points race victories at Daytona have come in the July race there. So, Stewart knows he can win this race, and he’s got history on his side too. This just might be the night he breaks through.

A driver who may have had a breakthrough on restrictor plate tracks this year is Denny Hamlin. He had a good Speedweeks heading up to the Daytona 500, but that didn’t go so well. But Hamlin did come back and win at Talladega, so maybe he’s getting this plate thing figured out. Hamlin has not won a points race at Daytona, but he has been in the top 10 in two of the last five races there, including a second-place finish. He has also led 126 laps in those races, so this might be a good week to give Hamlin a shot.

A driver who has been good on plate tracks lately, too, is Ryan Newman. He does have a Daytona 500 victory under his belt, and in the last five races at the 2.5-mile oval he has finished in the top 10 three times. Newman also doesn’t have a win this year, but is having a solid season, sitting eighth in the points standings.

Another driver who is capable on the plate tracks is Greg Biffle, who, like Stewart and Newman, hasn’t visited Victory Lane this year. Biffle does have three top-10 finishes in his last five trips to Daytona and does have a win in the Daytona July race. Biffle’s average finish is 11.0 in the last five races at Daytona, which is good for third best among active drivers, and he has led 87 laps in those races.

At least this week there is some variety to pick from. I was sure that Kyle Larson was going to do well last Saturday night in Kentucky, so he went out and ended up with a 40th-place finish. Awesome. But such is life in the fantasy sports world.

So, first let’s look at the two rookie regulars in this spot in Larson and Austin Dillon. Larson finished 38th in the Daytona 500, but we all know that’s not indicative of the kind of driver he his. However, getting the hang of racing in plate races can take a couple of years, so hard to say how Larson will do Saturday.

Dillon started on the pole at the 500 and he does have a little more experience in the plate tracks in Cup cars having finished ninth and 31st at Daytona. And since he’s a hang around until the end type of guy, sometimes that’s not a bad guy to pick in these plate races.

Also, this week, you have to make Danica Patrick a legitimate option here. She has proven she can race with the boys on these tracks, and if you’re on pick limits, and are looking for other drivers to fill spots when you don’t want to use Larson or Dillon, then Patrick is a realistic option here. She did finish eighth in the Daytona 500 last year and also has another top-20 finish to her credit in her four races there.

Then, too, let’s not forget about Trevor Bayne here. He has of course, won the Daytona 500, but has not had much recent luck at Daytona lately, with his best finish being 20th in the last five races. Still, he’s a threat and worth a shot if you are on pick limits and saving later starts for Dillon and Larson.

The top of the standings on the Frontstretch league on Yahoo! remained the same this week with LeftTurnOnly still in a comfortable lead with 4,690. Next are NoBarNASCAR with 4,570, Mojothemonkey with 4,492, Shadows PT with 4,406 and Ace Racin’ with 4,383. The top move of the week was BradKBlue226 jumping up 12 spots to move into 21st. The top weekly performance went to BradKBlue226 for the second straight week with 367 points with race winner Brad Keselowski, second place Kyle Busch, ninth place Joey Logano and 16th place Austin Dillon.