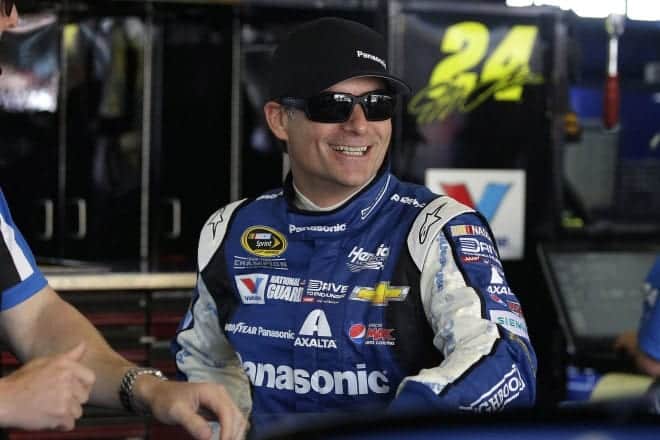 Ahhh.  It’s time for a pause.  One of those moments of reflection or something like that.  People who practice yoga might consider it a time to get centered.  Those who are taking a different path to enlightenment might feel it’s time to grab a beer and change the channel.  Duly noted.

One of the things that has confounded Happiness Is in recent weeks are the frequent comments about how the media covering NASCAR is just a shill for the product.  That we’re all complicit in pushing forth some kind of NASCAR agenda and that everyone is ignoring the problems-at-large.

Dammit — you found us out!  I will now sip from my NASCAR mug, drinking my NASCAR kool-aid, while on a boat sponsored by NASCAR, while waiting for my NASCAR track-girl, complete in Sprint attire, to deliver my steak and lobster.

At this point, it seems like all of the problems have been hacked enough that it’s difficult to find a new angle with which to attack.

No matter.  The goal here isn’t to continually rail on the aspects of NASCAR, and all of auto racing for that matter, that seemingly disappoint on a frequent basis.  Fish in a barrel.

Nope, this is a place to find a bit of merriment to accompany the fact that we all sit around wasting parts of our lives watching drivers try to make vehicles go fast.

Happiness Is…Vacation.  This column frequently assails the way that many of the schedules are developed for the major touring series.  It’s an easy target.  For a change, however, it’s good to note something about the schedule.  And what might that be?  That the Truck Series has the weekend off.

The reason it’s a good thing is that this is the second stop at Daytona, which means pack racing and lots and lots of torn up rides.  With the series struggling to put together full fields, there’s no reason that the few that are out there need to be destroying their equipment.  The cost-to-worth ratio for the series is brutal and in many ways, they shouldn’t be racing at Daytona or Talladega in the first place.  At least keeping it to a minimum helps out a little.

Of course, the argument could be made that if you can’t afford to race, then don’t race.  That’s what the teams have been doing but it’s also up to those in the corner offices to make decisions that encourage the existence of the series rather than driving it into the ground.  Maybe this season will be one of the proverbial wake-up calls.

Happiness Is… Making Friends.  So Gene Haas gained acceptance into the exclusive world of Formula 1 and is supposed to, at some point, put two cars on the grid.  The prospect of making the 2015 season failed to come to fruition and now the belief is that they’ll be ready to go for 2016.  In the meantime, Haas CNC Automation has signed on to become one of Ferrari’s sponsors.

The move obviously aligns Haas to have some of the famed pony’s underpinnings if/when they actually do make the grid.  It is also a move that develops what were likely nonexistent ties to the sport while bringing the Haas name into the paddock.

It’s easy to ask: why Ferrari, with how lackluster they’ve run this year? But they are still one of the most recognized brands in the world and the publicity is worth more than the performance at this moment.

Happiness Is… Triangle.  Do you know how difficult it is to come up with a synonym for triangle?  Go to the thesaurus and most of the entries have to do with love-triangles and the like.  Sure, there are descriptors, like obtuse or isosceles, but there isn’t much in the way of another word.  It’s kind of like trying to rhyme the word orange.

Frustrations aside in trying to be creative, it should be noted that IndyCar will be visiting Pocono this weekend, racing on Sunday.  Last year the series returned to the track after dropping it in 1989 and put on a good show.  Scott Dixon used the race win to catapult himself into the championship, which he ultimately won. Is Pocono actually becoming a likeable track?  That seems like a crazy thought.

Happiness Is… FF.  Presumably Mercedes will qualify near or at the front for the Silverstone Grand Prix this weekend.  It’s likely they’ll then take on the race lead and then scurry away with a win and the battle for the championship will remain between Lewis Hamilton and Nico Rosberg.  The fans of F1 have got to be frustrated by this frequent sequence for their races.  But hey, for those of us recording the race, that’s why the fast forward button was invented.

Happiness Is… Luck.  OK, this is one of the two remaining races that can act as a wild card and allow a driver to secure a spot in the Chase.  A little bit of luck and a car that still has its fenders, and anyone has a shot with three laps to go.  That’s one of the selling points, and it favors the underdog ethos of Americans — but we also build big companies and cater to them and it’s more probably that someone from one of the major teams again takes the trophy.  But there’s always hope.

Happiness Is… Love.  This country is the world’s amalgamation filled with amazingly contrasting views, personalities, beliefs and general likes and dislikes. That’s not news but it is something that should be remembered from time to time, which makes this week one of the more interesting ones.

That’s what makes the country’s fascination with the U.S. Men’s Soccer Team fascinating.  That more people tuned in to watch the team play, on a Thursday afternoon, than did the NBA Finals indicates that people can both find some togetherness in a sport that is ignored much of the time and that the love for the country is resolute.  While sports are often a dog-and-pony show that distracts people from larger issues at hand, it is also, at its best, a unifying force that can bring catharsis and enjoyment.

Now about that loss to Belgium.

Well, nice article except when you dismiss (much like Nascar) valid points from a fans perspective. Nothing like telling your readership in a wink-wink kinda way that we don’t know what we are talking about and that we have our windows taped with aluminum foil and are always on the lookout for those black helicopters.

Now I get it, the fans are leaving in droves because the present day NASCAR product just gets better every day. We are really not bored senseless by the Cup Vanity Parade in CWTS and NW, which is why the stands are filled to capacity. Manipulation cautions, GENeric 6 cars so aero dependent that there is more passing in the track parking lot than the track, don’t exist. Before you blame the fans for your lazy coverage try reading some of the baseball and football writers. They praise the good, criticize the bad, and don’t leave readers wondering if they are paid by MLB or the NFL. Finally, yoga, centering, WTF!

Is it just me or has the tone of this website shifted since the new website was launched? I’m not suggesting that I want to read only negative articles about NASCAR but I believe that I, like many fans realize that NASCAR is in serious trouble. Believe me when I say We, as fans would like to see NASCAR survive. What is troubling is that while fans seem to fully recognize this fact the media seems to spend it’s time writing articles that ignore what is really going on. Instead it seems many of the articles are written to put a positive spin on the current state of NASCAR. As NASCAR is burning itself down to the ground the media is content on telling us that its just a tad warm, (or is that just the humidity?)

I am will all the posters, it seems the typical media atmoshpere these days is to report “it’s all good” and if you dare tell the Emperor and his minions the truth, well its you just being mean. We love Nascar despite what is going on but it is a sad state of affairs when it seems all the writers do is put out fluff pieces for HMS and a occasional bone to the rest. The Nascar script dictated by BZF has never been better, The Chase, Dale Sr/Jr HMS Bill/Chase Elliot, the return of the number 3 and Danica are the best thing that ever happened to it. There isn’t any favoritism, all cautions are legit..etc. Yeah, happy day Nascar..your right its perfect..(sarcasm)