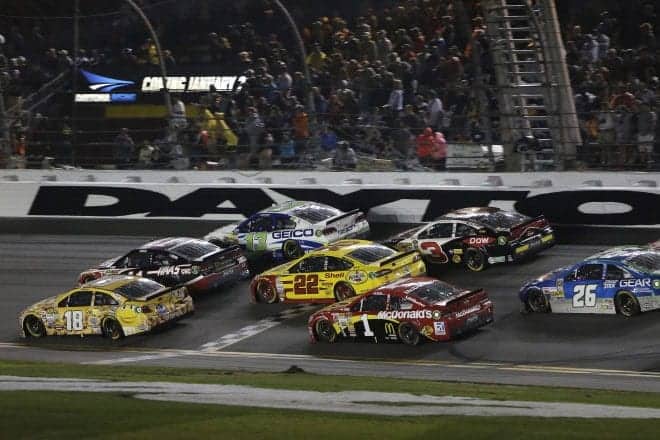 The Daytona Night race. It is the jewel of NASCAR’s summer stretch. The race formerly known as the Firecracker 400 has been a staple of the NASCAR schedule for over three decades, and over time this race has grown to be one of the biggest and most prestigious races on the schedule.

Admittedly, the past few weeks of NASCAR action have been tepid, to say the least. The 2014 season has been a great one overall, but the TNT stretch of races has been a bit…dry, yeah, dry, that’s a good word for it. All of that is set to change tonight, as 43 cars will do battle under the lights in a 160 lap superspeedway draft-war of epic proportions, and the driver who can best manage the tough-to-handle Gen-6 restrictor plate aero package and outfox 42 other fiercesome opponents will be the one to take home a much-coveted Daytona win. Who might that driver be, and how will his race unfold? I answer that and much more in this patriotic-themed edition of Four Burning Questions.

1. Will tonight’s race match the excitement of recent plate races?

As long time fans of this sport know, superspeedway/restrictor-plate racing is the most fluid and ever-changing discipline of racing that the Cup Series engages in. One year, the superspeedway races will be single-file affairs with little to no passing. Then the next year, the racing will completely change, and the races will be epic two/three wide pass-happy draft battles that are emblematic of the finest racing this sport has to offer. There are a myriad of very intricate factors that determine which style of racing you will see.

With this current aero package, you can expect the latter, and not the former. Superspeedway racing has returned to its place of former glory in NASCAR (based on the past three plate races) courtesy of some small changes to the cars by NASCAR as well as continued education of the package by the teams. This year’s Daytona 500, which is undoubtedly the most comparable race to what we will see tonight, was about as good of a race as one could ask for on Daytona’s smooth and admittedly character-less pavement. The current package, with its tiny spoiler and lack of downforce, rewards drivers who can out-handle their opponents on Daytona’s narrow track-surface as well as out-draft/out-think their opponents using cunning superspeedway-racing tactics. Not since the mid-2000s have we seen an aero package that truly rewards skillful superspeedway racers while putting on a good show to boot, but we definitely have one now.

As to what this all means for tonight, expect to see lots of two and three wide racing and a high number of lead changes much like the race in February. However, even with as crazy as it is expected to be, the cream will undoubtedly still rise to the top, because Daytona has morphed back into a handling track after all.

2. Will an underdog steal a Chase spot?

I’ll make this one as concise as possible. Not. Gonna. Happen. Period. Folks, please understand something about Daytona International Speedway: it is not, has not, and never will be a “crapshoot track.” The whole notion that when the series comes to Daytona Dave Blaney and Morgan Shepherd suddenly become contenders for the win is pure and utter bogus. There was only one restrictor plate package in recent memory that was a true “crapshoot”: the tandem racing package of 2011, and thankfully that package was quickly eliminated. Underdogs fare much better at Talladega, and to call that place a “crapshoot track” would still be a fallacy for reasons that would take too long to explain in one column. Yes, I know David Ragan is technically an underdog who has won two plate races, but he won those races because he is a damn good superspeedway racer, not because he was some lucky underdog who “stole” a win due to chance.

So please, spare me the worries of Joe Nemechek somehow getting a magical lucky push and taking a Chase spot. Daytona is a handling track and has always been a handling track, and that is ESPECIALLY true with this current aero package. And that makes this track very difficult, as not only will the drivers have to fight ill-handling cars in the draft in the Florida heat, they will also have to deal with all of the challenges of pack racing on top of that. That means the very best drivers in the sport will be the ones duking this thing out tonight.

There’s a reason why the very best driver in this sport (Jimmie Johnson) swept the two races at Daytona last year: it is a difficult race and a difficult track that rewards the best in this sport. You can thus expect to see one of the best win this thing tonight.

3. Could tires become a factor?

Tires have not been a factor in restrictor plate races for a very long time. Talladega was repaved in 2006, and Daytona was repaved in 2011, and during that time, tires slowly ceased to be important at either track once the newly smooth pavement was put down on each. Now, however, tires may very well becoming important once again.

Of course, let’s get one thing straight here: tires will in no way, shape, or form be as important as they were on the old Daytona surface. It’s going to take years, maybe decades, before that kind of tire wear is seen at Daytona again. That being said, I still think tires could be a factor tonight.

If you go back and listen to some of the audio from the Daytona 500, you can hear many a driver complaining about their car’s handling, grip, and stability, and the complaints grew worse as the run went on. Dale Earnhardt, Jr. even said after the race that handling was a big factor. Whenever handling is a factor, tires/tire wear proportionally become important factors. Given how hot it is supposed to be this weekend, I think it is reasonable to predict that the track will be slick enough to make drivers desire the extra stability provided by two or four tires on pit stops instead of taking no tires like they often have done in new-surface plate races since 2006.

As such, I would keep an eye out for tire strategy late in the race. It could potentially win or lose the race for somebody.

Daytona has been a Hendrick-dominated track since 2013. Jimmie Johnson swept the two Daytona races in 2013 and his teammate Dale Earnhardt, Jr. won at this facility in convincing fashion earlier this year in February. Overall, the Hendrick cars, followed very closely by the Gibbs cars (Denny Hamlin won the Sprint Unlimited and the Talladega spring race this year), seem to have the best handle on this current aero package.

With that in mind, I think the winner of tonight’s race is going to emerge from one of those two camps. Not a very sexy pick, I know, but I think it is most accurate. As for which driver I specifically think will take the win, I am going with Matt Kenseth. Kenseth has been a beast on plate tracks since pack racing returned in 2012, and has led a whopping 507 laps on plate tracks in that timeframe, which is three hundred more than any other driver. I think he will clinch his Chase spot and win the race tonight.

As for a dark horse pick, I would keep a close eye on Ricky Stenhouse, Jr. Stenhouse has had limited success in the Cup Series thus far, but he does seem to have a knack for the Cup Series’ brand of plate racing. Stenhouse has the second best average finish of any driver (behind Dale Earnhardt Jr.) on plate tracks since 2012 and nearly won the fall Talladega event last year. Do not be surprised if he wins tonight.

Obviously you love plate races, some of us are not so fond of the demolition derby crapshoots.