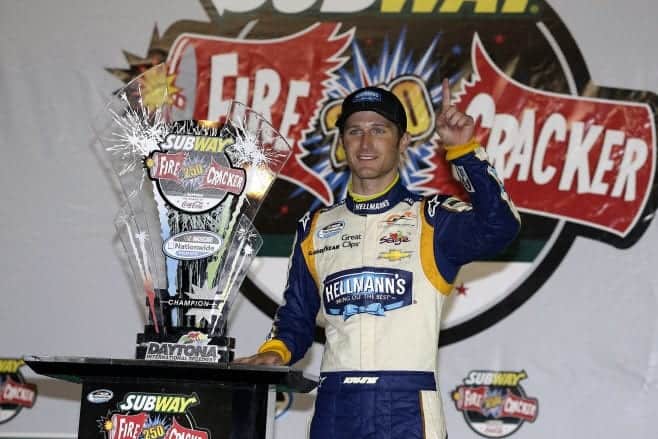 Regan Smith looked like he was going to do it again at Daytona International Speedway, but Friday night belonged to another JR Motorsports machine. Kasey Kahne, for the first time since 2007, returned to victory lane in the Nationwide Series and did so for the first time at Daytona.

Kahne beat Smith to the line by 0.020 seconds, the third closest finish in Daytona history. He came charging through the field after two late cautions and was pushed to the finish by Ryan Seig, who captured his career-best finish by coming home third. Rookie Ryan Reed and Kyle Larson rounded out the top 5.

The 100-lap event was a typical restrictor plate race. The 40 car field found themselves going back and forth between single file racing and then bunched together two-by-two for a fantastic photo finish at the end. Just the same way it had done in February when Smith was the victorious side.

And it was over in a blink. After waiting an extra 90 minutes to get started because of weather, the race went just 1 hour and 38 minutes long with the first caution not flying until lap 53 because of debris. From there, two late cautions for accidents on Lap 94 and Lap 99 sent the race into overtime.

We already knew that JR Motorsport is good, but how good continues to be proven. By winning at Daytona they did something that many probably don’t know – they remained undefeated on a Friday night. Kasey Kahne made it a second straight win for the No. 5 after Kevin Harvick won last Friday in Kentucky.

In an ironic twist from February when JR Motorsports team owner Dale Earnhardt, Jr. caused a wreck after the checkered flag and collected Ryan Reed, the rookie came back on Friday night and was again in the middle of a JR Motorsports sandwich. Only this time, he made it out in one piece and collected his career best finish of fourth. In doing so, Reed qualified for the “Dash for Cash” program.

Even the best of drivers make mistakes. Numerous drivers making mistakes in a short amount of time is uncharacteristic, though. Penalties ran rampant earlier on and ruined the night for most of the drivers. Joey Logano was busted for speeding on pit road, but came back to finish seventh.

Josh Wise and Landon Cassill (finished 30th)were both penalized for pushing before insult was added to injury for Wise. He was then penalized after serving his penalty for not adhering to the blend rule of keeping the left side tires below the yellow line until the exit of Turn 2; he finished 32nd. Joe Nemechek was also nabbed for an uncontrolled rear tire. Nemechek finished 27th.

On the other hand, a driver who has had many things go right for him lately finally had something go wrong. After a victory in Road America and a sixth-place finish last weekend in Kentucky, Brendan Gaughan got tagged on Lap 94 by Darrell Wallace, Jr. and crashed in the tri-oval. It was the end of his night as he finished 28th.

Wrecking at restrictor plate racing is expecting, but wrecking in restrictor plate qualifying, because of a sudden downpour, is beyond a rare occurrence. However, that’s just what happened on Friday afternoon.

As the first round of knockout qualifying was winding down, rain started behind the racetrack at the Daytona airport. As a group of cars then headed down the backstretch it was as if the sky opened up and the rain poured down. Suddenly it went from dry to drenched and several teams suffered.

Even worse, it was the teams who couldn’t afford to lose a car. Ross Chastain needed a backup car, as did Scott Lagasse, Robert Richardson and Mike Bliss, who had to use his teammate Blake Koch’s car. All drivers involved made it into the race but their days didn’t get much better after that.

The only way things could have been better for Ryan Sieg on Friday night would have been if he won the race. But a career best third-place finish, high praise from Sprint Cup Series driver Dale Earnhardt, Jr., and qualifying for the Nationwide “Dash for Cash” program probably came pretty close.

Seig, in his underfunded No. 39 for the family team, has been turning heads this year, and Friday he quietly charged to the front to do so again. As the field formed two-by-two in a frantic finish, Sieg continued to climb, eventually getting behind Kasey Kahne and pushing him to the win coming off Turn 4.

0 of 40 cars decided to start and park

Consider it typical Daytona. Drivers logged laps in the beginning, leaving many to wait for the excitement to unfold and then the chaos ensuing at the end. JR Motorsports undeniably continues to prove they are the organization to beat this year.

Another win for the company, that’s six on the year and second consecutive, and Regan Smith took back the point lead. Now halfway through, the championship fight is looking like it’s going through their shop. And more so, they sweep the season at Daytona and do so in another photo finish.

New Hampshire comes next, which is bound to be loaded with Cup drivers and won’t lack the same excitement that Friday night did. But it does come with a little added bonus for some Nationwide Series teams who qualified for the “Dash for Cash” program.

Regan Smith, Ryan Sieg, Ryan Reed and Jeremy Clements will also battle for an extra $100,000 next weekend, which might make the race inside the race, more exciting than who winds up in victory lane.

Another Cup win in a second tier series, yawn. Glad I didn’t waste my time watching. More glad that no one died. Plate racing bunches up cars at 200mph while killing the acceleration needed to possibly avoid an accident. Every time a plate race ends without serious injury I consider it a victory for all NASCAR fans. It took the fatality of a popular driver to finally force the installation of the safer barriers. I hope it doesn’t take a multiple fatality accident resulting from the beloved “big one” before alternatives to plates are seriously considered.

There was a race Friday night? I thought that was Sprint Cup practice session.

A Hendrick Hero won. Therefore it was an event legendary in the annals of the World Center of Racing.

The picture clearly shows that Kahne’s # 5 was being shoved not only by Sieg’s 39, but also by the 22 and Bubba Wallace in the 20. They all should have been penalized, the same as Landon Cassill and Josh Wise.

What about the UNDERFUNDED team of Jeremy Clements Racing and their 8th place finish.. Are you kidding? Boy there is certainly favoritism in this sport.