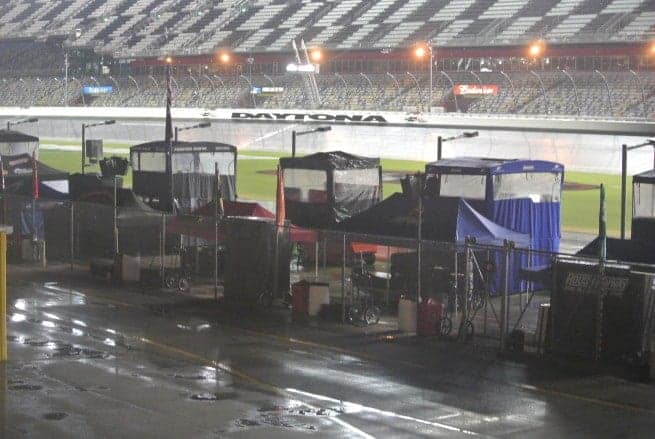 This weekend’s activities at Daytona bordered on the biblical, with Mother Nature more concerned about flooding instead of full-fledged NASCAR competition. Final Cup practice was rained out, the Nationwide race was delayed and the Cup race was postponed to Sunday. That caused an extensive amount of on-air time with nothing but the Air Titan, a bunch of bored drivers and talking analysts as the main choices to show live, at the track for both FOX Sports 1 and TNT.

Not exactly the best possible options, right? As a result, during the practice time and the Cup delay, the network chose to show a replay of the earlier practice and the previous year’s race to keep fans entertained, figuring simple nostalgia could keep them hanging around until the actual green flag flew hours later. While that is the convenient option, in terms of manpower in reality it doesn’t do anything to grow the fan base of the sport. My idea? Showing alternative race programming. With the right types of exciting action, replayed to a new audience television just might be able to interest some more fans into following the developing drivers in the sport.

Let me explain. In March of this year, NASCAR announced a new initiative to bring more grassroots racing to the masses by introducing Fans Choice TV. The service broadcasts races from NASCAR-sanctioned tracks, AMA and IMSA events. The drivers competing there typically develop into the future stars of the Truck Series, the Nationwide Series and, ultimately, the Cup Series. With the lagging attendance and viewership for Truck and Nationwide events, exposing potential fans to up-and-coming talent in the sport would be a great way to boost those numbers.

These events are also fairly short. As an example, a 100-lap race from Southern National Motorsports Park will take 60-90 minutes to complete. Compare that, then to the two to three hours in rain delay coverage normally invested by television before they’ll defer the viewers to other programming. So rather than subjecting the viewers to a repeat of some on-track action that they’ve seen before or, worse yet, the pathetic attempts of people who aren’t funny trying to be funny, why not showcase the sport’s future talent?

Imagine having the opportunity to watch Keith Rocco and Ryan Preece battling it out in a Whelen Modified Tour race somewhere in the Northeast. Rocco is a national champion from NASCAR’s Whelen All-American Series and Preece is the Whelen Modified Tour defending titlist. Preece has taken a couple of opportunities to run in some other touring series of NASCAR, including at New Hampshire this weekend in Nationwide and could potentially move up to the national level soon. Northeastern fans of the Cup series, who don’t go to their local tracks, just might find a reason to head out to Thompson International Speedway in CT if they like the Modified racing they see.

The same is true for a Whelen All-American Series race from Southern National Motorsports Park. Fans might see two-time and defending national champion Lee Pulliam battling it out with Matt Bowling, this year’s winner of the Denny Hamlin Short Track Showdown. Pulliam is attempting to become the first three-time consecutive winner of the national title while also running some races in the K&N East Series. Imagine if the fans were able to see Bowling or Pulliam two years from now in the Truck Series? They just might jump on the bandwagon, following both careers because they were made aware of them through a rain delay broadcast of the Cup race.

These Fans Choice programs are certainly not compiled with the same high quality production and video quality that a national touring series race is, but that isn’t the point. NASCAR has a serious need to bring more eyes to the sport, especially younger viewers (despite ISC’s trumpeting, last week that TV viewership in the 18-24 age group is up six percent). Put simply, if a child sees a driver running at a track within a short drive of their home during a rain delay, they may ask their parents to take them to the facility to watch a race. If the family goes and has a good time, realizing how affordable local racing is, they might go more often. Before long, the local track has a larger fan base, and the up-and-coming drivers in the sport have fans following them that they never would have had before.

The television broadcasts and the overall health of the sport should be a collaborative effort between the broadcast partners and the sanctioning body. NASCAR is trying to build their products and can only do that if more people watch. Fans Choice TV is not only a product, but it is a vessel that can put the future household names of the sport front and center — that is, if the networks will work with NASCAR to make that happen.

Clint Bowyer is a funny guy, and people enjoy listening to him during the rain delays. Unfortunately, Clint can’t be on the mic for two hours. As a result, there are some personalities that aren’t quite as humorous being interviewed. There are studio analysts trying to come up with different ways to say the same thing that they’ve said three other times during the show because there is only so much you can talk about while it is raining at a race track. It would be better to show actual racing, even if it was something the fans had not been exposed to before. Networks do know that, to a certain degree but was the 2013 Daytona 500 (which some people got confused was the actual 2014 race) enough to keep people hanging around? The ratings say no.

No one wants to see rain at a racetrack, but until they come up with giant domes at a reasonable price, weather is going to impact racing. When it does, the people putting on the races and the minds bringing those races into the living rooms of the world have a choice of what they send to the television screens. It would benefit everyone involved if they would take the time to dig through the archives a little bit and bring some races to the airwaves that most people had not seen before, choosing fresh content instead of reruns. It might be a bold move, but NASCAR was built by taking risks. In the end, a rain shower just might cultivate a new race fan.

It might have been more fitting to show a replay of the 1984 Firecracker 400.

I thought the exact same thing the other day. For as much talk there was about the 30th anniversary, it would have been very appropriate and also enlightening to the younger fans. And besides, I’m not sure anyone could confuse it with this year’s race. Maybe there was some type of rights agreement to re-broadcast it.

Anyone sitting through a rain delay already knows what kinds of racing they like, and what they do not. I suspect that many do as I do, DVR hours of it and FF until the race is on. The DVR could possibly slow the drifting away of fans. Without it I would have just skipped this weekend’s race.

I really like the idea of showing other racing series. Years ago, when Speed Channel was all about live or reasonably delayed showings of cars on track wherever wnd whenever, I saw a kid named Lewis Hamilton win some kind of Mercedes kart race in thrilling fashion. Years later when he popped up in F1, I felt like an insider. I knew this guy could race. But then again I like all kinds of motorsport, even those yucky series without Jimmie, Jeff or Joonyer, so I’m probably an anomaly.

Hey, where are the rest of the week’s racing TV time? I’m only seeing Tuesday here. Am I missing something?

I always rely on the list here to know what to watch when,,,,