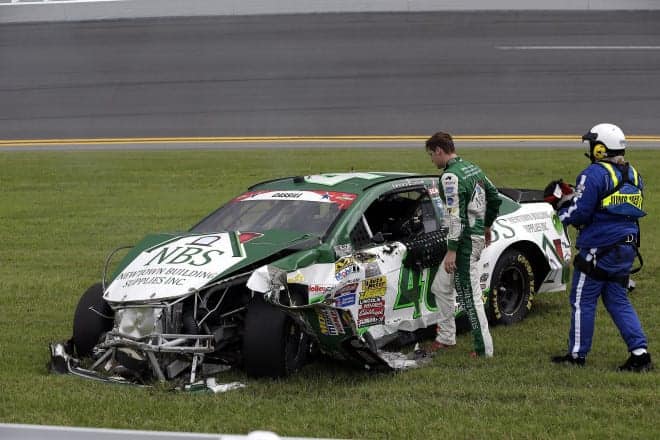 Landon Cassill has had an up-and-down career in NASCAR’s top three National Series. Seven years ago, Cassill was an 18-year-old prodigy in Hendrick Motorsports’ driver development program. In 2007, he started six then-Busch Series races for Hendrick Motorsports in either their Nos. 5 or 24 Chevrolets, sponsored by the National Guard. The results showed a green driver without a lot of experience, someone who was learning on the job.

However, Hendrick Motorsports gave Cassill more seat time, fielding cars for him in 16 races. Cassill responded with a pole at New Hampshire and five top-10 finishes, including a pair of sixths at Gateway and Phoenix (November). Cassill also had three additional races in Jay Robinson Racing’s No. 4, earning a best finish of 14th at the Circuit Gilles Villeneuve. Then, the economy went in the toilet, bringing driver development to a virtual halt. Cassill went from having a semi-regular ride in a top-notch car in Nationwide to making one start in NASCAR for all of 2009 (a tenth-place finish, earned at Memphis Motorsports Park in Phoenix Racing’s No. 1).

That one appearance started a relationship that saw Cassill drive the team’s start-and-park No. 09 in the Sprint Cup Series in 2010. Cassill’s work ethic then got him hired to drive for TRG Motorsports, Gunselman Motorsports and Germain Racing, again, mostly in Start-and-Park situations. However, Phoenix Racing decided to race full distances full-time starting in 2011 thanks to sponsorship from Security Benefit. After Bill Elliott drove the first four races of the year, Cassill got the call. The young driver struggled at times, but posted a best finish of 12th at Michigan, raising eyebrows while going toe-to-toe with the best this sport has to offer.

Since then, Cassill’s had a full-time foothold in Sprint Cup. 2012 saw him drive full-time for BK Racing in their No. 83 Toyota. Unfortunately, that season ended with Cassill suing the team for lack of payment on his contract.

2013 saw Cassill split time between Circle Sport and Hillman Racing in Sprint Cup, while also driving two-thirds of the season for Johnny Davis in the Nationwide Series, posting impressive results after Danny Efland was released. 2014 is more of the same, with Cassill driving Johnny Davis’ No. 01 full-time in the Nationwide Series for points, while also wheeling the No. 40 for Hillman Racing full-time in Cup.

Prior to the Nationwide Series drivers’ meeting in Daytona, Phil Allaway sat down with the double-duty competitor to talk about his season to date.

Phil Allaway, Frontstretch.com: So far, you’re tenth in points in Nationwide with three top-10s, including two eighths. How would you describe your season up to this point?

Landon Cassill: It’s been extremely successful. We’ve made a lot of progress at JD Motorsports and seen a lot of growth. We’re reaping the benefits. We just gotta keep working hard and keep progressing. We’ve got some things in the pipeline that we’re doing with our cars to make them better.

Allaway: You drive for one of the lesser-funded operations in the series. When you finished tenth at Iowa, they waited until halfway through the race to buy the full tire allotment for the event. Can you describe what it’s like to drive for a smaller operation, and the kind of sacrifices that you would have to make?

Cassill: It’s just different. You’re just [competing] differently than some of the other teams. I, honestly, wouldn’t want it any other way. I’m enjoying the way that we’re growing as a team and working our way up. Eventually, you reach a point where you learn how things really are and how you have to make the best out of the situations. You realize that we just do things differently. We have to, because we don’t have the money to spend that the other teams do.

Allaway: How would you characterize the Nationwide Series as a whole right now? We have a nice 45-car entry for Daytona, but that’s not always the case.

Cassill: I think the Nationwide Series is a great series. I’ve enjoyed racing in it; it’s helped me a lot in the [Sprint] Cup Series. I think that there are a lot of really competitive teams and I think that the group of small, independent teams is growing, which is good for the series. As long as we’re putting in full fields, we’re going to keep putting on good shows.

Allaway: This season, you have Jeffrey Earnhardt as your teammate.  You’ve been working with him for the whole season.  How is it having Jeffrey as a teammate?

Cassill: It’s good. He’s a nice kid. I think he’s learned a lot and he’s come a long ways. He just wants to race. I’m pretty supportive of that.

Allaway: Talk about how the banning of tandem drafting has affected Daytona and Talladega in the Nationwide Series?

Cassill: Yeah, I liked tandem drafting, but I know that it caused a lot of crashes. It was tough on a lot of people and it sounded like the fans wanted it changed. So, we’ll do what they want.

Allaway: Should there be more separation from the Sprint Cup Series on the Nationwide schedule?

Cassill: Maybe not so much on the schedule, but I wouldn’t mind seeing the Sprint Cup drivers not allowed to race in Nationwide.

Allaway: Not at all? None of this “they’re not racing for points” stuff?

Allaway: What is the relationship between Hillman Racing and Circle Sport? Is it a merged operation, an alliance? How does it work?

Allaway: Do Hillman Racing and Circle Sport work together at the track? Do they act like a two-car team?

Allaway: With Circle Sport, they’ve had four different drivers so far this season. What can you take from your quasi-teammates, this week being Bobby Labonte?

Cassill: I don’t know. I get along with Stremme pretty well. He and I communicate together really well. We talk about the cars and stuff. It’s a good relationship.

Allaway: [Hillman Racing] is 33rd in owners’ points this year, which is quite a bit better than they’ve been in the past. Had some good runs, most notably the 11th at Talladega and the 12th in the Daytona 500. How would you describe your season in the No. 40?

Cassill: It’s been great. It’s definitely been up and down, but we’ve made a lot of progress on certain things. The last few weeks, we’ve struggled with our car, but we have a clear idea of how we’re going to get it in the direction we want to go. I’m looking forward to it.

Allaway: Seems like you’ve gotten caught up in other people’s issues.

Cassill: Yeah, that’s just racing in general, though. I try not to use those as excuses, but at the end of the day, we have to focus on ourselves and continue to make our team better.

Allaway: You’ve had a number of different sponsors this year. This week, it’s Newtown Building Supply. How’s the sponsorship front looking for the No. 40?

Cassill: It’s actually looking pretty good. I think we only have six [open] races left for the rest of the season that are unsold. We’re pretty happy with our sales department this season.

Later that afternoon, Cassill mentioned in a press conference that he and the team were trying to convince Gallery Furniture, a Houston-based furniture store chain that served as the primary sponsor on the No. 40 in the Duck Commander 500 at Texas Motor Speedway, to re-up for the AAA Texas 500 in November.

Allaway: Back in Daytona, you and Hillman Racing announced an 18-race deal with Nabi Tablets. They’ve only done one or two races so far. Are they the bulk of the remaining races?

Allaway: Does it have to do with Sprint?

Allaway: Outside of racing, what do you like to do in your spare time?

Cassill: Right now, my wife and I are renovating our house. That’s been a pretty time-consuming process.

Allaway: A couple of rooms, or the whole thing?

Cassill: The whole house. I also work out a lot to stay in shape for my racing. I’m doing a lot of races, so I got to stay in good shape.

Allaway: What are your thoughts on social media in NASCAR?

Cassill: I think it’s extremely valuable. It’s just another avenue that we can [use to] reach our fans on a more personal level. I’ve created relationships with fans through Twitter and things like that.

Allaway: I remember that you took a bunch of fans mini-golfing the day of the Daytona 500 a couple of years ago.

Cassill: Yeah. Things like that are very valuable. Fans will never forget that.

Cassill ended up having a great time in qualifying, timing in third-quickest in the abbreviated Sprint Cup qualifying session, then 25th in the Nationwide session. Unfortunately, the Nationwide race was not so good for Cassill. Cassill lost the draft early on and in an attempt to catch up, got in a draft with Josh Wise. NASCAR deemed the draft, caught on camera by ESPN, to be tandem drafting. As a result, both drivers were given pass-through penalties. It should be noted that the “no tandem” drafting rule was not mentioned during the Nationwide drivers’ meeting, which this interview immediately preceded.

The penalty put Cassill two laps down, and he was unable to get either of them back, eventually finishing 30th. Cassill dropped one spot to 11th in the standings as a result.

The rain-delayed Coke Zero 400 went a lot better. Cassill was strong for much of the day, leading five laps and putting himself in contention for another good restrictor plate finish. Unfortunately, being towards the front put him in position to get swept up in the big wreck on Lap 97. Afterwards, Cassill simply stated that “…there was nothing I could do at that point” in reference to the crash.

The No. 40 was retired almost immediately after the wreck. However, the fact that the rains came shortly afterwards somewhat limited Cassill’s losses. He walked out of Daytona with an unsatisfactory 31st-place finish and constant thoughts about what could have been.

That still makes me mad that Cassill got penalized because he was getting pushed, what was he supposed to do, he cant just stop him from drafting him. Nascar needs to make up there mind on these rules

There hasn’t been a consistent set of rules since 1948, why start now?