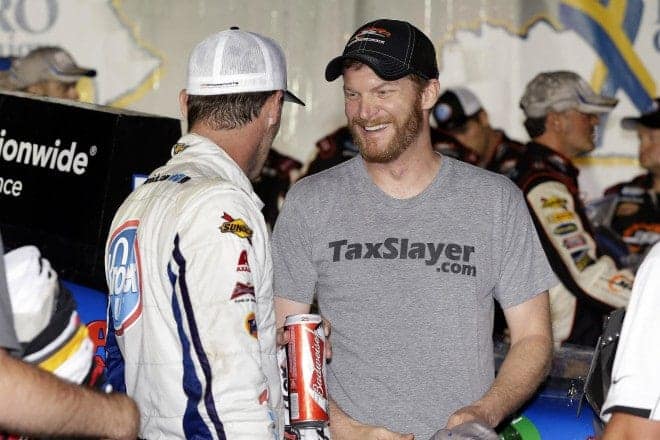 Many a NASCAR fan has been sent into a blinding rage when their promised NASCAR race was pre-empted by, oh, literally anything else. Say the race is on ESPN, during a given week, but the network is airing a football game that runs long and into the time slot NASCAR is scheduled for. Suddenly, the Twitter-sphere is flooded with comments like “See? ESPN doesn’t care about NASCAR” or “Stupid football, no one is watching this game anyway, it’s a blowout!” Even if it’s just the pre-race show fans are missing, it’s just awful, you guys, NASCAR is dying because of it!!

That’s coming from the same people who would throw a fit if the race did get moved to another channel or went off completely because the race was a blowout and something more important was coming on afterwards. Yes, I know, this “nightmare” did actually happen once a few years ago. Once. NASCAR has gone over its scheduled time slot countless times, before and after that, but it’s that one time that everyone will be quick to remind me of. Yes, I know, I remember. But that’s beside the point. The point is that NASCAR fans expect the networks to adhere to them, and only them, or face the horrific wrath of their mighty keyboards.

Well, imagine the streak of rage that eventually became strangled annoyance as I watched people (non-NASCAR fans) get butt-hurt on Sunday afternoon when the rain-delayed race dared to pre-empt the long awaited and eagerly anticipated airing of …. Lord of the Rings?

Oh, you didn’t hear? Yes, Lord of the Rings fans took to social media when they turned to TNT to watch the movies that were supposed to air and were enraged because the NASCAR race was on instead. I mean, TNT lied to them, how could they do that?? How will they ever know if Frodo Baggins succeeded in his quest, if the Dark Lord Sauron will ever be destroyed, or if Gandalf is really just Santa Claus’ less jolly half-brother?

Oh, I don’t know… rent the movies? Buy them for a few bucks at Wal-Mart and you can watch them whenever you want? Was this Sunday the last time Lord of the Rings would ever be aired on network television? What’s the deal??

Now, don’t get me wrong. I’m not making fun of anyone for liking Lord of the Rings. God knows that if anything ever pre-empted The Walking Dead, I’d probably weep loudly and openly until it came on. But, gosh, why is it that we expect everyone to cater to our likes and our needs? Television has a responsibility to finish what it started, and if TNT said they were going to air the NASCAR race, they freaking need to do it. They can air movies that are now over a decade old any other weekend afternoon. Or, you know, the people who wanted to see it sooo badly can literally buy the movie anywhere else and watch it that way.

Not that I need to tell you guys. However, the same basic concept still applies. Television can only please so many people.

Howdy Summer. I have another question that came to mind. Each team has a TON of uniforms (drivers, crew members, and in the case of DeLana Harvick, sometimes even the driver’s wife) that they have to have cleaned each week. Do the teams send those uniforms to the dry cleaners, or do they wash them in-house? Tim

Typically, teams will either send the uniforms to a dry cleaners or they have an agreement in place with a company like Cintas where the company deals with the cleaning and maintaining of the team’s uniforms and whatnot. It’s not necessarily a glamorous job, of course, but, you’re right, it’s one that needs to be done. And I don’t think a typical run through the washing machine would get the job done, nor would you want to deal with the firesuits shrinking.

In fact, you’d be hard-pressed to find a crew member from a high-profile team without a spic and span firesuit on. At least, at the beginning of the race… afterwards is a different story…

“How does this new Race Team Alliance work? Do they share sponsors? Information? I don’t understand what the point is. Help me understand.” Rachelle

I don’t know all the basics, and RTA still appears to be a work in progress in terms of how it’s going to work. But the gist is that it’s an alliance designed to save costs and, basically, make more money. No one will deny or argue that racing has gotten more expensive; it’s getting harder to find sponsors and keep up with growing costs. This partnership is, in a way then, supposed to help protect the teams, finding better ways to be successful in this sport while becoming more efficient at spending money in the process. The RTA have said that they eventually plan on opening membership up to other teams.

This alliance isn’t quite the same thing as teammates, though. Hendrick Motorsports and Joe Gibbs Racing will still be competitors, will remain so and won’t share information that they think will be of a particular advantage on the racetrack. But in terms of revenue and cost-cutting measures for the betterment of the sport? I would imagine that is where collaboration comes into play.

Since this agreement is still a work-in-progress, I would imagine the day-to-day works of such an alliance are still in the “rough draft” stages. As of now, though, the formation of the RTA is intended for one purpose: money.

“Well, it appears that all you media types who were predicting we could have more than 16 winners were wrong yet again! 11 winners and only eight races left until the Chase. I don’t think we’re going to have a different winner each week until then, do you? Seems like this whole Chase thing was over-hyped once again.” Sherry

Even though it is mathematically possible for there to still be 16 winners this season, I agree that isn’t going to happen. I think there will be one or two more first-time winners this season and after that, we’ll see more of the same from drivers like Jimmie Johnson and Kevin Harvick. I don’t recall ever predicting myself there would be 16 winners. I thought the concept itself was far-fetched, though I also agreed that this new system would have certainly set up the possibility.

That said, I still don’t think anyone over-hyped the Chase format. Though my opinion is subjective, the racing has been fantastic this year. You never hear drivers get out of the car and say they had a good points day, and many teams admit to changing their strategy based on the new points system. How is anything about that over-hyped? That’s exactly what many in the media, myself included, believed would happen.

I know that some people will refuse to like the new system because it’s not the old one and I think it’s just easier for some people to be angry. But that doesn’t mean anyone who holds a different opinion than you is wrong. I’ve enjoyed this system very much and think the new format is long overdue. The only thing I want to see happen now is for NASCAR to leave it alone for a while, because changing the points system every few years might possibly be a bad reflection on the state of the sport when we look back on this time in the future. Otherwise, the fine-tuning to get to this point may have well been worth it.

Sadly, Lord of the Rings probably has a larger fan base than Nascar. Except to the France family and their Court, which includes the media, the problems with NASCAR grow more troubling almost every week. I suspect that the RTA may be an attempt to wrest control of the organization from the France family before irreversible damage is done. Imagine NASCAR functioning more like an actual sanctioning body than Wheeled Wrestling. One can only hope.

The LOTR trilogy has been on televison a gazillion times, I think. And it always ends the same. My guess is that most of the folks watching it have seen it before, probably multiple times. These folks need a life. They should be FORCED to watch Nascar. But not soccer.

LOL. Most LOTR fans have the dvd, the director’s cut dvd, the director’s cut bluray, and whatever other iterations they’ve been released.
I’ll believe the RTA is anything but a loose business association when I see it. It could be the best thing that ever happened to the sport if they have any power.
Yes! We finally agree on something. Changing the points “might possibly be a bad reflection on the state of the sport”. You just need to get rid of the word “might”.

For a business to survive it must make…..money. (GASP!!!) This is trying to survive while under the rule of King Brian the Brainless. Before he turns it into Detroit.

Brian would make a good Gollum. :)

It will be next to impossible for the RTA to get control of the sport when Nascar and ISC are owned by the same people and Bruton is making to much money to play around to much. It might give the teams a bigger voice and help stop some of the costly decisions though.

Can I say what I think? Did anyone see the joke of a qualifying session for Daytona? Did anyone see a garage full of junk because of the Nascar leadership? The lapdog media is pussyfooting around this attempted coup. Let the owners tighten the screws and lead racing into a better direction. It’s about time.