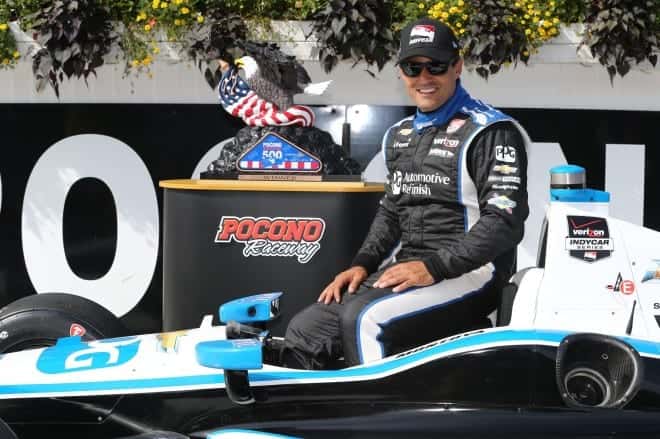 Last September when Juan Pablo Montoya made the official announcement regarding his return to the Verizon IndyCar Series, many questioned whether he could return to prominence.  A driver who has shown a great deal of versatility in his racing career turns 39 this September, an age that is often over the hill in the open wheel ranks.  Nevertheless, team owner Roger Penske had faith in his ability and Montoya’s confidence showed with continued steady improvement.

On a somewhat strange weekend where Montoya’s past NASCAR pals could barely get to a checkered flag after mother nature and lots of wrecked equipment interrupted, it all came together during the Pocono IndyCar 500 weekend with flawless weather and only one yellow flag resulting in his first pole and win in the series since 2000.

Even though this came together in less than a year, with this result Montoya can soon be considered a contender for the championship if things continue to go his way.  With all that said, Montoya still feels like some work will need to be done to have a legitimate shot.

“It’s been a long road,” said Montoya.  “It’s a lot harder than people realize because as I said the other day, driving open wheels is so different than what I’ve been driving the last few years, and it’s just ‑‑ it was going to take time.  I don’t like jinxing it and saying, oh, it’s coming, it’s coming.  I’d rather be let’s just keep working on it.  I feel at this point we’ve got to step it up and work a little bit harder because I think we’re in a position now to win the championship.  So we’ve really got to step it up.”

It has been evident how much he respects and looks up to a car owner like “The Captain” Roger Penske since day one of joining the organization, and his excitement showed throughout the entire weekend if not before.  A relationship like that is what fuels success on the track.

“I think Roger is the man,” said Montoya.  “I mean, it’s unbelievable everything he does.  He’s head and shoulders above anybody else.  That’s why everybody wants to be like him.  He’s an example to anybody, and for me to be honest with you ‑‑ I’m not saying this because I run for him.”

Even Helio Castroneves was beyond thrilled to see his fellow teammate celebrating after 500 miles.

“Congrats to Montoya. Are you kidding me? This guy is unbelievable. Coming back after 15 years and winning a race? He did a great job. As soon as they signed him I knew he would be an asset, and a headache, for us. It’s good (to have a) 1-2 finish”

While the major story leading into the weekend was Pocono Raceway’s less than stellar ticket sales compared to its first year, there was a promising crowd celebrating after the race had concluded no matter whether the turnout was more or less than expected.  A contingent of fans cheering and chanting while displaying the Colombian flag was an exciting sight to see, and is something that the tracks and series need to focus on more especially coming off an event at Houston where that country swept the podium in one of the races.   Increasing attendance by promoting to the markets relating to the diverse backgrounds made up from the driver population is a must.

Montoya hopes that with the general geography of Pocono Raceway that the series can return for many years to come.

“It’s exciting.  It’s a cool place because it’s so close to New York and there’s so many Latinos there, New Jersey and all that area.  I mean, I think the crowd was really good.”

Whether he makes it back to victory lane this season or not, with the victory at Pocono it is certain that the first season back for Montoya can be considered a success.