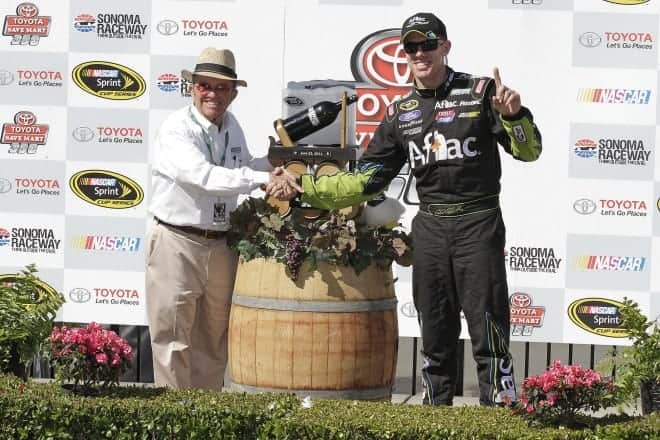 Carl Edwards and Jack Roush have enjoyed a decade's worht of success together. Edward's move to Joe Gibbs Racing for 2015 comes at a time where their outsourced engines have been largely left in the dust this season.(Credit: CIA)

The biggest news this week was the announcement of the RTA – Race Team Alliance – within NASCAR’s premier Sprint Cup Series. It’s a business alliance vociferously downplayed and described as a not-a-union, one that seeks to “work together to increase revenue, spend more efficiently, and deliver more value to our partners” as declared in their press release on Monday.

Isn’t that exactly what Unions do?

Either way, even more peculiar was NASCAR’s nonchalant response to the announcement.

“We are aware of the alliance concept the team owners have announced, but have very few specifics on its structure or purpose,” they said in a statement. “It is apparently still in development and we’re still learning about the details, so it would be inappropriate to comment right now. NASCAR’s mission, as it has always been, is to create a fair playing field where anyone can come and compete. Our job is to support and strengthen all of the teams, large and small, across all of our series and we’ll continue to do that. NASCAR is a unique community with hundreds of stakeholders. They all have a voice and always will.”

So what does all of this non-threatening, inoffensive language mean?

First, I feel it is a very public vote of non-confidence in Brian France. Would such a formation have happened in the days of the Benevolent Dictator Bill France, Jr. or Big Bill France? Big Bill sent NASCAR’s biggest star packing – Curtis Turner – for attempting to form a union. He sent the regulars home at Talladega after climbing in a car himself, in 1969 and recruiting lower division drivers to fill the field in an odd mix of Camaros, Mustangs, and the full-size coupes of the day. Those sorts of issues were minor flare-ups, while Bill Jr. steered the ship through an era of stratospheric growth that didn’t slow down for 40 years.

The company line has always been, “NASCAR’s smarter than us, look at how far we’ve come, and nobody ever thought we’d reach levels this high.” That sentiment has soured severely over the past six years.

You can explain away a lot of what happened during NASCAR’s downturn – the 2008 recession and the collapse of the auto industry. But what of the Car of Tomorrow? Sure, it was a step in the right direction of safety, but what resulted was a poor racing product early on, and a downright hideous car that bore absolutely no resemblance to a stock car at all; it even made the cockeyed Twisted-Sister Gen-4 cars look svelte and symmetrical by comparison. This mistake, coupled with a comically bad marketing campaign, Cup’s Most Popular Driver toiling in obscurity for nearly four years, and the same guy dominating the sport in a way that has never been dominated for FIVE straight years, something should have been done to change direction – but wasn’t.

So here we are, in 2014, and what’s the end result? Acres of empty grandstands, once fanatical support weakening to that of the common Iraqi conscript, and ratings lower than Donald Sterling, Congress, and the President combined, conspired to nearly sink the once-thought-unsinkable vessel that was NASCAR.

It was only until recently that the Gen-6 car came out, as well as tweaks to The Chase (which still has yet to improve upon its original 2004 iteration), and qualifying has perception started to turn the corner. But it was the Gen-6 car that saw the manufacturers working together like never before to help design and develop identifiable machines to stock cars, for a series that bills itself as Stock Car Racing.

So what of NASCAR’s tepid response?

Well, what do you expect them to say? The current financial model has been unsustainable for several years now, and the owners banding together, while unfortunate for a few reasons, was inevitable. The principles involved aren’t new money interest in the sport – although their mouthpiece Rob Kauffman, investor with Michael Waltrip Racing, is. Roger Penske, Jack Roush, Rick Hendrick, and Richard Childress didn’t build empires that collectively are worth billions of dollars by accident, and each has helped shape motorsports in multiple divisions, as well as the way business within the sport has been conducted for over 30 years.

From sweeping car changes, to delays installing SAFER Barriers at all of the odd and obtuse angles at the faster tracks, and now proposed engine changes, it is the teams that have been bearing the brunt of some of the bad business decisions made over the last decade, and this organization looks to stem that tide from rocking the boat again. So why all the grave concern? Let’s just say a similar arrangement was attempted in what the CART Series (IndyCar) did in the mid-to-late 1990s, a factor in the IRL split and the results were disastrous. The resulting CHAMP Car Series did not fare much better in the early-to-mid 2000s, which has many fearing the worst of what power struggle might result.

While the CART comparisons are inevitable, what gives me pause at first from fearing imminent demise is that those involved are our sport. They were part of the that transition period from NASCAR being a little underground success story, to the glory days of the 1990s, to the struggles we face while at unprecedented levels today. All are also successful businessmen in ventures outside of racing. Penske and Ganassi were also present during the CART/IRL debacle, meaning they’re unlikely to repeat that same episode again. Open-wheel racing has yet to recover from that split in this country, and may not ever fully regain the status and prestige it once held.

Besides, you can’t spell CART without RTA.

Where teams are most likely to realize some benefit, in the short-term will be if they push to gain a share in revenue from the television contracts, additional funding to help shore up the sponsorship slide that has happened in recent years. While the monetary situation has improved, we’re not anywhere near the blank-checkbook days of the 1990s and 2000s, simply because the costs have escalated so high. Mass layoffs in 2008, as well as the demise of many teams due to lack of sponsorship has cost many a driver his ride, and many a crew member his job.

While teams are still restricted to a four-car maximum, there are several that are able to only field two cars full-time. If teams are able to gain more in the way of funding, it would help bridge the absent sponsorship money if they have a handful of partial-season sponsors, or keep a team running the first part of the season if sponsorship has not yet been secured. The increased funding Richard Petty Motorsports was able to gain from Smithfield this season has helped aid in additional testing and R&D, which in part culminated in the first win for the No. 43 in 15 years – and first win at Daytona in 30 years – this past Sunday with Aric Almirola earning his first Sprint Cup Series win.

So what does all of this posturing mean in the interim? Not much really, since nothing has really happened, and there is really no specific agenda to speak to. When it will likely produce action is when the plans for the 2015 engine package are unveiled and if the cost is deemed unacceptable to the owners, as well as when we get closer to the next year’s new television contract with FOX and NBC. Perhaps the mere presence of an aligned group of owners and teams – NASCAR’s NATO – will put enough pre-emptive pressure on the NASCAR Pact to endure that both sides never really come to blows, in a sort of mutually assured destruction (MAD) that kept uneasy peace during the Cold War.

As with this current tenuous agreement, it’s a fine line. If things do escalate, everyone loses – particularly the fans.

BOWLES: A Deeper Look Inside The RTA…

Great column. I suppose the RTA members got to the point where they figured they had nothing to lose. There is a Russian proverb, No one ever found a dead cat in a tree. RTA members have decided that if they continue to sit in the tree they will die a slow death. If they jump they may die anyway, but they at least have a chance to survive the fall. Nascar’s problem is that they can’t even figure out that they are IN a tree let alone that being there is a problem.

One has to wonder. Certainly this is about money and power, not a better deal on the blue plate special down at the dinner. But, while its easy to say that its about the TV money, the time for addressing that was before the contract was signed. And it could have been done quietly with a conference call among all the parties.
I think it is deeper than that, more fundamental, yet not about the racing. Most interesting is that its not inclusive of all owners. Secondly despite Nascar’s claimthe fact that BZF’s state of the sport speech and the RTA were done separately only days apart says otherwise.
Interesting times.

I love that the threat of conflict is there, if it means it will keep King Brian and his two minions honest. I just hope it doesn’t blow the house down.

It’s a shame that this even has to be, but Nascar has only itself to blame. Greedy, pushy dictatorship only last so long.

I hope the RTA will help the owners police themselves in terms of costs. I don’t think NASCAR rules dictate that a team has to spend $20-30 million a year per car to be competitive. It happens because one team starts spending a bit more, then another team spends a bit more, etc. Maybe they should agree outside of NASCAR to abide by a spending cap? I think sponsors still find value in NASCAR and motorsports, just not at the outrageous prices that were being paid before the recession. Yet the big owners still try to operate on those budgets.

For the mistakes NASCAR has made recently, the attendance and ratings problems are impacting all the other sports to different degrees, even the Green Bay Packers couldn’t sell out a playoff game last year. Sometimes us NASCAR fans live too much in the “bubble”.

good information in this column. I hope that the RTA can rein in the idiocy of the current management of NASCAR. BZF took a thriving sport and ran it into the ground as far as fan interest. He seems really good at making $ for the France family but not all that interested in keeping the sport viable.

I wonder if the RTA can put pressure on Nascar to stop sucking up sponsor dollars as “…official whatever of Nascar”? That might help teams find sponsor $$.

Attendance is down, so the TV deals are definitely Nascar’s money maker. And apparently if 65% is true, the tracks are fairly happy I’d think!