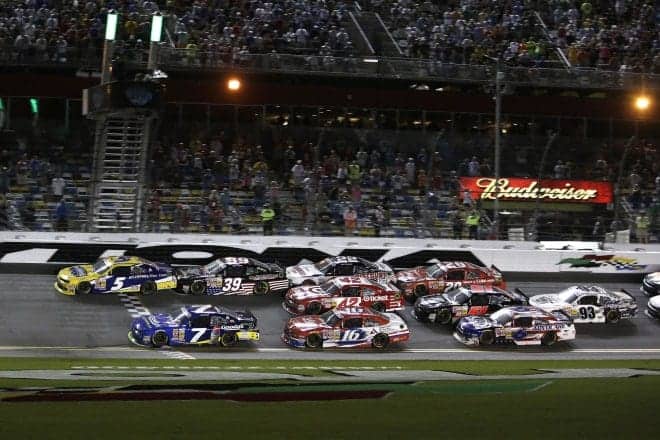 The JR Motorsport juggernaut rolls on in 2014, with its latest stop having been the Daytona International Speedway. The team left with another win, making it No. 6 on the season, as well as a 1-2 finish with Kasey Kahne and Regan Smith, and regained the driver point lead with Smith.

The further the season goes on and the more the company continues to distance itself from its Nationwide Series competition, it doesn’t leave a whole lot to talk about or even to wonder what’s next. It became quite apparent a long time ago that the sky is the limit, and the team is successfully shooting for it.

So, at this point, a championship is the only thing they will find acceptable — and fans should, too.

“Most certainly,” Dale Earnhardt, Jr. told me in Daytona in regards to if anything less than the championship would be disappointing for the organization. “We have two great opportunities, we definitely seem to be a strong enough team and we think we can get better in a lot of areas with our cars and improve our speed. We think that there’s some areas that both the 9 [Chase Elliott] and the 7 [Regan Smith] can improve individually.”

That has to be nothing more than a team owner not wanting to get complacent, because Smith and Elliott have blown many’s expectations away and, currently, look untouchable.

Since NASCAR’s implementation of the pick-a-series rule that banned Sprint Cup drivers from winning the Nationwide championship, regulars have done their best to show their worth. Austin Dillon had the consistency but not the wins last year, which bothered many. Ricky Stenhouse, Jr., on the other hand, tore through the series in 2011 and 2012 with eight combined wins — with the bonus of tormenting Cup drivers on a weekly basis.

JR Motorsports has seemingly, and easily, done the same — and on that merit alone, should be the title favorite.

If you or I had a dollar for every time “deserving Nationwide Series champion” was thrown about, well, you get the idea. But Smith and rookie goldmine Chase Elliott are not just a part of the conversation every weekend — they are the conversation because they’re always there, leading laps, knocking down solid finishes or winning.

Elliott Sadler is trying to break up the party, but let’s not fool ourselves; his presence isn’t as felt as the others. And statistically for all those number lovers, the JR Motorsports cars again have that covered and it’s not even close to the competition. Take out a misfortune here or there, the point gap could very well be over 100 to the field.

But I digress. Though it goes with the point that if fans want a deserving champion and if success against Sprint Cup drivers dictates that, then fans must be rooting for the Earnhardt-led company and, just like them, will feel a great sense of disappointment should November come and they are left empty-handed.

This isn’t just some fluke, either. It’s been a long hard road for JR Motorsports to even get to the point where they are the class of the series. It doesn’t seem long ago when there was continuous head scratching at how far they had fallen after the departure of Brad Keselowski.

From nearly winning the championship in 2008 and 2009 to a rotating door of drivers in the seat of the No. 88, going through the Danica experience, and eventually a family breakup with the Eurys, all of it was part of the road to get to 2014 — and two full-time drivers in Smith and Elliott who are challenging for a title.

Then to add in drivers like Kahne and Kevin Harvick, who have now won races in the third car, all the Monday morning beer toasts should have, by now, given everyone a permanent buzz in Mooresville. Yet it’s fantastic to follow along with. In turn the atmosphere at the shop has changed dramatically over the years; the people brought in have been the right fit and certainly came with a boatload of experience.

They do after all have a former championship-winning engineer from Jimmie Johnson’s Sprint Cup team in Greg Ives. Then came Ernie Cope and new resources and line of communication from Hendrick Motorsports. All of that combined is as extraordinary as NASA and hard for the competition to match.

“I don’t think we’ve seen the best of either one of those teams this year and hopefully they can realize their potential,” Earnhardt continued. “If they do that there shouldn’t be any reason why one shouldn’t win the championship between the two of them. That would be just a dream come true to have them two guys come down and battle it out together.”

It’s a dream that could become a reality in four months time in South Florida, and thus far, JR Motorsports in Florida is undefeated – winning in February, winning in July.

In the meantime, Earnhardt. admits he’s just enjoying the ride because all of this was once never thought to be possible.

Except we have all been witnesses to an incredible run that is only halfway done, leaving a fascination in not only seeing how far it can go but also ending with the only result that will make the 2014 Nationwide Series satisfactory for many.

well, if you want to be honest in your reporting. JRM is a farm team for HMS. While they had their “struggle” one could argue it has never been money but about talent in their cars. As for the Eury’s leaving, it just shows THAT MONEY is what it is all about, talent and blood be darned. Junior gets way to much credit for his company, the name as always is by design, always maxing out the brand name. Not saying he doesn’t work at it or for it, but as usual there are many, many, many behide the scenes, nary a mention. But don’t dare speak of Rick having ownership..ssshhhh..it’s all Jr’s money and idea. So the spin of Jr.’s little company that could, you know like the real little guys that could but can’t because they don’t have the peso’s, is funny.

Well if you want to be really, really honest in your reporting you will admit that no one cares about the NW Championship. Any “Champion” that at best runs 6th behind the Cup Vanity Parade is a farce. NW isn’t even racing anymore. It is just an extra Cup practice session.

All that really matters is that it’s not Kyle Busch. Right?

Any of the top-6 could be champion, pointswise, though the ones on the bottom, 5th and 6th place are long shots. Chase Elliot and Ty Dillon are rookies, so I don’t think they can do it, but I think they’re the prime Rookie of the Year Candidates. The 6th place driver’s within striking distance of the top-4 and if Chase had a bad race, would be close to top-3 with a good New Hampshire run, as long as he was enough ahead of Ty Dillon and Brian Scott, in addition to being ahead of Chase. Trevor (6th place driver) HAS had good results at Loudon.

I was only considering points and rookie or not. The points criteria used is the ones within 72 points of the lead, more than 48 up to 72 as long shots. This is a very simplified view, as there may be other factors that come into play. Like health or equipment issues.