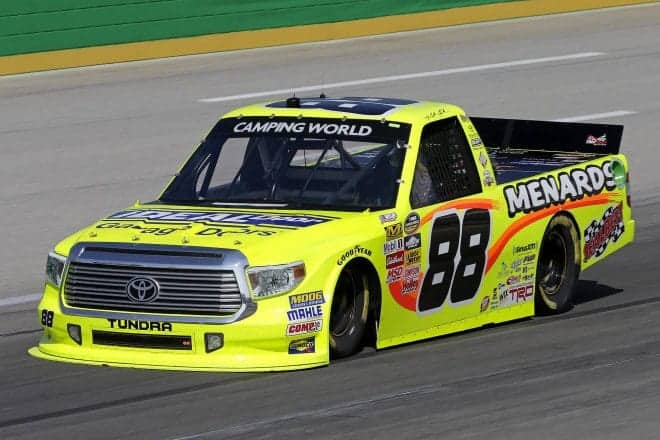 While the Nationwide and Sprint Cup Series drivers head off to New Hampshire, the Camping World Truck Series is headed to Iowa Speedway for a rare race alongside IndyCar. Thanks to that distance, there isn’t a single Cup driver on the entry list for Friday night’s event, and even better, a full field of trucks (38 for 36 spots) is expected at press time. That makes this weekend, with Kyle Busch back East the perfect time for some of the Truck Series stars to shine. With so much young talent in the sport right now, there’s a wide variety of faces you could see in Victory Lane, with five in particular in position to put a major trophy on the shelf.

First, you can’t count out Timothy Peters. The driver of the No. 17 Red Horse Racing Toyota has won twice at the 0.875-mile oval, both in the July visit the last two years. And while he has only finished inside the top 10 one other time, it’s hard to bet against the guy who hasn’t finished outside the top 15 this season, except his lone DNF after getting involved in a crash at Texas Motor Speedway last month. In fact, Peters’ last two finishes in 2014 have been third and fourth, and he’s just knocking on the door for another trip to Victory Lane. Besides, Peters would love nothing more than to add another win to his resume and take home a good chunk of points since he’s sitting third, just 11 markers back from the leader.

“I love going to Iowa; we were able to win the July race there last year and our goal is to go back and do that again,” Peters said in a team release. “It’s a fun track to visit, the trophy sure is cool and the fans are great.”

Of course, if I’m going to mention Peters, it’s worth pointing out his teammate, German Quiroga. Quiroga has yet to visit Victory Lane in the Truck Series, even though he’s been showing he’s ready for that first career win. With six top 10s in eight races so far this season and only one finish outside the top 15 (engine failure at Texas), it’s easy to see why Quiroga’s name would be on this list. Add in that Iowa is the location of his first career pole last July, paired with a solid sixth-place finish last fall, and it’s not that far off to expect he could come out on top Friday night.

“Iowa (Speedway) will always be a special track for me since it’s the place I captured my first pole award,” Quiroga said. “Maybe we can go back this weekend and make it the home of my first NASCAR Camping World Truck Series win.”

Then, there’s defending champion Matt Crafton, who already has two wins this season (Martinsville and Texas) and is the only driver to have visited Victory Lane that doesn’t drive for Kyle Busch Motorsports. The driver of the No. 88 Menard’s Toyota is no stranger to the winner’s circle at Iowa, either, having won in 2011, and he’s got an impressive fifth-place average finish with seven top-10 results in seven starts. Striving to become the first back-to-back championship winner in the Truck Series, Crafton could use a solid run at Iowa this weekend. He suffered two eerily similar right front tire failures at Dover and Gateway, tough breaks that now leave him trailing teammate and points leader Johnny Sauter by eight. But aside from those two DNFs, along with a quiet 13th-place finish at Daytona, where he simply stayed out of trouble and brought the truck home in one piece, Crafton has been right around the top 10 all season long.

“We’ve been pretty good at Iowa, and I think it’s really because that track just fits my driving style,” Crafton said. “Iowa doesn’t drive like a short track, even though it’s less than a mile. You might think I’m crazy, but to me, it drives more like a mile-and-a-half track, with the taste of a short track. The trucks can run wide open around there, making it not only a challenge, but a bunch of fun.”

Aside from that trio of drivers, you’ve got plenty of “young guns” running this weekend now that NASCAR has relaxed the minimum age to compete at some of these smaller tracks. Erik Jones, who currently holds the record for youngest winner in series history, has been strong in his starts this season and could easily find himself a winner come Friday night at the age of 18. While Jones has struggled a bit to finish where he’s raced this season, that doesn’t mean he won’t turn things around this weekend, and KBM has the equipment to get the job done.

“My confidence level this year is definitely stronger. I am able to show up at the track every week and have a better feel for what I need out of the truck and then be able to communicate what I need to the crew,” Jones said. “We’ve had fast Tundras for all three races. Unfortunately, we’ve had some situations at the end of races that didn’t allow us to get the finishes we deserved – especially Gateway, I feel like we had the win in hand there. I feel really good going into Iowa. It’s another race where I’m confident that we can unload a fast ToyotaCare Tundra, go out and compete for the win.”

But with that said, even Jones could see his record go up in smoke if Cole Custer has his way. Having only made three starts this season, it’s hard to judge whether the 16-year-old will really be a factor; however, you need only to look back at his performance at the series’ return to Gateway Motorsports Park as an indication of what he’s capable of. Custer scored his first career pole just a few short weeks ago and rode that front row starting spot all the way to a sixth-place finish. And while I’m not saying that his sixth-place run means he’ll be in Victory Lane this season, I have been impressed by Custer’s capabilities on the track thus far. Driving the No. 00 Chevrolet, fielded by Gene Haas, the rookie has finishes of 12th and 14th at Martinsville and Dover, respectively. Ryan Blaney currently holds the record for youngest winner at Iowa Speedway after heading to Victory Lane in his fourth series start, back in 2011, a record Custer would shatter should he do the unthinkable Friday night.

Clearly, there is no shortage of talent in the Truck Series, and without Cup drivers in the field this weekend, they’ll get to show everyone what they’re truly made of. Add in that we’re headed to a short track, with a history of side-by-side action and it’s sure to be one exciting race.