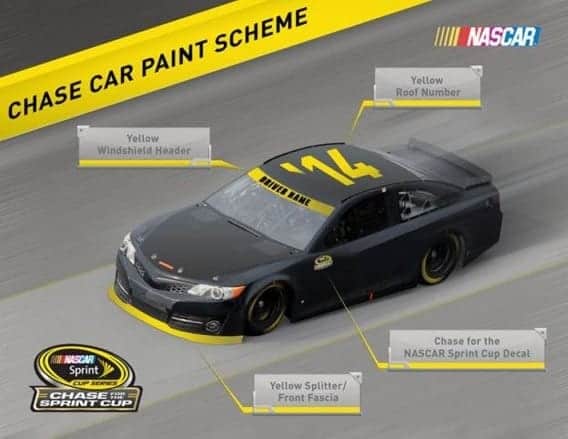 In order to help the Chase for the Sprint Cup drivers stand out once the postseason begins, NASCAR has announced a series of special elements for their paint schemes throughout the 10-week playoffs. The car of each driver will feature a roof number, front splitter, and windshield header all bright yellow, along with a Chase for the Sprint Cup logo adorned on the front quarter panel.

The Chase-centric paint schemes will be on all 16 Chase cars beginning with the first race of the Chase at Chicagoland Speedway on September 14th. Once a driver is eliminated after each of the rounds, the cars will return to their normal paint scheme.

As announced by NASCAR in January, this year’s format includes 16 drivers rather than the 12-driver Chase that has been in place since 2007. This year’s format also includes elimination rounds for the first time and wins in the first 26 races now virtually locks a driver into NASCAR’s version of the playoffs.

The number of drivers will decrease by four every three races in the Chase, with the race winners in each round and/or the drivers highest in points moving on to the next round. It will end with four drivers racing for the title at Homestead-Miami Speedway with the highest finishing driver of the four crowned the champion.

The next NASCAR Sprint Cup Series race will be the Crown Royal Presents the John Wayne Walding 400 at The Brickyard live from Indianapolis Motor Speedway on Sunday, July 27. The race will air at 1 p.m. ET on ESPN, and can be heard on MRN Radio, IMS Radio and SiriusXM NASCAR Radio.

Oh good! Yet another gimmick to emphasize the almighty CHASE above all else. Say it with me: if he ain’t got that yellow trim, we don’t give a care about him!

Maybe they could paint all the Chase cars “who gives a Sh-t brown” and each could be sponsored by toilet paper companies! That Brian France, he knows his customers, it is like he is clairvoyant or something.