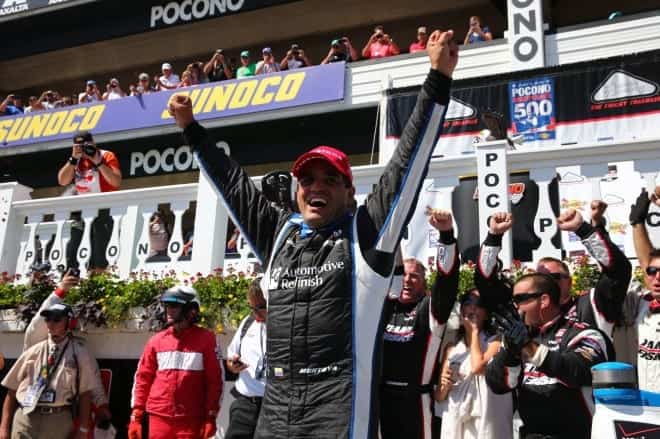 Juan Pablo Montoya celebrated in victory lane at Pocono for his first win since returning to IndyCar earlier this season. (Credit: CIA)

After spending nine years in NASCAR with some success, Juan Pablo Montoya was looking for a change at the pace at the end of the 2013 race season. That change of pace came about when a phone call came from Roger Penske, offering Montoya a ride in the Verizon IndyCar Series for the 2014 season. Montoya quickly accepted, ready to get back to victory lane.

Now 12 races into the season, Montoya has already visited the winner’s circle (Pocono Raceway) and currently sits fifth in points with a shot at the championship. It comes as little surprise as Montoya ran open-wheel before switching to stock cars, winning the CART FedEx Championship in 1999, the Indianapolis 500 in 2000 and the Monoco Grand Prix for Formula 1 in 2003.

Though even with the previous experience, the success didn’t come right away this year, with only a pair of top 5s in the first seven races this season as Montoya got comfortable.

“Well, I knew it would be tough,” Montoya told Frontstretch of the transition. “We, as a team, knew it would be tough so we laid out a plan for how we would gradually get to where we needed to be. As I’ve said before, it was a process. It’s still a process, actually. But I really believe we are peaking at the right time. We’re right there in the points battle and we have plenty of opportunities for more wins.”

In comparing the two and what it takes, Montoya said that it’s a “night and day” difference between them and that leads to the adjustment period seen so far this year.

“When you do something for seven years — I spent more time in NASCAR than any other series in my career — you have to change the way you approach things,” he said.

Montoya added that that the biggest difference between driving a stock car and driving an open-wheel car is in how you drive them.

“In a stock car you can be the best driver in the world but the car is what will limit what you can do,” Montoya explained. “In IndyCar you are the limit because the car is capable of amazing things.”

Now comfortable and re-acclimated, Montoya has posted four finishes of seventh or better in the last five races and said that he is starting to really get comfortable now, especially on the street courses.

“We’ve had really good races but haven’t qualified very well so we consistently have to dig out of a hole,” Montoya said. “The ovals have been really good to me so far and I’m looking forward to the second half of the year.”

Of course, the biggest of those being at Pocono when he won pole and led 45 laps en route to victory.

“Obviously the win at Pocono was a big moment for me, not just for this year but a big moment in my career,” he noted. “Whether it was Roger Penske or Verizon or Chevrolet, I had a lot if people that put their faith in me. To reward them with a win was very cool.”

Coming off of a 15th-place finish at Iowa Speedway, Montoya is hoping to repeat the second and seventh at Houston last month, possibly better it, to bounce back and keep himself up near the front of the points.

“Toronto can be a very tough, physical race,” he commented. “It’s always a great event and one of the marquee races on the schedule.”

Montoya said the key to having a good weekend will be to qualify well so therefore he makes it easier on himself, but definitely has the confidence that this weekend could be successful. And well it may be a pair of races rather than one, there isn’t anything different that Montoya does to prepare himself.

“You try to get as much rest as you can after the first race, especially if it’s a really hot weekend like Houston,” he added. “On a normal IndyCar weekend we would be on track anyway so it’s not much different. It’s harder on the crew guys because they have to turn the car around overnight to get ready for the second race. If you have any kind of issue they can be at the track until midnight.”

With the success that Montoya has had since beginning his racing career in 1992, it certainly makes it hard to pick just one favorite racing memory from the list. Though reflecting back, Montoya said that certainly Pocono stands out.

“Rick Mears said he enjoyed his fourth Indianapolis 500 win as much as his first one. I kind of feel that same way about my win at Pocono this year,” Montoya said. “You know you have the ability to win races, but you never know in this sport. That’s what makes it great; nothing is guaranteed. And it was really cool to win a race for Roger Penske. I mean, look at the drivers he has employed. It’s pretty unbelievable. Winning the Indianapolis 500, in the manner we did it was amazing too, as was winning the Grand Prix of Monaco.”

To those looking to get involved in racing, Montoya’s advice is simple: be prepared to work very hard.

“You have to be very passionate and serious about doing this,” he explained. “We’ve seen a lot of drivers that just thought it would be cool to be a racecar driver and they weren’t serious. They aren’t racing anymore. If you have talent there is a good chance someone will give you a chance. Don’t blow that chance.”