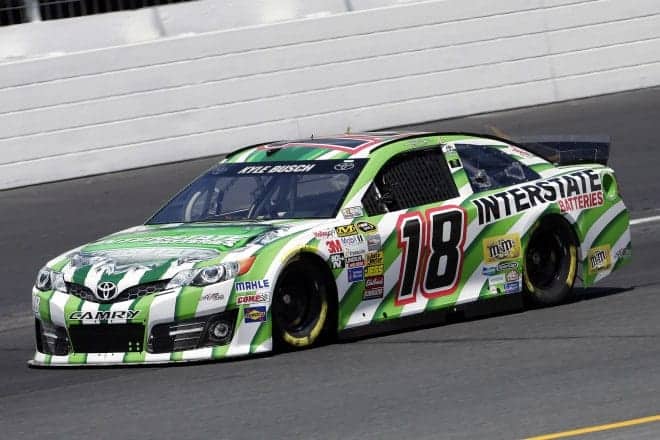 Kyle Busch in his No. 18 at New Hampshire Motor Speedway. (Credit: CIA)

A stop at New Hampshire Motor Speedway marked the end of TNT’s Summer Series and a served as a precursor to the NASCAR Sprint Cup Series’ last off-week, or calm before the storm that is the wicked countdown to the Chase and the highly anticipated playoff eliminators.

This edition of Who’s Hot and Who’s Not marks a return to good old-fashioned short track racing, after Mother Nature played a predominant role in the outcome in Daytona.

Brad Keselowski is the kind of guy that can have a good week out of nowhere. He’ll go to a track where his prior results would suggest that a mid-pack finish is expected and figure out a way to win.

Lately, Keselowski has been the complete opposite. He’s become very easy to predict over the last few weeks. In Kentucky, he was the happiest driver during Happy Hour and then cruised to his third Coors Light pole before owning the field on race day. Flash forward two weeks and things played out almost identically at the Magic Mile. After qualifying seventh, Keselowski swept Saturday’s practice sessions. He also won, again.

It was like watching Game of Thrones character Viserys finally earn his “golden crown.” I knew Khal Drogo would give it to him eventually; it was only a matter of when. Keselowski earned a crown of another kind Sunday in the form of a gigantic rock lobster, an NHMS tradition.

No matter what the Camping World RV Sales 301 threw at him, Keselowski was able to overcome partly because of the No. 2 Redd’s Apple Ale Ford’s ability to power through corners and exit turns with a lot more momentum than, well, anyone else. Whether it was a group of gamblers led by Jeff Gordon, who decided against pitting in the clutch, or a spinning Justin Allgaier, nothing could keep him from getting to victory lane.

That includes Kyle Busch. Busch played supporting man to Keselowski for the second day in a row after his runner-up finish in the Bluegrass State. There was also that freakish rollover in the aftermath of Talladega’s Big One. Whether upside down or right side up, he’s had no shortage of camera time recently.

Post-‘Spingate’ Clint Bowyer has been anything but scandalous. Nothing extremely outlandish happens to the Michael Waltrip Racing driver, outside of a lot of bad luck; fortune that kept Bowyer outside of Chase talks through the first half of the season. Lately, however, some of that karma has dispelled from the No. 15 Toyota; Bowyer is no longer suffering from as many mechanical and personnel letdowns. That’s not to say, however, that he’s immune from the effects of forces outside his team’s control.

When Allgaier’s wreck created a green-white-checker scenario, those daring strategists faced the hard realities of a fuel crisis. Bowyer was not among those sweating it out, but Kevin Harvick was. Harvick’s No. 4 ran dry on Sunoco fuel and stacked up an entire line of cars including Bowyer, who lost a few positions in the ensuing scramble before finishing sixth. Long story short, he again provided some discouraging post-race remarks, proclaiming the events of those closing moments his “M.O.”

If there was ever a time for Bowyer to stop using negativity as his calling card, that time is now. Things aren’t as bad as they seem. Then again, maybe Bowyer already senses the turning of the tides, having acknowledged later in the same release that he and crew chief Brian Pattie have discovered the secret formula for consistency. He’s scored five top 10s in seven races and led as many laps at NHMS (36) as he had in the previous 18 events combined. He also just cracked tenth in the standings for the first time, giving him sole possession of the third wildcard spot (14th overall).

For people who bet on NASCAR, Jimmie Johnson is always a safe choice. Going into Loudon, things were no different and it’s not surprising why. His career numbers there rank highly in every statistical category.

What oddsmakers cannot predict is exactly what happened to Johnson. The No. 48’s left-rear tire lost pressure after only eight circuits and Johnson lost a lap to the leaders. That wouldn’t have been a big deal, if only it hadn’t happened again shortly after. The second flat, more of an explosion, sent him careening into the wall and out of the race.

Back-to-back 42nd-place finishes don’t do much to hurt Johnson. Yes, he dropped two spots in the standings. But, does it really matter at this point? Barring any sort of catastrophic injury or the like, that knocks him from competition, Johnson will suit up at Chicagoland Speedway Sept. 14 with eyes on grabbing a mind-blowing seventh Cup title. His three wins and 322-point advantage over 31st-place David Gilliland make that highly, highly probable.

The only reason that this Talladega-NHMS run of DNFs is notable is the rarity factor. It simply (almost) never happens to the Hendrick Motorsports powerhouse that is the Lowe’s bunch. The last time anything nearing this magnitude came to being was a four-race rough patch leading up to the 2013 Chase. Before that, there’s… OK, it takes a lot of scrolling to find anything that vaguely resembles what has occurred in Cup’s last two stops. Is this A) merely a trivial hiccup or B) Johnson’s ruin?

Ever heard the story about the tortoise and the hare? They race each other and the tortoise wins because the hare decides to take a nap after getting out to a big lead. At Loudon, Morgan Shepherd (39th) and Joey Logano (40th) reenacted that story, only it featured one less nap and one more totaled Ford Fusion.

As to be expected, the 72-year-old Shepherd, piloting Circle Sport’s coldly acclaimed No. 33, played the part of the tortoise and Logano the hare. In this case, the tortoise took the hare and splattered him against the wall as he attempted to pass. Easy to say, Logano remained insistent that NASCAR should incorporate a drivers test for the NSCS. After Shepherd planted his right front into Logano’s left-rear quarter panel, it became apparent why. What’s unclear is why Shepherd (several laps down) remained insistent on holding the lower line even while being lapped repeatedly, when other lap cars routinely moved up and out of the primary groove.

Perhaps Logano is onto something. After all, Shepherd did appear to stall his car while moving around the mess caused by Johnson’s demolished Chevrolet. It was right there on TNT’s broadcast. It took a safety truck to get the No. 33 going again. While that’s possible to do given the switch system inside the Gen-6 models, wasn’t that more of a ‘13 issue for everyone else? Where was Shepherd for that lesson?

Whatever the verdict, one thing is clear: the tortoise (27 laps off the pace, yet running at the finish) bested the hare in New England.