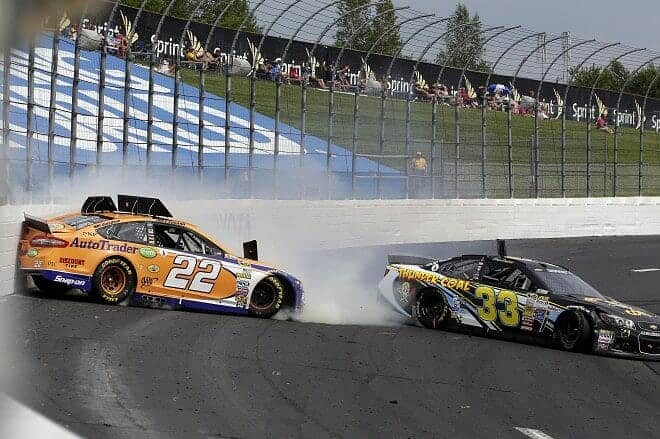 Wow the kids sure got angry over the incident with Morgan Shepherd and Joey Logano this Sunday at New Hampshire! Not sure why – between this and Jimmie Johnson blowing two tires in less than 15 laps, it was the only real action of the day. Logano’s ire was understandable, though the age issue seemed to be more of a media generated story due to Shepherd being 72 years old. I have but two points to make on this one, and we’ll let it go.

One: He is a Nationwide Series regular (though sponsor funds have curtailed his participation the last couple of years) and has no issues with anyone – including Logano, who races in it quite often.

Two: Is it possible that the car was just THAT big of a turd and was the reason why he was nearly 15 mph off the pace?

It might have had a No. 33 on it, but it wasn’t the Richard Childress Racing No. 33 – it was owned by Joe Falk and sponsored by Thunder Coal. So far this season the car has an average finishing position the same as its sometimes-driver David Stremme: 37th. Shepherd finished 39th Sunday, his wreck notwithstanding. The issue isn’t with the driver – the car was just that bad and Logano caught him at a bad part of the track. If the car came around at that speed, imagine how much mechanical grip it didn’t have.

Morgan Shepherd has done more with less the last few years, to the point where he had made it known he was going to have to help pit the car himself due to lack of funds and man power. He has four Cup Series wins in his career as well – not too bad of a success story for a guy who as an adult was illiterate and learned to read later in life. He has been an inspiration for many and competes as well for those who are unable to, including a friend of his who was hit by a drunk driver.

Oh and for what it’s worth, nobody seemed to have a problem with James Hylton contending in all 21 ARCA races last year at age 78 — and hasn’t John Wes Townley made a career out of that same sort of thing?

It’s for sure been a rough year for Roush Fenway Racing. Persistent rumors of Carl Edwards and/or Greg Biffle bailing, Ricky Stenhouse, Jr. running worse than last year – and that’s just the Cup side of the coin. In Nationwide, Ryan Reed was wrecking early on with the sort of regularity that would make Travis Pastrana blush, while Trevor Bayne has been consistent – just not spectacular – scoring just two top-5 finishes in the first 17 races. Edwards did win at Sonoma, however it’s his only top-10 finish in six weeks. Biffle has been no better, with just one top 10 (barely – a ninth at Sonoma) in over two months. Stenhouse has had similar suck-cess, with a 10th at Talladega the first week of May, and a ninth this week at NHIS.

When the Penske cars are winning every other week or in contention for wins, and the Roush cars are routinely praying for Lucky Dogs, caution flags, and looking for something in the interior to rip out and deposit onto the track, the team that was once the standard bearer for the Blue Oval has fallen on hard times. It’s not something that is going to get fixed overnight, and should another one of their A-listers jump ship as it looks like one will, the long row to hoe is going to take a few more circuits to dig out of.

Talk to My Lawyer!

With the announcement of the Race Team Alliance (hereafter to be known as RTA), the not-a-union of the major race team owners last week, NASCAR was nonchalant in its response, and made it be known it was willing as always to listen to and work with the owners and teams to find mutually beneficial solutions. On Tuesday it was made known that the only communication that the RTA would be having with NASCAR is through their respective legal teams.

Well, how could anything possibly go wrong?! After all, isn’t this just a group of guys trying to get a group rate at the Super 8 and a bump up from coach if there’s room on the plane? The perceived power struggle that many had predicted with the formation of this group is going to turn real. I can only imagine what will come the first time a grievance is aired, be it regarding the cost of proposed engine changes, the substance abuse policy, or the next time a Goodyear tire is flat on the bottom. On the surface it sounds like the real drama won’t be on the track next year, but possibly in briefs, complaints and other legal wrangling.

Vito is one of the longest-tenured writers at Frontstretch, joining the staff in 2007. With his column Voice of Vito (monthly, Fridays) he’s a contributor to several other outlets, including Athlon Sports and Popular Speed in addition to making radio appearances. He forever has a soft-spot in his heart for old Mopars and presumably oil-soaked cardboard in his garage.
Previous Tech Talk with Doug Randolph for Eldora: Shaker Screens, Truck Arms, Tear-Offs and Track Moisture
Next Going By the Numbers: Ryan Newman Peaking at the Right Time