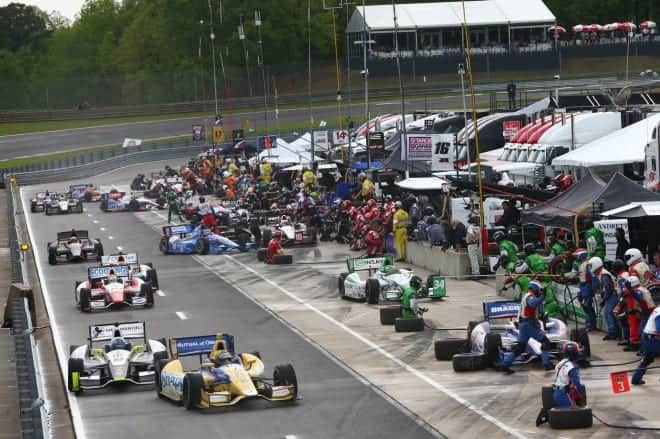 Last week’s race at Iowa came across as quite the show.  It featured good racing, a brainfart or two, and a strategic move that determined the winner.  When Ryan Hunter-Reay came into the pits for four fresh Firestones, no one anticipated that he’d be able to make his way to the front as easily as he did.  The win helped ease the pain of a rough slew of races for Hunter-Reay since he won the Indianapolis 500.

While the win must have buoyed the spirits on the Hunter-Reay team, it must have been rather deflating for everyone at Chip Ganassi Racing, especially Tony Kanaan and Scott Dixon.  Those two drivers looked poised to take the top spots on the podium when Hunter-Reay whisked by on his new tires, continuing the frustrating season that those at CGR have been enduring.

Another driver who showed his frustration at Iowa was Juan Pablo Montoya.  After earning the victory at Pocono, JPM looked ready to continue to ascend in the standings and was putting together an excellent race when Ed Carpenter, doing his best to nurse his car, came down and chopped JPM, ending both of their nights.  Montoya is still hanging out in the fifth spot in the points standings but lost ground.

This weekend is another one of double races, and they’ll be doing so at the same time on both days.  Last year, Scott Dixon swept the Toronto races and asserted his place in the championship run.  No driver has yet to sweep any of the duals this year, which doesn’t mean that it can’t happen, but rather shows how difficult it is to accomplish such a feat.

Once again the news cycle seems slow for IndyCar.  For as fast as their cars go nothing has been developing with any kind of alacrity.  It’s possible that the early end to the season on Labor Day means that many of the stories will come around that time and in the offseason.  Surely something is bound to happen.

The track is a street course featuring both asphalt and concrete.  It’s 2.824 km long (for you Canadian fans) or 1.755 miles and consists of 11 turns.  Gil de Ferran holds the track record, set in 1999, at 57.143 seconds.  Both races are 85 laps in length.  Race 1 begins with a standing start with Race 2 starting with the common rolling commencement.

Helio Castroneves broke the tie with his teammate Will Power and now holds a nine-point edge.  Hunter-Reay’s win brought him to just 32 points arrears of the leader, while steady Simon Pagenaud is in fourth behind by 50 points.  JPM rounds out the top 5, sitting 65 points back.

The race at Iowa was a tight one and Chevrolet edged out Honda 103 to 91.  However, the season-long standings show a much larger gap with the bow-tie having 1734 points to Honda’s 1177.

It may seem silly to choose Will Power, but he’s the obvious choice.  With his rough weekend in Houston and now the strange fade to the back from the front in the closing laps at Iowa, Power is in need a strong performance, especially if he’s trying to keep up with Castroneves.  Power has won at Toronto twice before, which means, at the very least, that he’s decent there.  Will he be feeling too much pressure or is now being the position of having to chase the points leader something that will bring out his best?

Qualifying for this weekend is a bit goofy as the sessions are held the morning of each race, beginning at 10 AM EST.  The qualifying sessions can also work as a way to shake down the car for the race, so some teams might be taking a different strategy going into them.

Double the races, double the picks.  Scott Dixon.  It’s time for him to finally win one, right?  The second race will have Hunter-Reay crossing the finish line first.  Frontstretch’s IndyCar editor Toni Montgomery sees Castroneves and Pagenaud taking the wins, while IndyCar writer Matt Stallknecht is taking Will Power to sweep in a redemptive weekend.

The series takes a one-week break before visiting the track at Mid-Ohio.  The race takes place on Sunday, August 3, and begins at 3 PM EST.