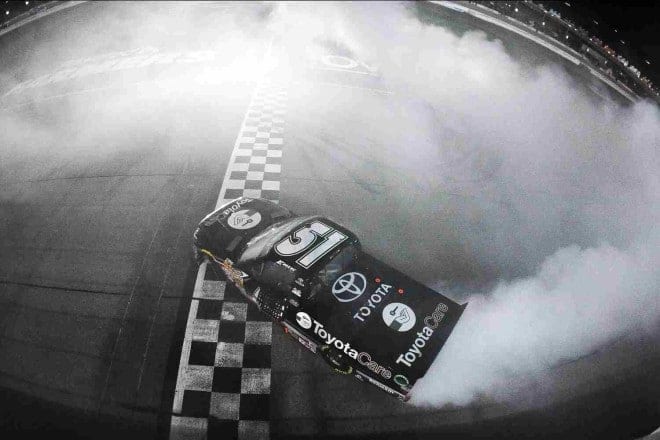 Erik Jones will make his Nationwide Series debut this weekend at Chicagoland Speedway with Joe Gibbs Racing, and I for one am hoping to see him obliterate the field.

I’m talking lead every practice session, qualify on the pole and then go wire-to-wire. After all, he will be driving (practically) a Cup-lite car capable of the feat and Jones is no slouch behind the wheel. So why not go crazy this weekend and make an entrance worth talking about? This kid with his two career Camping World Truck Series wins that feel like they could be 20, which is crazy because he’s only run nine career events.

But Jones is a driver, for now, who you can’t help but root for.  Eventually though, as he wins more and rises through the ranks I have no doubt the novelty is going to wear off for some.

But right now? Oh, right now he’s fun to watch. He’s on a long NASCAR road that will turn out to probably be more successful than anyone can imagine. It’s a great start – and story – when you beat the guy who turns around and hires you. Whipping Kyle Busch at a short track, in lesser equipment, is the stuff dreams are made of, what movies are based off of.

Since his arrival, Jones has been the pimply-faced kid who you want to see what he does next. I was not the only one who greatly enjoyed the battle between he and Ross Chastain late last year in Phoenix. And I mean really enjoyed it, went back and forth on who I wanted to see win because both would have been first timers, both were driving like controlled madmen and deserved it.

The thing about Jones is, you know there is something special there. While he might drive some of the best equipment out there, he’s wheeling the thing as well as Busch would. Sometimes, if you’re not careful, you might think that the 40-time Truck winner is actually behind the wheel. Thankfully he’s not and we have the shiny new driver in Jones to watch.

He is entertaining, right? Humbled and right-minded, which for right now is fine as he makes his reputation but I’ll admit, eventually I wouldn’t mind to see him really tell us how he feels. Jones has been spun out twice late in the Truck races this year, both while running in the top 5, and he took it. Even though he was unhappy, he just trudged along, though he always back with a vengeance though.

Saturday, Jones will keep his head down and do what he does best, charge until the checkered flag is flown. It might be his first Nationwide start but with a company like Gibbs behind him, Jones should be charging hard up front. He’ll fit in around young guns Chris Buescher, Ty Dillon and even Trevor Bayne, who is already headed to the Sprint Cup Series. And he’ll fit in very well with fellow teenager Chase Elliott.

In fact, years from now when you’re reading the stories that were covered by myself and others about their championship successes, the plot will be about how we all watched them learn the limit, earn their stripes and take their place.

Saturday we’re going to see that Jones is ready for the next step in his career; we’re going to see that he can and has been going against the best the sport has to offer. I won’t, however, sit there and be all that surprised. Remember, that’s is how Jones got the job in the first place, though Chicago is a long way from that short track in Pensacola, Florida.

An event that the year before (2012) put him on the map is now about to further solidify the decision to put Jones in a car as well as bring him to NASCAR. It was December of 2013 and Jones had finished second to Chase Elliott in the prestigious Snowball Derby at Five Flags Speedway, or so he and everyone else that emptied out of the facility thought. Then hours later the whispers from the inspection shed started. Elliott was thrown out. If Jones passed, he was to take home the trophy for the second consecutive year, this time driving for the man, Kyle Busch, he beat for his first title the year before. Everyone waited and a crowd gathered. Jones stood in jeans and a t-shirt, amongst his team that thrashed away at his machine to prove it was legal and make it official.

When it was, he followed his team as they pushed the machine through the empty infield, back towards a makeshift victory lane and the five remaining media members that were there to get his emotion. That emotion  hasn’t changed since that day. Jones is still the eager, talented and grateful kid from one race to another. He gives everyone his time and attention and gives his machines the time of its life.

Saturday, Jones will do all the same. But now, on a much bigger stage and I hope he makes it all about him.

“I was not the only one who greatly enjoyed the battle between he and Ross Chastain late last year in Phoenix.”

Is it really asking too much for even a semi-professional writer to use correct grammar in her writing? The correct usage is “between HIM and Ross Chastain.” Objective case after a preposition. Okay? When you get third-grade English grammar right, I might even be able to care about the content of the article.

Kelly, Remember when people without blood ties watched the Cup World Toyota Series and knew the drivers. Since nobody knows Eric Jones his NW debut is of little interest except to his mom and Aunt Maude. Although, no one is watching NW either so the announcement that Elvis is back and making his series debut would go equally unnoticed.