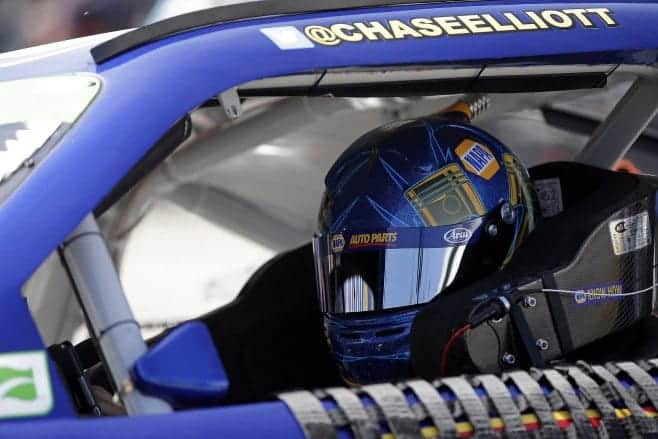 Chase Elliott had chances at winning the last few weeks go out the window when he ran out of fuel on more than one occasion. Saturday night at Chicagoland Speedway in the EnjoyIllinois.com 300, however, the No. 9 team played the pit road strategy perfectly to put themselves out front when it mattered the most.

Elliott led a race-high 85 of 200 laps to earn his third win of the 2014 season and made it seven for JR Motorsports. On a night when green flag pit stops were the name of the game, Elliott was continuously the first driver on pit road to begin the cycle in order to find himself back out front when they were through. He arrived at the checkered flag over three seconds ahead of Trevor Bayne.

While Elliott may have been the driver out front the most in an event that was low on cautions and high on green flag runs, the 18th race of the season saw a slew of drivers take their turn out front. Including Sprint Cup driver Kyle Larson, whom waged a furious battle with Elliott during a portion of the night, as well as Brian Scott who also went back and forth up front.

The two hour and two minute race featured just three cautions (one for fluid and two for debris) but 17 lead changes among 11 drivers. The final lead change came when Elliott cycled back to the lead on Lap 177, and he never relinquished the top spot again.

With his win, Elliott also retook the point lead over teammate Regan Smith, who struggled and wound up 16th. Elliott Sadler falls to third ahead of Ty Dillon and Brian Scott. The rest of the top 10 in points are Trevor Bayne, Brendan Gaughan, Chris Buescher, James Buescher, and Ryan Reed.

Brian Scott is not yet able to scratch his first career Nationwide Series win off the list but he still left Chicagoland Speedway a winner. Scott took home the second “Dash 4 Cash” prize of a bonus $100,000 as he was the highest finisher of the four drivers who qualified. The Richard Childress Racing driver admitted after finishing sixth that the No. 2 team needed more time and more adjustments in order to have a winning car. But he’ll take his prize and try to go to Indianapolis – a win he nearly stole last year – and try to win both the race and another $100,000.

Behind Scott in seventh position was a Joe Gibbs Racing driver making his Nationwide Series debut. Erik Jones has been running a part-time Truck Series schedule for Kyle Busch, but got the chance at the next level on Saturday. As he’s become quite accustomed to doing, Jones had a quiet night even though he never left the top 10 after starting fourth, and kept the No. 20 machine in one piece. Jones came home seventh and will run more Nationwide events later in the season.

His second place finish at Daytona two weeks ago was just a band-aid for Regan Smith and company. The No. 7 from JR Motorsports has struggled since the summer began in not only their finishes, but also in where they believe they should be running. Saturday night, Smith called his car evil at points of the race and eventually found himself two laps down outside the top 10.

After starting the year with 13 consecutive top-10 finishes, the summer started and the team has been fighting. Smith was 13th at Road America, 28th at Kentucky before Daytona and then scratched and clawed, while making no bones about it, for tenth at New Hampshire. As such, Smith hasn’t been able to extend his point lead and after finishing 16th on Saturday, he’s now back to second in points.

Opportunity is limited for Sam Hornish, Jr. this year in the Nationwide Series and driving the No. 54 for Joe Gibbs Racing presents the best of those opportunities to win a race. But Hornish never entered the conversation in Chicago, and the JGR team was headed home long before the checkered flag flew, leaving Hornish to watch the race from the grandstands with his daughter.

Eight laps into the race, Hornish headed to pit road trailing both smoke and fluid. The Monster Energy team didn’t take long to determine their night done after finding a hole in the oil pan. Hornish had been expected to come through the field after starting in the rear after having to fix a track bar adjuster that broke in qualifying. Unfortunately, the day went from bad to worse as Hornish finished 36th and has just three races remaining on his 2014 schedule.

Ryan Sieg and his No. 39 RSS team didn’t make as much noise as they had been the last few weeks, but, while quiet, it was also mission accomplished. Driving a 15th – 20th place machine all night, Sieg battled amongst the best teams in the business like the Richard Childress and Roush Fenway Racing drivers who also found themselves back there.

At one brief point, Sieg even broke into the 10th position, but it wasn’t meant to be in Chicago. After halfway he settled back into the top 20 where he would remain by night’s end. Sieg came home two laps down in 18th.

3 of 40 drivers are full-time Sprint Cup drivers who ran on Saturday during their off weekend.

The Nationwide standalone event on Saturday wasn’t a complete success, as the racing could have been better, but the regulars did shine in their own way. Chase Elliott won again and retakes the point lead in what has been a rookie campaign for the ages. Though his teammate is still fighting the summer slump.

Brian Scott took home the “Dash 4 Cash” and will get another chance at it again in Indianapolis, site the series next race. And racing at Indianapolis in the Nationwide Series is still something to get used to. Saturday while the regulars had their chance to grab some attention while most everyone else was on vacation but others were tuned in for some racing, they’re going to have a tall task at the Brickyard.

The field is most likely to be stacked with Cup drivers and in the series first two races away from the short track and at the big track, a Cup driver has gone to victory lane. More of the same should be expected next weekend.

The Indiana 250 at Indianapolis Motor Speedway will take place on Saturday, July 26 at 4:30 p.m. ET with coverage on ESPN.

I found this race everything a NW race should be. Young drivers running hard knowing that they had a legitimate chance to win. With Cup drivers finishing one through five every week what young drivers learn is how to settle for sixth. Learning to lose is a confidence killer that has to have a detrimental effect on driver development, which is what the series is supposed to be all about. The Very Ugly was the crowd of literally hundreds. This series is in trouble. Once (ok 50 times) I was arguing with my wife when I realized that she was right! Not partially right, all the way right. But, even though I knew I was wrong I kept arguing. Why? Because I can be a stubborn ass. NASCAR has to know by now that the fans are right about Cup drivers in the lesser series. But, like me they keep arguing rather than fix the problem. Why, because they are stubborn asses.

This is the date each year on the Nationwide schedule I just don’t understand. Let’s run a stand alone Nationwide race at a track where the Cup series runs later in the year and the weekend before one of the alleged marquis race weekends not too far down the road.
How about staging a race in the Cup off-week at a track where this race would be a bigger deal. Maybe South Boston or Myrtle Beach or any of other tracks NASCAR abandoned in the last 15 years.
Sadly, for the 30 minutes I tuned in, I was as interested if I would see an accidental crowd shot as I was with the action on the track.

I think the only people in the stands were the family members of the race teams. Yeah, just take away the cup drivers, that will solve it. LOL. What narrow minded thinking. Nascar is dying and it’s because of what nascar itself has done and is doing that is killing it.

You run that race at the old Nashville Fairgrounds and it would be packed with more people than who showed up this weekend. Guaranteed.

Trevor Bayne matched his season best. He believes he can be champion. I think he’s a bit of long shot, but it wouldn’t be impossible. The season’s just over halfway and if he keeps on with the top-10’s with some top 5’s and maybe a win or a few thrown in, he could. Austin was -55 at one point last year and Trevor’s lowest was only a few more than that. Particularly if Regan Smith has a choke like last year, Chase and Ty make rookie mistakes and Sadler stumbles, as he could. Brian Scott’s barely ahead of Trevor, so I think top-5’s quite probable for him at the end of the year and anywhere within it’s possible..

I thought the racing was pretty good for a 1.5 race. Elliott and Larson really went at it for a while. I think it would have been a really good finish if Larson’s team hadn’t screwed up their final stop. The surface at Chicago has seasoned and they were racing all over the track. Still I hate standalone races at Cup tracks. The Truck race at Gateway had more people. If you live in the Chicago area why go out of your way for this race when you can wait till September and all 3 series will be there.