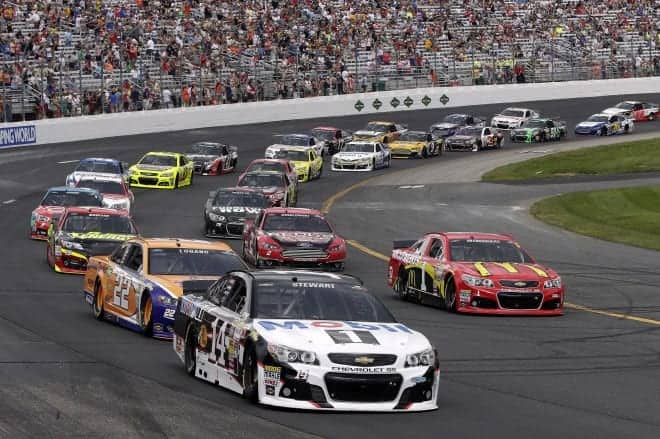 Those that have followed NASCAR for decades remember names like Jimmy Means, H.B. Bailey, and J.D. McDuffie; all were owner/drivers in which at least one of them was seen at a speedway each race weekend.  There have been several others, some of which acquired full time national sponsors and had success and even rose to fame.  These three names were the first to pop into mind though they never had a realistic shot for a race win.  For these guys, a top 10 or even a top-20 finish was a win, or on many occasions, just coming away from the weekend with enough funds to make it to the next planned event was an accomplishment.

Amidst all of the controversy stemming from the Joey Logano-Morgan Shepherd incident at New Hampshire Motor Speedway, many may not have known that there was actually a 44th car that was pre-entered to make the field.  Clay Rogers, a name that may be unheard of to Cup-only fans, was on the initial list to drive a car owned by Mark Beard and sponsored by Beard Oil Company.  Rogers has received many opportunities in his racing career and in recent years has made the most of them.  He got a ride in 2001 to drive a competitive Nationwide Series car during several weekends when Matt Kenseth, then a Sprint Cup sophomore, chose not to compete.  The results weren’t there for the young 20-year-old at the time, but since, he has amassed 36 career wins and five championships in the Pro Cup Series, a Snowball Derby victory, and two top 5s each in the ARCA Racing Series and Camping World Truck Series.

Listed owner Mark Beard competed in the first relaunched Nationwide Series race (then Budweiser Late Model Sportsman Series) held at Daytona International Speedway in 1982.  He ran on and off for several years after that making attempts at both the NASCAR and ARCA level.  Rogers and Beard paired up on select occasions in ARCA with some impressive results, including a fourth at their last outing at Iowa Speedway in 2012.  So where is all this going?

The effort was noted as a withdrawn early in the week leading up to Loudon.  Those that follow Clay’s uniquely-named @LowLightNLeft Twitter account saw that he teased this possibility back in March with a photo of an unfinished Sprint Cup car in a garage.  When a follower asked who he was racing for Clay responded that it was an independent effort.  For those cheering him on, the hopes are that they can get this car out on the track for a future date.  But can this type of thing still be done?  Appearances like these still occur at the Nationwide and Truck Series level, however, they have all but dried up in Sprint Cup.  If it does happen, sure, they probably will not set the world on fire and finishing in one piece could be a victory.  That goal in mind, though, is a throwback to how it used to be for a few competitors per race in past decades.

I long for the days when the Winston West guys would get a couple of opportunities to run with their idols when Cup came to their neck of the woods, or when the Busch North guys would mix it up with the Busch “South” drivers.  Nowadays it would be easy to make a case that the Busch North drivers from back then would have a hard time even keeping up with the K&N Pro East Series equipment of today.  The costs have skyrocketed at all levels, but one fact remains:  anyone approved for a license can still go out there and compete as long as their equipment meets minimum speed.

There are many out there that doubt that the Race Team Alliance that has recently been announced is for the good of the sport.  There is one thing that some of us have forgotten about though:  some of these owners were independents at one time in their life.  Richard Childress was throughout the 1970s, achieving mediocre results.  Businessmen Rick Hendrick and Jack Roush each took risks throwing their hats into the ring in their inaugural season in NASCAR, seeing if they could compete with the established rough and tough drivers and teams, at times not knowing if they would last past their first season.  Of course they want the long-term security for their own organizations, but are we saying that these guys have completely forgotten where they came from?  I think not.

There still needs to be a place for Clay Rogers and many other talented drivers that may not get the chance to run for a top or middle-tier team to showcase that they can be one of those 43 starters on Sunday, even if they have to do it themselves or among a group that they have closely worked with.  While it’s doubtful that we’ll see an escalation to championship form like Alan Kulwicki in 1992, but for all we know the next assembly of unheard of names could eventually become the next super team.  It’s what NASCAR was built on.  Without it, the interest as a whole in the sport lacks.

The cars are identical and expensive. I don’t see cobbling one together in a garage as an option anymore. Add to that engine specs so specific that to race one must purchase a motor from one of three or four sources. What you get is a super expensive club that it takes a fortune to join. I also lament the passing of the independent owner, but I cannot think of any scenario where we see them again. If anything, because of the ever increasing expense, I suspect NASCAR is headed in the direction of three or four ten car organizations.