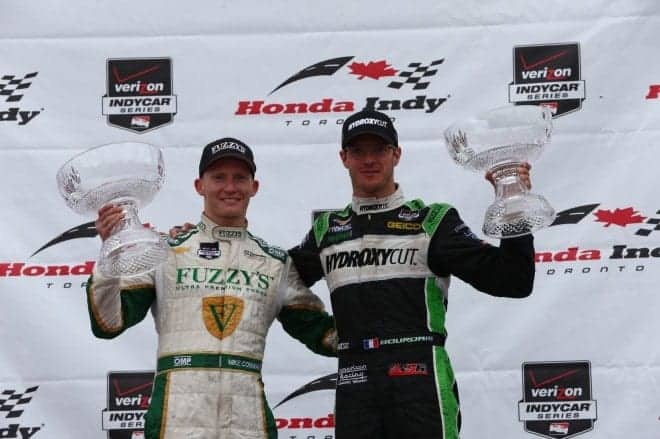 In a Nutshell: On what was easily the craziest race weekend of the year for INDYCAR, Sebastien Bourdais and Mike Conway usurped the usual suspects by each winning one of the two doubleheader races in the Streets of Toronto. Bourdais did it via sheer dominance, while Conway did it via cunning strategy and a little bit of luck. Either way, both found sweet victory on a weekend that onlookers of the sport will remember for a long time.

Key Moment: As is often the case for INDYCAR, the key moment of the weekend did not happen during the actual course of either race. Race 1 of the doubleheader was scheduled for Saturday afternoon, but due to torrential rain, it looked as though series officials would not be able to get the event in. INDYCAR then made a poor attempt to get the race started, which resulted in both the pace car and a number of contenders (including Will Power) spinning either on/before the green flag. That led to INDYCAR officials rescheduling both races to Sunday afternoon.

– The story of the weekend was obviously the fiasco that went down on Saturday. Two red flags were issued before the field even saw the green flag, and numerous drivers (including the pace car) spun in the dangerously wet conditions. Will Power wrecked his car so bad that INDYCAR considered letting him repair it before the race restarted, but the move to a Sunday doubleheader prevented that issue from becoming a more controversial affair. Power still was forced to start from the back on Sunday, leading to a mediocre ninth-place finish in Race 1 that will surely have an effect on his championship hopes.

– The Sunday edition of Race 1 saw something of a continuation of the previous day’s craziness at the race’s outset. On the very first lap, Simon Pagenaud spun in front of traffic, leading to a five-car accident that led to yet another red flag. Luckily for Pagenaud, he was able to rebound in spite of the wreck to finish fourth in Race 1.

– Ryan Hunter-Reay’s topsy turvy season continued on Sunday, as both races were rather cruel to him. Race 1 saw him battling hard for position with Tony Kanaan midway through the event, perhaps a little too hard. Hunter-Reay stuck his car underneath Kanaan’s as they entered an S-corner, and the result wasn’t pretty, as Hunter-Reay crashed hard into the wall, relegating him to a disastrous 21st-place result. Race 2 was equally as frustrating for the Indy 500 champion, as he got caught up in a late-race accident that knocked him down to 14th in the final running order.

– Speaking of Hunter-Reay, his teammate Marco Andretti had another forgettable day as well. Andretti was off the pace in both races and was only able to muster 16th and eighth-place results, respectively. Andretti has been seemingly out to lunch since his engine popped in the early laps of the June Texas race, and his free fall to ninth place in the current standings indicates something may be wrong in the No. 25 camp.

– Sebastien Bourdais was truly dominant in Race 1, leading an impressive 58 laps en route to his victory. Bourdais was the pole-sitter for the first race, taking control and never really relinquishing it. Oddly, though, for as good as the Frenchman was in Race 1, he was decidedly average in Race 2, and could manage only a ninth-place run to close out the day. Perhaps his more well-resourced competitors out-adjusted his team before Race 2?

– For as much of a runaway as Race 1 was, Race 2 had an entirely different look and feel. Race 2 was notable for the periodic bouts of rain that toyed with the event and shook up the leaderboard throughout. The Penske cars of Helio Castroneves and Will Power appeared to have the best bite on the rain-soaked track surface, but a late, untimely caution spoiled their strategy and shuffled perennial underdog Mike Conway into the lead. Conway then switched to slick tires in anticipation of a soon-to-be-dry racetrack just before the caution flew, and his gamble paid dividends. Conway stretched out the lead late over a charging Tony Kanaan and cruised to an easy victory.

– Speaking of the rain in Race 2, the on and off delays that plagued an entire day of racing forced INDYCAR to make Race 2 a shortened “time event.” Thus, instead of the race ending at the scheduled 65-lap mark, the race was instead cut off at a fixed time. This decision was hugely beneficial to eventual winner Conway, as his strategy move (made in concert with the timed aspect of the race) vaulted him to Victory Lane.

– In spite of the constant delays and the obscure decisions made by INDYCAR officials, both races saw a great deal of on-track excitement that has to be mentioned. Each saw a solid amount passing and just good, all-around racing for the duration of both events, while the periodic rain only added to the drama. INDYCAR’s street racing product truly is about as good as it’s ever been at the moment.

– Ganassi Racing’s long-awaited resurgence appears to finally be in full swing. Tony Kanaan had the best average finish across the two races (2.5) and Scott Dixon was a contender in each event as well, scoring an average result of 6.0. Even the team’s “B” drivers, Charlie Kimball and Ryan Briscoe, have been competitive as of late. It still may be a case of “too little, too late” for the Ganassi squad that definitely seems to have righted the ship… but they’re trying.

– Even in spite of the rainy weather, both races enjoyed decent crowds. Loyal fans are hard to come by these days, and it’s good to see INDYCAR has more than a few that have stuck it out over the years.

Notable Driver: Mike Conway. What Mike Conway, Ed Carpenter, and all of the folks at Ed Carpenter Racing have done this year is nothing short of incredible. Conway once again outfoxed the field and picked up a win when no one was expecting it, thus notching yet another tally next to the underfunded ECR outfit’s career win total. Conway has been a boon to this team since he joined, and he has elevated the team’s road racing program to an extremely competitive level, on par with their already stellar oval-track program. Conway truly is one of the most underrated drivers in the sport, and his continued excellence should no longer go unnoticed.

What’s Next: The Verizon IndyCar Series will get to enjoy a one-week break before the action picks back up again, on August 3rd for the Honda Indy 200 at Mid-Ohio. That race can be seen live, on NBCSN at 3PM that day.

Nice recap of both races. The Indy series has had some exciting racing this year.