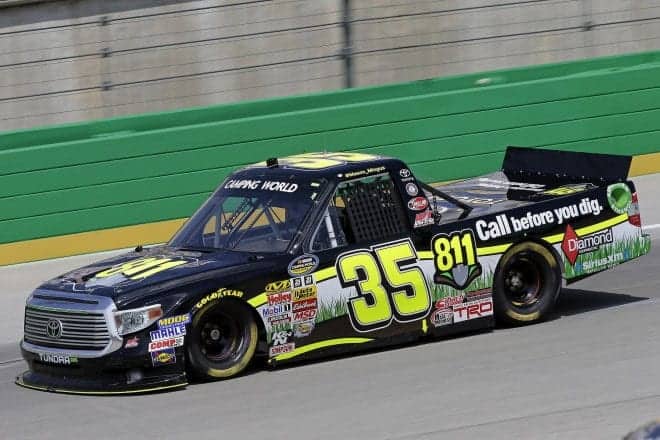 Per his Twitter account, Camping World Truck Series driver Mason Mingus confirmed that Tripp Bruce will be on the pit box for the No. 35 Toyota, beginning at Eldora Speedway this weekend. Up until the announcement, Bruce had been serving as the crew chief for Frank Kimmel in the ARCA Racing Series. WinTron Racing has announced that, essentially, Bruce and Mark Rette will swap spots, with Rette taking over as Kimmel’s crew chief.

Nine races into the season with Rette on the pit box, Mingus currently sits 13th in points with only one top-10 finish, a 10th a Kansas Speedway. Wednesday’s 1800CarCash Mudsummer Classic will prove to be an especially challenging race for Mingus. It will be his first start at Eldora Speedway and one of only a handful of dirt track races in Mingus’ career.

“Eldora should be a fun race,” Mingus said in a team release. “I don’t have much dirt experience, but neither do most of the other drivers. I love getting to go run a dirt race or two each year, though my favorite type of track is asphalt, it’s always a lot of fun to get down and dirty and sling a little dirt.”

Bruce has ten Truck Series victories to his name and served as crew chief for Johnny Benson during his 2008 championship campaign. Coverage of the second annual Mudsummer Classic will begin at 8PM ET on Fox Sports 1.