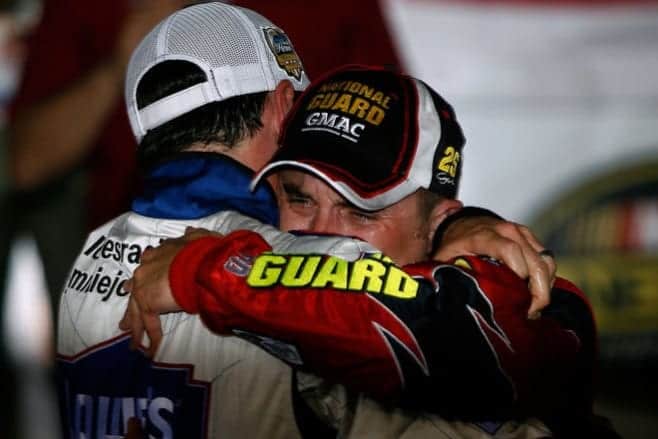 Welcome to the Frontstretch Five, a brand-new column for 2014! Each week, Amy Henderson takes a look at the racing, the drivers, and the storylines that drive NASCAR and produces a list of five people, places, things, and ideas that define the current state of our sport. This week, Amy has five NASCAR moments that stand out…and a challenge for all of you.

If anyone likes to peruse YouTube, you know that there is some fantastic (and  interesting) NASCAR content available. Browsing videos for a feature on Victory Lane ceremonies, it occurred to me that what drives fans to the sport is not always a single race or one driver, but a collection of moments—big wins, small gestures, some touching, some comical, but all resonating with people. Fans, media, drivers, and crews alike all have a collection of these moments. I’m going to share five of my favorite moments with you (they’re not in any particular order), moments that help define my passion for a sport even as it changes. Not all of them were defining moments of the sport; in fact, it can be argued that none of them are, but they are my NASCAR moments for one reason or another.

But if we leave the moments to others to define, how do we make the sport about us all, the way it has grown to be? The answer is simple: we don’t. Fans, I want to know what moments help define your passion for NASCAR, its teams, tracks, or drivers. Please post them in the comments if you wish, but please also visit our Facebook page and share your favorite video links if you can. Make the best of the sport special to other fans, if only for a moment.

The race at Talladega was Dale Earnhardt’s 76th and final victory, but that’s not the only reason I remember it so fondly. It was everything a restrictor plate race can, or at least could, be: Earnhardt driving from 18th to the front in four laps, up the middle; Kenny Wallace’s superb drafting work to give Earnhardt the win; the fact that the crash as the cars crossed the line was the only one all day despite hard racing throughout. Part of that was the rules package that allowed the cars to close and pass…a rules package that was deemed too dangerous just months later after Earnhardt’s fatal crash at Daytona, despite being run on Nationwide Series cars until recently.

Whether you loved him or hated him (and I loved to watch him race when he was clean, because nobody did it better), Earnhardt defined the sport for a generation…something no driver has done in the same way since, and I think that’s something that’s truly missing from the sport these days.

Unfortunately, I couldn’t find video of this one, but for me, it was the day I discovered NASCAR. I’d seen the popularity of the sport while working in Richmond a couple of years before, but I’d never seen a race, not even on TV, other than the highlights on SportsCenter. My dad and his friends had an extra ticket (practically gold in those days, when there was a massive waiting list for them at New Hampshire), and I went along. The day was magic, starting with the firing of the engines, but the moment, as it still is for me, was the moment when the pace car dropped to pit road, just before the green flag. That brief second will forever define racing for me, that tiny span of time when there are endless possibilities for what might unfold, when anyone can be a hero, and dreams might come true. It is and always will be the moment in motorsports for me.

The day was doubly special because for several years afterwards, it was a day I continued to share with my dad. We enjoyed quite a few Sundays in the packed stands, talking with fellow viewers and just took it all in. Dad passed away in 2008, but everything I have done and seen in racing has been because of our first race…thanks, Dad.

I’ve always liked a first-time winner. There’s just something about seeing a guy’s reaction to finally reaching the pinnacle of success in his sport that’s always special. The raw emotion of the win is one of the most real, honest aspects of the sport. No gimmick NASCAR can put in place can lessen that. This one is memorable both because it was a first win for one of NASCAR’s true nice guys, one who has always been loyal to his fans and no matter what, loves what he does. But what has always stood out to me was the reaction of Jimmie Johnson to Casey Mears’ victory. Johnson, who’s known Mears since both were teenagers, is clearly almost as excited for Mears as Mears in himself, and shows more emotion for his friend’s win than he has for some of his own. Not because his own are not meaningful, but sometimes, racing’s brotherhood is just as important. That was one of those nights, and one of my favorite victory celebrations.

It started out as an ordinary practice session, but that quickly ended when Kenny Irwin, Jr. lost control of his Cup car in Turn 3 at New Hampshire, and slammed the wall. It was the same place that Adam Petty had hit the wall in his fatal crash just two months before, and the result was, ultimately, the same. Irwin died instantly, and the world stood still. I was at the track that day. I remember waiting on word, knowing all the while that it wasn’t good. The medevac helicopter fired up, but never took off. The car was covered with the blue tarp that’s synonymous with a fatal incident. Finally, Irwin’s souvenir hauler closed its windows, and we all knew. Official news didn’t come for a little while yet, but we all knew.

I’d been at the track for the Busch Series race the day after Petty’s death, but Irwin’s was the first I experienced first-hand, the first time I came face-to-face with the ultimate cost of racing. I have never forgotten that day, and I applaud the safety innovations that have come along since. That day, that weekend, was a lesson in how painful the sport can be.

The day Irwin died, a huge double rainbow appeared over Turn 3 at Loudon, where two young, talented drivers lost their lives before we got to see what they might accomplish. I always liked to think of it as a sign that somewhere, two drivers with hot shoes were racing together, flat out, belly to the ground, racing for home.

The video below does not show the fatal crash (I’ve never agreed with those videios being posted online for all to watch over and over), but of the aftermath, and some of the emotion that drivers, teams, and fans alike shared that July day.

Really? A list of poignant moments in racing and two guys racing for the port-a-potty makes the list? Well, yeah. It’s pretty simple, really. It’s a reminder that racing, like anything else in life, can’t be taken too seriously. There’s plenty in life to laugh at, and racing is no different. The little moments where we can all remember that this is just a sport, just for fun. This moment, especially with Dave Moody’s fantastic play-by-play, is fun.

And if nothing else, it’s a remainder that underneath it all, the drivers are unabashedly, unwaveringly human.

Thanks for those moments, Amy. I have my own personal list of course as any race fan probably does and it is nice to have people share their own – it is a way of all of us bonding.

I have cried over the losses and cheered for things going right. My favorite moment was being at Martinsville when Jeff Gordon came back from 3 laps down and won the race.

Sweet stuff there. A couple of my favorite finishes are Alan Kulwicki’s championship finish at Atlanta in 1992, and Ricky Craven and Kurt Busch’s door banging side-by-side finish at Darlington in 2003. As for memorable post-race moments, Ricky Rudd’s victory lane interview at Martinsville in 1998 while lying on his back due to burns caused by a faulty cooling system is one I’ll never forget.

Great stuff. I still have several COMPLETE races from the ’90’s on VHS. Man, I miss the Winston Cup days so much.