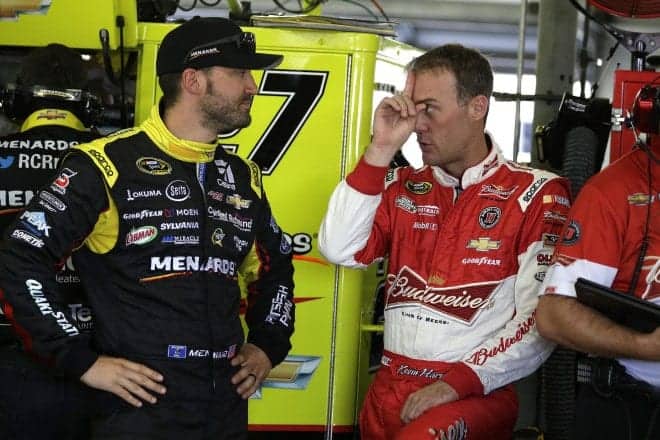 Summer might be in full swing, but with seven races remaining before the Chase cutoff, things are only starting to heat up in the NASCAR Sprint Cup Series. Drivers and teams received a bit of rest and relaxation over the season’s final off week but now, it’s back to business as stock car racing’s best prepare for Indianapolis Motor Speedway, the site of round 20.

This edition of Who’s Hot and Who’s Not delves deep, in search of the stars who will benefit most from Cup’s summer vacation during the season’s playoff push.

Ryan Newman hasn’t exactly filled up the stat sheet in 2014 after winning at IMS last year, given a glance at his inaugural campaign with Richard Childress Racing. He’s done quite the opposite, actually.

It’s not that Newman hasn’t accomplished anything; it’s more that he hasn’t added anything, lately so newsworthy it screams “Rocket Man!” Newman has yet to visit victory lane and he definitely isn’t collecting pole awards right now. Still, Newman is deserving of a pre-Brickyard look; he is a Hoosier State native, after all. OK, so maybe being from Indiana isn’t enough on its own to don him worthy of the most desirable spot in Hot or Not, but finding reasons why he is isn’t exactly rocket science.

Newman took the title of top dog at RCR from Paul Menard after Menard petered out at Darlington and hasn’t relinquished that position since. However, it wasn’t until June rolled around that Newman began to show signs he’s taking things to the next level. A seventh at Pocono tied his season’s best, and then he improved on that mark with a third in Kentucky. The No. 31 Chevrolet rolls into Indianapolis hot off a fifth at Loudon – the team’s third top 10 in six races – that puts Newman seventh in the standings.

Newman isn’t performing like a headline-grabbing boom-or-buster such as Kevin Harvick. Instead, he’s relying on a steady 14th-place average finish (sixth best in Cup) to stay relevant in this win-intensive climate. And although he isn’t even as flashy as fellow WINNER Club absentee Matt Kenseth, Newman still has a chance of one-upping the more prestigious Ned Jarrett/Kenseth/Benny Parsons/Bill Rexford Club comprised of drivers who captured a Cup title with only one victory.

At the butt of Hendrick Motorsports’ impressive season to date lies Kasey Kahne. The oft-forgotten fourth wheel at HMS, Kahne hasn’t contributed much to his organization’s good times. Even by his standards, Kahne is grinding through a down year, amidst the mounting pressures of playoff bubble-dom. All of these issues, paired with Chase Elliott looming down below make it easy to bash the veteran, but that’s not the point; exploring abstract driver trends means finding the golden lining in his 17th-place standing.

Simply having the opportunity to log laps in a ride as prestigious and technically sound as the No. 5 on a weekly basis is a huge plus, and it gives Kahne a chance to sneak into the win column even when he doesn’t have his A-game. The Chevrolet’s ability alone will give him a shot at Indianapolis, but Kahne will bring more than just raw potential to the famed 2.5-mile circuit; he brings a history of consistency.

Kahne is coming off a career-best third at Indy in 2013 and has the fifth-best average finish there (10th) over the last six years. That’s good, even if Jeff Gordon and Jimmie Johnson are two of the drivers who fared better over that span. So maybe he doesn’t live up to the standards of those championship-laden teammates, but those numbers make Kahne appear a safer pick than Jamie McMurray or Menard, both of whom are previous winners.

Kahne and Newman are among those battling in “wild card” spot territory now, but their scenarios are more favorable than many of the others. Newman appears solid because he’s built a buffer of over a race’s worth of points between himself and the current cutoff. And Kahne? Well, driving for HMS almost guarantees a Chase bid, right?

The others aren’t as fortunate for a variety of reasons, but there’s a common theme, at least in this edition of Hot or Not: a lack of success at IMS. Something about it just makes sense.

Greg Biffle has performed well in the more distant past, but last season’s 24th combined with a lack of power from Roush Fenway Racing hurt his outlook. Still, his chances of accomplishing something noteworthy Sunday are better than Brian Vickers’ probability of doing so.

Vickers’ 18.9 average finish isn’t spectacular, a reputation as a mid-packer at Indianapolis that won’t help his cause after swinging and missing at last year’s victory summit for his NASCAR career – New Hampshire. He, along with Marcos Ambrose will need to look elsewhere for that all-important win to get them over the Chase hump.

Look at the list of previous winners at IMS. Names like Bobby Labonte, Dale Earnhardt, Bill Elliott, Dale Jarrett and Ricky Rudd populate the track’s history book alongside present-day stars Gordon, Johnson and Tony Stewart. It could be said that like the perfect wine or cheese, drivers tend to improve with age at the track. All of those household names had many miles under their belts before they ever kissed the bricks, establishing themselves as one of NASCAR’s best. What does all this history mean? Don’t expect a rookie to find an easy way into the Chase this week.

It would appear that Austin Dillon and Kyle Larson have distinctly different driving stills. Dillon plays the part of “gravity.” Doesn’t make sense? Let’s try again; if nothing else, Dillon is consistent. It might not be a perfect match, but gravity always plays by the same rules. Like his teammates, Menard and Newman, Dillon has ridden consistency to a 14th-place spot in the standings, completing more laps than any other drivers this season. Meanwhile, Larson has whipped around much like a Six Flags rollercoaster, experiencing all levels of vicissitudes in a more highlight-worthy showing. But, don’t expect the tandem to make a large impact in the Crown Royal/Brickyard 400.

Dillon has one Brickyard start, a 26th in the No. 33 RCR Chevrolet last year. While uninspiring, RCR’s recent form at the track suggests that things might not get better this time around. None of the organization’s entries has finished better than 12th since Menard won in 2011. Larson, like the other rookie of the year contenders, will be making a Cup debut there. Both have put on an intriguing battle to this point, but they will likely need to wait until Pocono to resume any plans of a playoff berth.

Outside of a small group of drivers, those without much Indy experience don’t do well there. Of the drivers with less than four starts at Indy, Aric Almirola is the most successful. In two prior appearances, he compiled an 18th-place average finish with no top 10s. Other young guns like Trevor Bayne and Ricky Stenhouse, Jr. are way off the radar, a trend you shouldn’t expect to change this weekend.