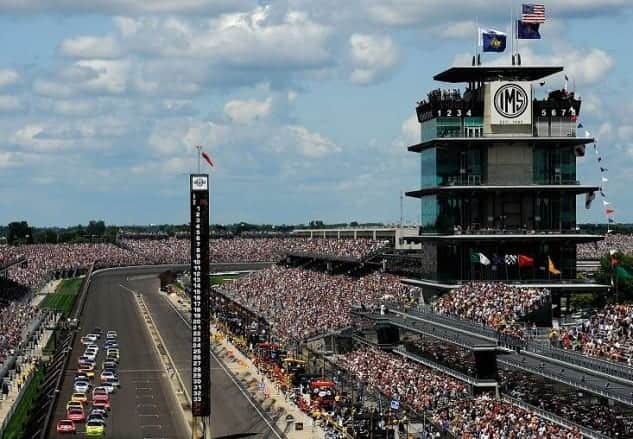 What is the most memorable Brickyard 400 moment of all time? Photo Credit: Rusty Jarrett/Getty Images for NASCAR

The Sprint Cup Series returns to action at the Indianapolis Motor Speedway Sunday after its final week off of the season. The question now with the Chase spots being on the line,  will they be racing the same way by being worried about nothing but wins, or concerned about points? Clearly, there are going to be some drivers who will be in a go-for-it mode in the final seven regular season races, some who will play it a bit more conservative and others, well, will probably make the decision on a race-by-race case.

So, looking at who has already won this season, you can pretty much count them on the go-for-it list:  Jimmie Johnson, Jeff Gordon, Dale Earnhardt Jr., Brad Keselowski, Joey Logano, Aric Almirola, Kyle Busch, Denny Hamlin, Carl Edwards, Kevin Harvick and Kurt Busch already have at least one win and all they are looking to do is add another win to help their standing in the opening segment of the Chase.
Then you’ve got the ones who absolutely have to go for it to have a shot to make the Chase. That includes Marcos Ambrose, Jamie McMurray, Martin Truex Jr., Casey Mears, A.J. Allmendinger and Danica Patrick. If they come into a situation where they can win a fuel mileage race, they will almost certainly take the fuel tank down to the last drop. Or, as was the case with Almirola, if they are leading and there’s a rain shower past the halfway mark of a race, they will stay out and pray that it keeps raining the rest of the day. Finally, you’ve got the drivers who are stuck in the middle and may be on a race by race decision. Well actually, two drivers that are pretty secure in the points standings but don’t have wins are Matt Kenseth in fourth and Ryan Newman in eighth. They can actually play it a bit more conservatively and likely be OK, unless they come down to Richmond, the final regular season race, and there are 16 winners.

So, if you count Kenseth and Newman in plus the 11 winners, that leaves three open spots at the moment. Winless drivers playing the points game right now are Clint Bowyer at 548 points, Paul Menard at 541, Kyle Larson and Austin Dillon each at 524, Greg Biffle at 519, Kasey Kahne at 515, Brian Vickers at 507 and Tony Stewart at 502. As it stands now, that leaves eight drivers fighting for three spots.
Which teams that makes a key tire or fuel decision, or which driver missing that big accident, may well decide who makes the Chase or who doesn’t — and that may be the difference between having a winning fantasy team or a losing one.
LOOKING FOR SOME ACES
In the last two years, the one driver whose record sticks out at Indianapolis is Jimmie Johnson. Johnson has one win and has led a series high 172 laps in the last 400 laps run at the 2.5-mile oval which has four distinct turns. Johnson won this race in 2012 and was second last year, with four race wins total (2006, 2008-09, and 2012). So, it will be a bit of a surprise not to see him somewhere toward the front in this race.

Johnson teammate Jeff Gordon hasn’t had a tremendous amount of recent success at Indy lately, but he’s not been too bad either Gordon has finished 10th and seventh in the last two years. But for his career at Indy, Gordon also has four wins and has led a series high 488 laps in 20 races there. He’s also finished in the top 10 in 16 of those 20 races. Given that Gordon is having a better year, along with those numbers, he’s just hard to ignore this week.
It’s been a disappointing year for Kasey Kahne as he is the lone Hendrick Motorsports driver without a win. And while he has yet to win at Indianapolis, his history there does tell us there’s a chance his day could end in Victory Lane. Kahne has finished third and 12th in the last two races there and for his career he has three top five finishes, including a second. And Kahne, who also spent some years racing on the dirt tracks near Indy, would love to get his first win of 2014 at Indy.
It seems a little odd to talk about driver who has not led a lap in the last two races at Indy as a possible pick here, but Dale Earnhardt Jr. has been pretty close to leading and actually winning. Earnhardt has finished fourth and sixth in the last two years there. So he’s not been that far off.
MIDDLE OF THE ROADSTERS
Well, here we are again talking about Tony Stewart needing a win to guarantee himself a spot in the Chase. Stewart did get a win last week, only it was in his sprint car at Crystal Raceway in Michigan, not a Sprint Cup car. But just getting that winning feeling again could be a big boost to Stewart’s morale and you know Indy is a place where the Southern Indiana native wants to win as bad as anywhere — and there is a decent chance of that this week. Stewart has finished fourth and 10th the last two years there. For his career, Stewart has an active driver series-best average finish of 7.93. He has 11 top 10 finishes in 15 races, which includes two victories at Indy (2005 and 2007). Stewart is 22 points and five drivers behind the last Chase spot at the moment. Even if he doesn’t win, he’s a good bet to take a step forward in the standings Sunday.

Ryan Newman, Stewart’s former teammate, has quietly had a solid season his first outing with RCR, even though he is winless yet this year. Newman, a Hoosier native like Stewart, won at Indianapolis last year, so he has to be a threat again this week. Newman finished seventh in 2012 and has led 45 laps in the last two races at Indy. So, it’s hard to say he doesn’t have a legitimate shot Sunday. Another driver who seems to excel on the big tracks, even though this is not a restrictor plate track, is Jamie McMurray. He has won at Indianapolis before (2010) and has five top 10 finishes in 11 races there.

McMurray’s owner Chip Ganassi has also had success at Indy in the IndyCar series and sometimes teams seem to find a little extra something when a race is a little extra special to their owner.
Paul Menard is another driver who has gone largely under the radar this year. But since he’s 11th in points, he’s not been too bad too often and remember that his one career win did come at Indianapolis back in 2011. He has finished 12th and 14th the past two years at Indy.

DARK HORSES
This is one of those weeks where there are a lot of choices. So, if you are on pick limits, save regulars Kyle Larson and Austin Dillon for another race, unless you think one of them is going to win this week, which actually wouldn’t be a far-fetched idea. One of the key drivers this week is Juan Pablo Montoya, who has won at Indy in an IndyCar, but not in a Sprint Cup car, despite throwing away a guaranteed victory in 2010. He could be the first to win at Indy in both series having won the Indy 500 in 2000. He does have a second-place finish and another top 10 finish in his seven races here, along with a total of 203 laps led. Trevor Bayne is also available this week, but he hasn’t found success at Indy like he has on some of the restrictor plate tracks. In his three races at Indy, he has finished 30th, 28th, and 17th.

One interesting driver to look at this week is Matt Crafton. He’s found success in the truck series over the past few years and he will get a shot in a Sprint Cup car at Indy Sunday. And finally, well, yes, I have to mention her since it’s Indy, there is Danica Patrick. Now, she understands how to get around the place pretty well in an IndyCar, but questions remain about doing equally as well in a Sprint Cup car. In her only Sprint Cup start at the speedway, she finished 30th last year.
REARVIEW MIRROR
The top three spots remained unchanged in the Frontstretch League on Yahoo! as LeftTurnOnly with 5,233 points, NoBarNASCAR with 5,143 points and Mojothemonkey with 5,035 points lead the way. They are followed by NASCAR Forever at 4,922 points and Ace Racin’ at 4,906. The top mover after the race at New Hampshire two weeks ago was Joseph88 moving up 11 spots into 16th place.
The top scorer in the New Hampshire race was Checkers or Wreckers with 352 points. It had race winner Brad Keselowski, second-place Kyle Busch, fifth-place Ryan Newman and 20th-place Jeff Burton.

Please, no more all Chase all the time coverage.