On Monday this week, Brian France voiced his opinion on the newly formed Race Team Alliance, the consortium of the nine largest teams in the sport, who have banded together to help speak with one voice with – although sometime presumably against – NASCAR and their decision making processes.

Appearing on Sirius XM’s Sirius Speedway show Monday, France said, “Every decision we’ve ever made that’s important, the more input, the more people we heard from, the better the result. That will never change in the business model of NASCAR, because good ideas come from all over the place.”

Good ideas. Like the CoT wing? Not changing the schedule, ever? Doing away with all of the incentive challenges? Changing the points system every season?

If Wednesday night’s second annual Mudsummer Classic race at Tony Stewart’s Eldora Speedway illustrated, the majority of these good ideas in recent years have come from outside of walls of Daytona Beach. Even the Gen-6 car was spawned from manufacturers working closely with each other, in an effort to help them gain increased brand identity and awareness.

The main reason of course for the RTA to exist is to help keep the teams which are the foundation of the sport a viable business entity. In the light of this week’s recent report from Tripp Mickle of the Sports Daily Journal. Mickle wrote in his article that a recent race weekend at Kentucky Motor Speedway generated $1.5 million in cost to Stewart-Haas Racing, but less than a third of that was recouped by race winnings, France touched on the breakdown of the dollars involved with the new $8.2 billion 2014 television contract. 25% goes to the race team, with 65% going to the tracks (13 of which are owned by the France family) with 10% going to NASCAR. Naturally the owners would like to have bit more funds to help even out the exorbitant cost of travel to these events, however France said the current percentages were, “set for historical reasons – because it’s the right allocation.”

Sure the existing owners will be fine; they are long established, have all of the sponsorship dollars, and most are billionaires based on other businesses they have built in and outside of motorsports, but what about attracting new blood to the sport? Can anybody honestly say a new team can come in and be a contender to the level that the existing establishment? Sure there are the one-off wins like the Talladega plate track wins of Front Row Motorsports or Phoenix Racing – using cars and engines from established teams, but what chance does a legitimately new team have coming into the sport?

If Red Bull who has dominated Formula One for the better part of the past five years can’t hack it in NASCAR, who else stands a chance? And that is just on the Sprint Cup side of the garage – what about the Nationwide and the Camping World Truck Series? There’s a reason why Kyle Busch still has to drive his own truck at least ten times a year, as sponsorship money isn’t exactly sprouting forth from corporate America or from these television contracts.

And what of the Mudsummer Classic Part Duex? Even with the track soaked in rain the first part of the day, helping the event live up to its catchy name, it didn’t dampen the spirt or the enthusiasm of anybody involved. While Darrell Wallace, Jr. captured the third win of his career and second this season, there was legitimate racing throughout the field coupled with an atmosphere that helped generate enthusiasm for the sport and the series.

Part of the reason for this? A full-house. When the stands look full, even if there aren’t many of them, it makes the event look important and a rousing success. When there are acres of empty grandstands it just says, “if nobody else cares, why should I?”

Such is the attitude that should be given to smaller tracks in the lower series, specifically this weekend’s Nationwide Race at Indianapolis Motor Speedway. The night before the Brickyard 400 typically had Nationwide at Lucas Oil Raceway (i.e., IRP – Indianapolis Raceway Park), but now they too race the Brickyard, in front of a crowd that is smaller than that of the first tire test held here in 1992 for the Cup Cars. Is it really worth playing on such a grand stage of nobody is going to show up to see it? The crowds themselves for the Cup races have dwindled to what used to rival the 500 in its heyday, to that of just-another-race-on-the-docket caliber, despite a screaming good value on tickets now being promoted.

Fans have been screaming for NASCAR to get back to its roots for the better part of the past decade. Eldora’s dirt track simplicity is an example of that, which was once tossed around as a novelty or a joke is now real and the results have been undeniable. Smaller venues, stripped down formats, and a bigger piece of the pie for those who are doing the heavy lifting would help the spirit of the sport, the level of competition, and the atmosphere surrounding it. Wednesday night’s race was fun to watch and likely that much more entertaining to be there.

The “F” word has been missing from the sport for a while now, yet it comes out in the most interesting of places lately – not at the high-banked speedways, but at a mud bowl in the middle of nowhere and road courses in Canada and Wisconsin.

Hopefully NASCAR will take note. If not NASCAR, perhaps the RTA can help do something about it as well.

Vito is one of the longest-tenured writers at Frontstretch, joining the staff in 2007. With his column Voice of Vito (monthly, Fridays) he’s a contributor to several other outlets, including Athlon Sports and Popular Speed in addition to making radio appearances. He forever has a soft-spot in his heart for old Mopars and presumably oil-soaked cardboard in his garage.
Previous Truckin’ Thursdays: An Eldora Recap
Next Tech Talk with Tony Gibson for Indianapolis – Tire concerns, Two Grooves and Today’s Car Compared to 1992’s 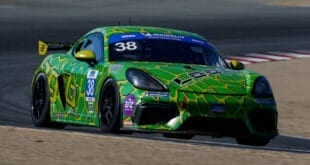 Zane Smith Narrowly Points His Way Into Championship 4 at Martinsville