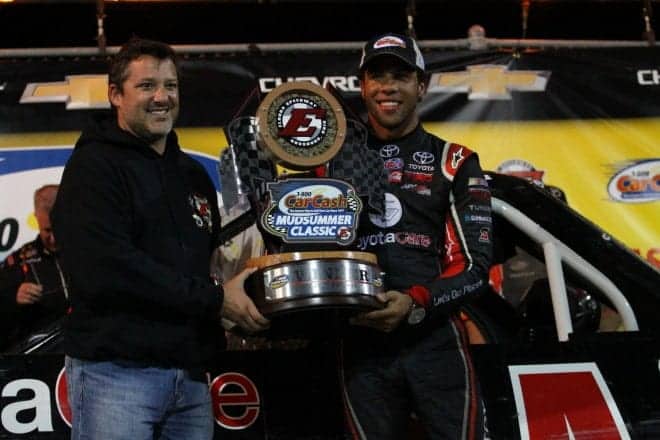 Prior to Wednesday night’s 1-800 CarCash Mudsummer Classic, track owner Tony Stewart was in the Media Center to unveil a new multipurpose building that will be constructed in Eldora Speedway’s infield beginning in October.  It will house a new Media Center, infield hospitality, Infield Care Center and concessions.

However, that was not the only topic of discussion during Stewart’s press conference.  While there, Stewart was asked about the feasibility of additional NASCAR series racing at Eldora.  Stewart was honest.

“I’d love for the Truck Series to not be the only NASCAR [Se that comes here,” Stewart said Wednesday afternoon.  “If this continues to go as well as we hope it does there’s no reason that the other two divisions couldn’t come possibly in the future.  I think we can make it work. If you can take the trucks and make them work here, the Cup cars and Nationwide cars aren’t much of a stretch from that. So it’s definitely feasible to do that.

Despite the desires that Stewart has, he has no plans to request Sprint Cup and/or Nationwide Series races for Eldora.  He’s content with just having the Camping World Truck Series for now.  He, and Eldora Speedway, consider it to be an honor to host the trucks.