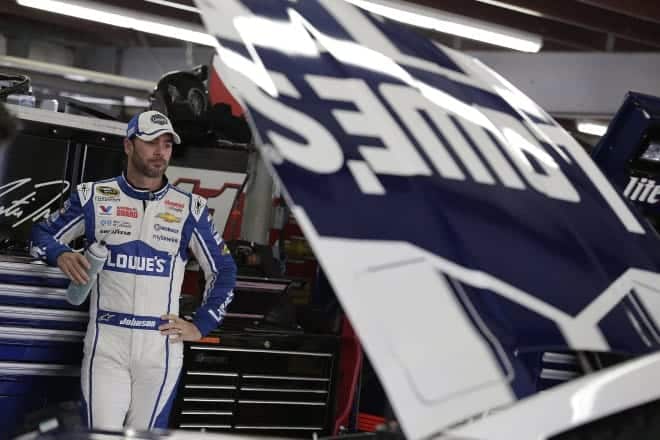 Indianapolis Motor Speedway. Simply reading those three words in succession should incite a fit of shivers up the spine of any race fan worth his/her salt. NASCAR’s Sprint Cup Series will invade the historic facility today for the 21st annual Brickyard 400. It seems wild to think that Indianapolis has been on the schedule for that many years now, but alas, it has, and today will mark yet another key chapter in the NASCAR-Indianapolis story. Much like in other marquee events, the on-track racing product tends to overshadow everything else when it comes to Indy, so that will be the biggest story heading into the race today. Along with that, the continued battle for Chase spots as well as the performance of a few intriguing part-time drivers will give this race plenty of storylines to satiate the average fan from the green flag to the checkered flag.

Like I said before, Indy is one of those places where what happens on the race track overshadows every other storyline. The Brickyard 400 is unquestionably the second biggest race of the year and attracts a great deal of media attention as well as attention from non-traditional places in general. As such, the excitement of the racing itself takes on an added air of importance when the series visits Indianapolis. That is something of a shame, because lately this track hasn’t exactly been a bastion of drama.

Ever since the introduction of the COT, the racing at Indianapolis has been maligned, to say the least, mostly due to the tire and aero combinations that NASCAR has settled upon for this race the past few years. With a few exceptions (2010 and 2011 were both solid races), this race has been a snoozefest, as the boxy COT (and now Gen 6) car’s power-to-weight ratio was too much for the amount of grip that was in the tires and the track.

NASCAR has settled on an entirely new tire combination for this year’s race that will hopefully help lead to a better show. The 2014 edition of the Gen 6 car still has a bit too much horsepower for this track, but with a grippier tire combination that is said to have more fall off, there is hope that this race will be different from previous iterations of the event. We’ll see if that actually comes to fruition a few hours from now.

2. Could a part-time driver win the second biggest race of the year?

Does anyone remember that Juan Pablo Montoya? You know, that guy that was in NASCAR for awhile but went back to open-wheel racing this year? He’s baaaackkk.

Indeed, Mr. Montoya has returned to Indianapolis in a one-off third Penske car in an attempt to capture the one NASCAR race he desired to win more than any other: the Brickyard 400. Montoya came oh-so-close to winning this race oh-so-many times, and his presence in the race always made the event a little bit more interesting.

Some are likely ready to write Montoya off this weekend due to the fact that he’s only competed in one Cup Series race all season long (Michigan) and is driving what is assumed to be an R&D-esque car. But look closer. Montoya has been blazing fast all weekend long, routinely posting lap times comparable to his Penske teammates who have been equally as fast (Montoya was sixth fastest in final practice Saturday). When you factor in the fact that Penske has been the class of the field for the better part of July, suddenly Montoya doesn’t seem like such a long shot.

Should Juan Pablo Montoya steal a victory today in his one-off ride, it would be a story for the ages. The implications of an IndyCar driver coming in to a NASCAR race and winning are massive. Such an event could pave the road for future IndyCar ringers to enter the Brickyard 400 with hopes of capturing the second most-desired trophy in NASCAR. This will undoubtedly be a fun story to watch.

Indianapolis Motor Speedway is a track where (barring fluky fuel-mileage situations) only the very best drivers in the sport excel. It is thus not surprising that the two most prolific NASCAR drivers of the past two decades, Jimmie Johnson and Jeff Gordon, have been the most successful drivers at IMS. The two have combined to win an incredible eight times at the Brickyard, with Gordon winning the inaugural race back in ’94.

Today, the two Hendrick Motorsports stalwarts will be gunning for a fifth victory at the famous rectangle. Should they manage to pull it off, it would be big, big news. No race car driver in any series has ever won on the oval configuration of Indianapolis Motor Speedway more than four times (Michael Schumacher has won on the road course five times, but that’s outside the scope of this discussion.) As such, a fifth Indianapolis win by Johnson or Gordon would put them in rarified air. It’s absurdly difficult to even get one win at the Brickyard, let alone five.

With this in mind, Johnson and Gordon will each bear special attention throughout the race today. A win by either would make for a historic moment that has huge history-book implications.

4. Could this be Kevin Harvick’s day?

Stepping away from the Hendrick discussion for a bit, it’s time to turn the spotlight on to the man who appears to be the true favorite to win today’s race: Kevin Harvick. We’ve all seen this old song and dance before: Harvick has been dominant all weekend, set a blistering track-record lap to grab the pole, and once again appears to be miles ahead of anyone else in the field. By all accounts, he is the clear favorite to win today. But does that mean you should automatically pencil him in to win? Not so fast.

The Brickyard 400 is notorious for breaking hearts, as many drivers with dominant race cars have had unusual circumstances and outright mistakes ruin their shot to kiss the bricks over the years (cough…Montoya…cough). With how mistake prone the No. 4 team has been this year, it almost seems like a foregone conclusion that they’ll go out and lead a ton of laps, only to follow up that dominance with a late race error that takes Harvick out of the running.

Harvick clearly has the speed to win this race today, but ultimately, his team will have to be flawless if he wants any shot at kissing the bricks for the second time in his career, because this track will make you pay dearly for any mistake that one makes.

Watching Montoya and other drivers in Indy cars and F1 it’s easy to see they are too racy for NASCAR. I wonder who will be the first driver to say that Montoya is actually racing him (or her)?