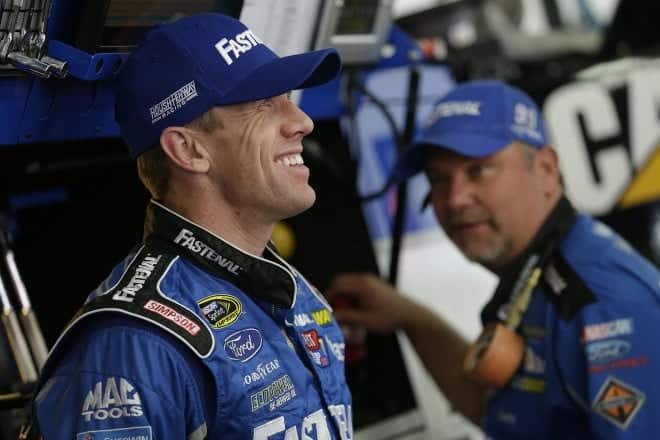 Second chances are rare with major life decisions. Sorry, Cinderella, but if you say “no” to the guy who brings that glass slipper, he won’t be around with a ring three months later. Life is far from fairy tale perfect, unlike a constant stream of Choose Your Own Adventures where few choices ever get a “redo” button.

Carl Edwards, one of the smartest men in the NASCAR garage surely understands that. It was just three years ago the athlete was faced with a difficult decision: sign a new three-year deal with Roush Fenway at age 32, or jump over to Joe Gibbs Racing and start over – leaving the only Cup team he’d ever driven for. JGR, aligned with Toyota, was in perfect position for long-term success after a year removed from a title push with Denny Hamlin and looking to perfect their three-car operation by replacing the struggling Joey Logano with Edwards. It’s the LeBron-style, Miami Heat-on-a-platter option most athletes get just once, with their careers shorter than most marriages, and retirement creeping up quicker than most people finish paying off their student loans.

Edwards, loyal to the manufacturer and the man Jack Roush who brought him here, chose to stay the course with his No. 99 Ford. Money, as it does in this business centric world did play a part; Blue Oval executives, well aware of Edwards’ crossover appeal, not just as a racer but also in the boardroom, felt like losing him could cost millions in sponsorship and branding. At the heart of it all, though was a simple thought process for an athlete who tries to keep his life, still based in the small-town Missouri world he grew up in, as simplistic as possible: the grass is not always greener on the other side.

At the time, Dale Earnhardt, Jr. was in a seemingly lifelong struggle to stay relevant at Hendrick Motorsports, a few years after ditching Dale Earnhardt, Inc. to “start over” with the best organization in sports. Kasey Kahne and Brad Keselowski were both struggling, changing course mid-stream despite long-term career paths mapped out for them. Starting from scratch, away from the only crew chief that delivered long-term success (Bob Osborne) and without the clear-cut label of #1 driver was not a rubber-stamp, guaranteed alternative. At the time, the No. 99 was in the hunt for a championship and cutting the cord then, with the team in such a rhythm could easily cost Edwards a one-time opportunity.

So, he stayed. Stuck through a 2011 campaign that, if not for a single pass missed by Tony Stewart at any of the final ten races that year would have ended in a title. Edwards seemed poised to be the face of Ford, with Roush in position to be its torchbearer for years to come. Matt Kenseth, Greg Biffle, and newcomer Trevor Bayne provided both diversity in opinions and veteran stability needed to for success.

And then, it all blew up. Aflac, which reportedly paid $26 million a year chose not to renew its deal for 2012. The face of a manufacturer, since then, has sometimes needed Ford to pony up individual race sponsorship money in order to keep the No. 99 from a full-scale blank hood. Roush wanted top dollar for its top man, prices that just wouldn’t work for any driver in this NASCAR economy (see: Dale Earnhardt, Jr.).

On-track, Edwards’ performance took a dip. He missed the Chase in 2012, perhaps the most difficult season of his career and crew chief Osborne was reassigned. Last year, he won twice but was dead last in the 13-driver Chase and really never consistent enough to be a true factor. It was a swing-and-miss twice, with the added expectation of being Ford’s front man on his shoulders; bad races simply led to more frustration. And then, the Blue Oval crowd went out and recruited the next Carl Edwards: Brad Keselowski, the 2012 champ, as the new knight atop a Penske Racing armor. Since their arrival, Roush Fenway has been the dutiful assistant, providing the horsepower needed for Ford’s new frontline operation to consider themselves a success story.

Which brings us to 2014, Edwards once again on the upswing but faced with the exact same decision. JGR, still there, believes in his talent and knows how to rebuild a career. After all, former teammate Kenseth got fed up with Roush in 2012, went there and is a year removed from an almost championship (the irony!). JGR is set up to contend, but seems to have slipped this season without enough resources and teams to bounce ideas off at Toyota. A fourth team, bringing them up to par with rival Hendrick Motorsports, would fix that. Edwards has been their focal point for several months. Sunday, we realized exactly how much, as the driver announced his departure from Roush Fenway with a “deal” he’ll be allowed to reveal sometime in the next few months. Let’s put it this way: a first-grader could put the pieces together and solve the mystery of where Edwards lands next.

And, like the driver said himself on Sunday, is that change really a bad thing? Imagine yourself in the driver’s shoes now. You’re 35, in a sport getting younger, one whose list of long-term car owners is increasingly uncertain. You stayed the course for three years – heck, almost a decade – to pursue your dream of a championship but couldn’t get it done. Loyalty is nice, but you’ve been loyal, for over a decade and look more like the next Mark Martin than Jimmie Johnson. How many more chances are you going to get? Can you get any chances with this team, now potentially second in command at Ford over the next three years?

All these questions are bouncing around in your head, and then Joe Gibbs Racing comes calling. It’s the same money, some of the same people, and the same belief system you had in 2011. Perhaps a small part of you has always wondered what it would be like to jump towards that grass. The rare, second chance has arrived, the glass slipper waiting at the doorstep.

Can you really fault Edwards for changing his mind this time?

Can anyone tell me whether gasoline or lighter fluid is more effective when burning a Tokoyo Carl Edwards shirt?

I always seem to, it is a mental block.

This just blew me away that Carl would leave Ford and Roush to go drive for the biggest phoney in NASCAR. Carl “was” one of my favorite drivers, but, I cheer for the manufacturer first. The driver is secondary. Toyota? No way! I will say that this will be interesting, given that Carl was one of the main reasons Matt bailed on Roush, plus, Carl will have to deal with two of the biggest crybabies (after Gordon and Johnson) in NASCAR. Wait until the first time Carl out-qualifies Cry-baby Busch, and Busch throws a temper-tantrum. No, carl might just find out that the grass isn’t always greener on the other side of the septic tank.

Good luck, Carl. It’s been fun cheering for you in your Ford, but I will not cheer you in a Toyota.

Football players, coaches and boxers claiming to be very religious never did sit quite right with me. I always imagined Gibbs telling his teams “Jesus wants you to maim that guy for no other reason than the entertainment of our loyal fans”. Ah, I think you may be reading that book wrong coach.

Was anyone really surprised by this announcement?
Will anyone be surprised when JGR announces a fourth team at the end of August?

He and Matt Kenseth were never very good friends or loyal teammates. (Remember Martinsville?). Gibbs is already a dysfunctional organization with two head cases in Kyle Bush and Denny Hamlin. The saving grace is the real ball coach has experience in balancing egos. That place, next year, will make Gene Haas’ operations look like Disneyworld. He will not be effective. He will not win. It is all about Carl. Greg Biffle will win more races

Kevin in SoCal
Reply to  Charlie

I agree with you. Edwards and Kenseth are NOT friends and I dont see them getting along any better at JGR than they did at RFR.

it seemed to be an obvious move the last time the option came around and he missed it. Kenseth has certainly made the most of the opportunity for change. Since I’m not a Ford nor an Edwards fan, it doesn’t really matter to me what team he is with next year.

I’m with you, Charlie. All the talk this year was about the mix of personalities and how the Hendrick South teams would have contracts out on one another’s family, blah blah blah. But this isn’t 2004 and Stewart, Harvick and Busch are not those guys either. Hamlin and Kyle Busch each see themselves as the face of Gibbs, Toyota, the Cup series, and motorsports in general. That’s not going to sit well with Carl Ego. He’d better win 8 races next year and at least almost challenge the home team, or else he’ll be asking for a release.

Giving it a second look, though, I’m not sure why this is news in today’s NASCAR. There’s not a single Hendrick team or Hendrick-supplied team involved in this transaction. Quick, somebody find out what Chad thinks about it, at least.

I don’t see how there will be enough room over at JGR for Carl’s ego. Feel sorry for Matt who managed to only briefly get away from that two-face. Just don’t see how the 3 current drivers are going to get along and be successful with the new guy. Think Gibbs made a mistake.

I try to support ford, but they have let so many good drivers get away from them over the years that it’s difficult. Ford doesn’t seem to fight as hard as chevy and Toyota. Of course it doesn’t help that nascar is bias towards chevy.

Face it, drivers are employees, albeit highly paid employees. In fact they are much like a quarterback on a football team. A really good one can make the difference in how the team does. But at some point the talent and the pay don’t match any more. At that point one or the other forces a change.And thats whats probably happening here. Nothing personal, just business.. .