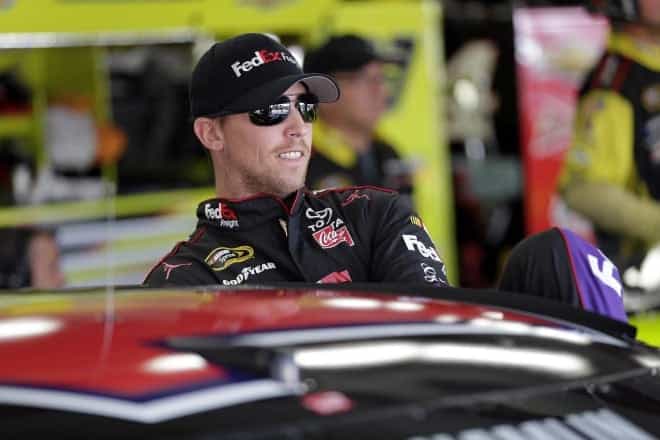 Could Denny Hamlin be on the move after the 2015 season?

NASCAR announced on Tuesday that the No. 11 NASCAR Sprint Cup Series team of Joe Gibbs Racing has been penalized for a rule infraction that was found during post-race inspection at Indianapolis Motor Speedway this past weekend. NASCAR has suspended crew chief Darian Grubb and car chief Wesley Sherrill for the next six races and placed both on probation for the next six months. Grubb has also been fined a total of $125,000. Hamlin will lose 75 championship drivers points, while car owner J.D. Gibbs will lose 75 championship owner points.

Per NASCAR’s full explanation of the rulebook in their press release, the infraction violated the following:

12-1 – Actions detrimental to stock car racing;
20-2.1 – Car body must be acceptable to NASCAR officials and meet the following requirements:
·         K – Any device or ductwork that permits air to pass from one area of the interior of the car to another, or to the outside of the car, will not be permitted. This includes, but is not limited to, the inside of the car to the trunk area, or the floors, firewalls, crush panels and wheel wells passing air into or out of the car;
·         L – All seams of the interior sheet metal and all interior sheet metal to exterior sheet metal contact point must be sealed and caulked. This includes, but is not limited to, floors, firewalls, wheel wells, package trays, crush panels and any removable covers;
20-3.4 – All references to the inspection surface in sub-section 20-3.4 have been determined with the front lower edge of both main frame rails set at six inches and the rear lower edge of both main frame rails set at eight inches. For driver protection, all firewalls, floors, tunnels, and access panels must be installed and completely secured in place when the car is in competition;
20-3.4.5 – A rear firewall, including any removable panels or access doors, constructed using magnetic sheet steel a minimum of 22 gage (0.031 inch thick), must be located between the trunk area and the driver’s compartment and must be welded in place. Block-off plates/covers used in rear firewalls in place of blowers, oil coolers, etc., must be constructed of 22 gage (0.031 inch thick) magnetic sheet steel. Block-off plates/covers must be installed with positive fasteners and sealed to prevent air leakage. Carbon fiber or aluminum block-off plates/covers will not be permitted.
It is considered a P5 Penalty and per Section 12-4.5 B of the rulebook, the possible penalties that can be instilled are as followed:
Loss of 50 championship driver and owner points, regardless of whether the violation occurred during a championship race or not;
·         $75,000 to $125,000 fine;
·         Suspension for the next six series championship races, plus any non-championship races or special events which might occur during that period, for the crew chief and any other team members as determined by NASCAR;
·         Probation through the end of the calendar year for all suspended members, or for a six-month period following the issuance of the penalty notice if that period spans across two consecutive seasons.
Also, because the problem was found post-race, section 12-4.5 C (1,2) also applies, which states:
If the infraction is detected during post-race inspection, then the following penalty elements will be added:
o    Loss of an additional 25 championship driver and owner points; regardless of whether it was a championship race or not;
o    Loss of an additional $50,000.
Hamlin finished third at Indianapolis Motor Speedway on Sunday behind Jeff Gordon and Kyle Busch.
Joe Gibbs Racing released the following statement on their intentions: “Joe Gibbs Racing (JGR) is aware of the penalty issued by NASCAR today regarding the No. 11 team’s post-race inspection infraction following Sunday’s Sprint Cup Series race in Indianapolis. JGR will plan to appeal the penalty, however, crew chief Darian Grubb and car chief Wesley Sherrill will begin to serve their suspensions starting this weekend in Pocono.”