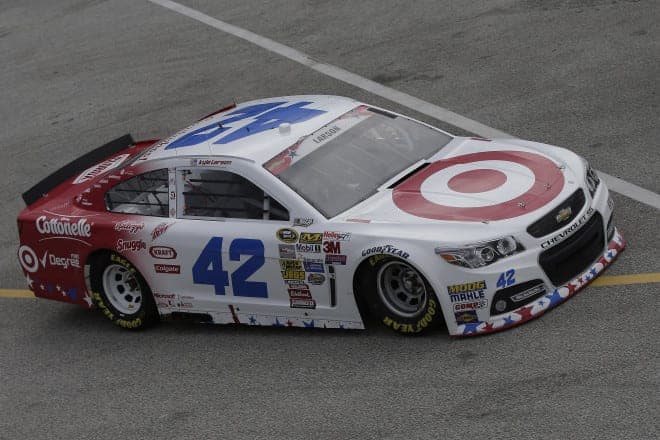 ONE: What Does a Fifth Brickyard Victory Mean for Jeff Gordon?

After winning four NASCAR Sprint Cup championships, 90 career victories (third all-time), 445 top-10 finishes, three Daytona 500 victories and now a fifth career win at Indianapolis Motor Speedway (the most all-time on the oval at IMS), what does the win on Sunday really mean for the 42-year-old driver?

Gordon has made it clear that time is certainly against him and that retirement is getting closer and closer, even eluding to the idea that ending his career with a fifth Cup championship in 2014 would be a good way to go out during this year’s Sprint Cup Media Day at Charlotte Motor Speedwat. The veteran knows that another title is within reach, yet somewhat far away this season. Gordon, who is now first in the points standings and has two wins in the No. 24 Chevy for Hendrick Motorsports, also needs to carry this momentum into the Chase, something he and the No. 24 team have struggled with in previous years once reaching the playoffs.

Jeff Gordon has nothing to prove any longer. He’s accomplished more in his 23-year career than most drivers even dream of in their entire lives. But now that the No. 24 is firing on all gears and things are really headed in the right direction for he and crew chief Alan Gustafson,  could this win at the Brickyard be just what they needed to push Gordon toward that coveted fifth Sprint Cup championship title this fall?

TWO: Will Chevrolet “Set ‘Em Up and Knock ‘Em Down” for the GoBowling.com 400 at Pocono?

In the last 10 visits to the 2.5-mile, triangular track in the woods of Long Pond, Pa., Chevrolet has won five times, including the last four in a row. Toyota has won three (two by Denny Hamlin), Ford with one victory (Greg Biffle in 2010) and even Dodge in 2011 with Brad Keselowski. But no manufacturer has had the level of sheer dominance at Pocono Raceway that Chevrolet has experienced.

Twenty-three Chevrolet SS race cars are entered into the field for this weekend’s GoBowling.com 400. Will Chevy show its power again? Will Dale Earnhardt, Jr. make it three victories on crew chief Steve Letarte’s farewell tour? Will Jimmie Johnson come back from some poor finishes as of late and get his fourth victory of 2014? Or will another in the Chevy camp take the win at Pocono? Names like Stewart, Newman, Larson and Kahne come to mind.

THREE: Is this finally the week for Kyle Larson?

Kyle Larson has finished his last two races in the top 10, with a third-place finish at New Hampshire Motor Speedway two weeks back, then a seventh-place finish last Sunday at Indianapolis Motor Speedway, the highest finish of any rookie in the field. The 21-year-old from Elk Grove, Calif., has done all that has been asked of him as a rookie in the No. 42 car — and more.

Currently Larson is projected as in the Chase for the Sprint Cup, in 15th place, just one spot ahead of fellow rookie, Austin Dillon. He also has lead laps at multiple races this season, and has been in contention to get his first Sprint Cup win numerous times, including at Fontana early in the season where he finished second to Kyle Busch. Coming into this weekend’s race at Pocono, Larson likely has high hopes that the Target Chevy will again be in the top 5 and be at the right place at the right time when the checkered flag drops. He and the No. 42 team finished fifth last race at Long Pond, where he led seven laps in a race which Earnhardt secured his second victory of the season and a locked-in spot in the Chase.

Larson has two wins this season in the Nationwide Series; could this be the week (on a long-run, mostly flat track, where he’s been good in the past) that Kyle Larson gets that first career win at the highest level of motorsports?

Can anything stop the run for Toyota or Kyle Busch Motorsports this season in the Camping World Truck Series?

Even when you take Busch out of his own truck and put a second-year rookie in Erik Jones in, the KBM folks still find a way to win. And the same was true last Wednesday night in NASCAR’s long-anticipated annual date with dirt: the 1-800-Car-Cash Mudsummer Classic at Eldora Speedway in Rossburg, Ohio. The race that saw lead changes and the beating and banging that the Truck Series has been come to known for was won by a KBM truck, the No. 54 Toyota of Darrell Wallace, Jr.

Wallace’s second victory in 10 races this season, his first coming at Gateway in June, was not only special because it was on dirt, but also because it kept the Toyota streak alive.

Through the 10 races of the Camping World Truck Series this season, Busch has won half of the races, Jones has added one in the same No. 51 truck, while Wallace has won two, asserting Busch’s dominance. Meanwhile, the other two races have been won by defending series champion Matt Crafton in the No. 88 Toyota Tundra for Thorsport Racing. Toyota has dominated every race this season, leading in the manufacturers points at 478 points. Their nearest competitor, Ford, is 71 points behind with 407.

Who will be the first to unseat Toyota — or for that matter KBM’s — reign in the trucks? Perhaps it could be the new points leader, Ryan Blaney? Blaney has to feel confident going into the Truck Series’ only trip to Pocono; he won there last season. Look for Ford and Blaney to stir things up and challenge the Toyotas in the Pocono Mountains 150 this Saturday.

FIVE: Looking Ahead to Watkins Glen: a Ticket to the Chase?

Taking a quick look ahead at the Sprint Cup schedule next week, a few drivers have to be happy to see the 3.4-mile road course on the horizon. There certainly are a few drivers who may be looking to Upstate New York for their ticket to the Chase. Among those are driver of the No. 9 Stanley/DeWalt Ford Fusion for Richard Petty Motorsports, Marcos Ambrose.

The 37 year-old Australian has always fared well when it’s come to running on road courses — Ambrose’s only two Cup victories are at Watkins Glen, coming in 2011 and 2012, making Ambrose another sure bet for a win at the Glen in 2014.

Who else might use Watkins Glen as their springboard to possibly making the Chase? How about A.J. Allmendinger?

Allmendinger is still winless is his 211 races, spanning eight years, but does have two Nationwide Series victories (both coming in 2013) on road courses at Road America and Mid-Ohio. The No. 47 has finished in the top five only once this season, at Talladega, where he started third. Allmendinger also has three top-10 runs at California and Richmond. Additionally, Allmendinger led 35 laps at Sonoma this year before getting into a wreck with Dale Earnhardt, Jr. and finishing 37th.

So for at least two drivers in the garage area this weekend at Pocono, their hopes for making the 2014 Chase for the Sprint Cup will realistically lie three hours north in Watkins Glen, N.Y.

I think a good bit of the Danica hate stems from over exposure. You’ll notice it has died down now that Fox is on hiatus. I’m starting to feel the same way about Larson. He bought a mansion, he knocked up his girlfriend, and he didn’t win last week or the week before but this week he will. He seems like a pretty good young driver, but please could we maybe wait until he actually wins a race or two before placing him in the hall of fame. Why is it that the entire Nascar press locks on to a few manufactured narratives and beats them to death. Have an original thought once in awhile. Just in case you haven’t noticed the CWTS stands are empty and the TV ratings are just behind Threes Company reruns. I posit that what remaining fans NASCAR has are not interested in Japanese truck racing dominated by one Cup driver in superior equipment. Imagine that!

I don’t necessarily agree that there has been overexposure for Kyle Larson. We knew coming into the season that this was a banner year for the rookie class, and the fact that Larson has been so competitive in so many races is a pretty big story. After it was announced that Larson would be taking over for Montoya in the #42 ride, there was a lot of discussion about whether the move to cup was too soon. I think Larson has answered the challenge, and that’s a darned good story to report. I don’t really care about his personal life, but his professional accomplishments, even without a win at this point, is one of the best stories of the season.

For the ignorant, Larson came from middle class working parents and basically from the time he quit go cart racing, made it on his own. No silver spoons from a rich car owner grandfather, on his own and his racing ability. For the ignorant, check his stats racing sprint cars and usac midgets. If he would have stayed in those cars, he would be a champion but the lure of big money drew him to nascar. How he spends the money is no ones business as long as he does’nt cause harm to someone.

I’m half winding you up here so I beg forgiveness in advance. Many very talented drivers are terrific in other series and never do much in NASCAR. I don’t pretend to know why. What I do know is that until Larson actually wins something he could be one of them. RaceHub did an entire segment on Larson’s new mansion. I read on Frontstretch that he knocked his girlfriend up. Not racing news so I didn’t care squared, but give me this, it does look a wee bit like overexposure. My question is this, if Dillon, or gasp Danica wins before he does what happens to all this next big thing narrative. My whole ignorant point is that perhaps the victory celebration can wait until there is an actual victory.