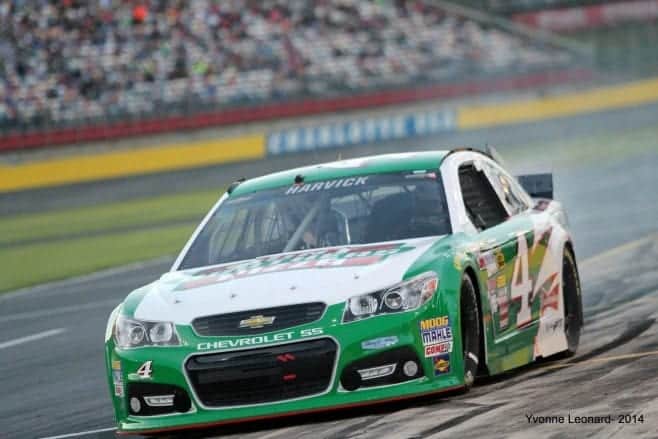 ExxonMobil announced on Monday they’re expanding their partnership with Stewart-Haas Racing, adding another primary sponsorship race to their schedule. However, it’s not with Tony Stewart, who they back consistently as part of a multi-year deal with the No. 14 Chevrolet. Instead, they will be the primary sponsor for Kevin Harvick’s No. 4 for the GoBowling.com 400 at Pocono Raceway on August 3rd.

“Kevin Harvick has had a brilliant year and is a strong contender to win the 2014 Sprint Cup Series title,” Artis Brown, Global Motorsports Manager for Mobil 1 said. “As a member of Stewart-Haas Racing, Kevin has experienced the protection and performance benefits of Mobil 1 lubricants in the No. 4 race car firsthand. Now, with the No. 4 Chevy, we’re proud to have Mobil 1 on and under the hood.”

“I’m honored to be driving the No. 4 Mobil 1 Chevrolet SS at Pocono,” Harvick said. “Mobil 1 is a truly iconic brand in motorsports, both as a major sponsor of racing and as a performance partner for top race teams around the world. I know that Mobil 1 will help me get to the winner’s circle as I drive toward the 2014 Sprint Cup championship.”

“Kevin is having a great season and is poised to make a great stretch run,” SHR co-owner Tony Stewart added. “Beginning with that 2011 season, Mobil 1 has been a great partner for the entire Stewart-Haas Racing team — this year, even more so with our expansion to four cars.”

To help build publicity for the announcement, Mobil 1 released a special video on their Facebook and YouTube pages.

Stewart-Haas Racing also revealed, on the heels of the announcement that for the remaining 15 races this year, Budweiser and Jimmy John’s will split primary sponsorship for Harvick, while Bass Pro Shops and Mobil 1 will remain the co-primary backers for Stewart’s No. 14 Chevrolet.