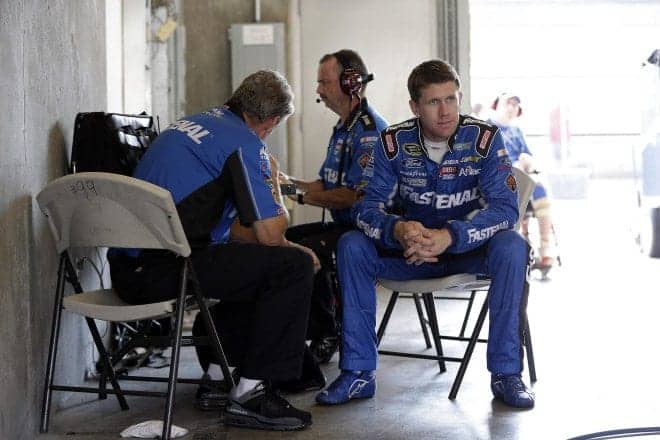 Did You Notice? … How the biggest move of Silly Season didn’t cause that much of a stir? Carl Edwards’ decision to leave Roush Fenway Racing, a move which would have caused a collective gasp a few years ago instead had most observers yawning, pulling the old McKayla-is-not-impressed-face from the 2012 Olympics, while chanting the phrase, “Tell me something I didn’t know.”

That’s because Silly Season in NASCAR, once the place for National Enquirer-style drama has devolved into an anticlimactic affair, one where the full season plot line gets revealed with six episodes left in the show. In a 24/7 news environment, where information gets reported on sometimes before it actually happens, Edwards’ departure from RFR came with little fanfare. Even more casual fans knew of the fourth team getting developed at Joe Gibbs Racing. It’s hard to walk the garage these days without getting stopped by accident and asked if you’re under contract for 2015, what your status is and would you like to be part of the newest expansion by Toyota? After three years of under-performance with a team in RFR that has been slowly withering, it’s clear Edwards would at least take a long look elsewhere in free agency – or so he thought.

This driver’s ability to “scour the market,” or lack thereof is where NASCAR is hurting itself the most these days, a laughingstock of free agency news compared to the NFL, MLB, and the NBA. With the number of car owners down to a handful, the sport’s four-car limit and no new investors on the horizon, the Silly Season options for top drivers can be counted on one hand. For Edwards, it was clear early on there were only a couple of places he could wind up, considering he was already with a major, Chase-contending organization that is one of just four to win a championship within the last decade. Two of them, Hendrick Motorsports and Stewart-Haas Racing find themselves filled to the brim, all drivers signed to long-term contracts and no room to expand under the current NASCAR cap rules.

Other options, like Richard Childress Racing and Chip Ganassi were a lateral move, if not a step down from RFR even in a down cycle for Ford’s once-dominant force. Penske Racing, while a viable option within the Blue Oval family would have caused a lot of bad blood within a manufacturer trying hard for all its entities to work together. So who does that leave? Michael Waltrip Racing, another lateral move with Toyota or Joe Gibbs Racing.

You connect the dots… then, have your four-year-old son, nephew, and the dog do it. It’s really not that hard.

Therein lies NASCAR’s problem, a sport once sold with TNT’s “We Know Drama” tagline, is completely devoid of it when it comes to where drivers will end up next. What’s worse, even as reports run rampant as to Carl’s future destination, no one’s going to be able to talk about it for weeks based on contractual obligations. We don’t get the same type of “waiting period” when it comes to, say NBA free agency. And when we do, like in the case of LeBron James recently, one of the sport’s biggest stars finds himself with a buffet list of choices. The drama can ramp up for a whole week, causing record ratings and attention while several different scenarios get fans drooling.

Instead, the current process in NASCAR feels (ironically) too slow. Too easy to figure out. And everyone winds up cheapened by it all, like going to see a movie with four-star reviews only to fall asleep in the theater. In a racing world where all accomplishments feel watered down these days, one of the sport’s biggest drivers shifting teams should move the needle more than it did. The drama that spurred the sport’s growth, off the track as well as on it, needs to return.

NASCAR must find a way.

Did You Notice?… Quick hits before taking off…

– NASCAR’s new format, for the most part, has pushed drivers to get more aggressive — but there’s still the problem of having an entire organization running nose-to-tail with each other. With Kyle Busch second, Denny Hamlin third and Matt Kenseth fourth in the closing laps, what incentive was there for any Joe Gibbs Racing driver to pass each other? Busch and Hamlin are in the Chase, they weren’t catching Gordon, and Kenseth needs to stay consistent in order to secure his place on points. Of course they were going to run easily spaced and coast to the finish line, instead of racing for position and taking each other out. We’re seeing less of this type of performance these days but with the Chase eliminations looming and a glutton of three-to-four car operations getting everyone within their team to run the same speed, you wonder about a more disastrous scenario reoccurring in more races down the stretch.

– Speaking of car ownership, the 43-car breakdown for Pocono gives us the fewest number of owners entered in NASCAR’s modern era. Check out the breakdown:

That’s only 21 different organizations, for 43 spots with several of them heavily connected. The Race Team Alliance, currently nine members strong wants to invite the rest of the full-time teams to join up, but there’s no need to get a bigger conference room. There’s honestly not too many left.

– Heading to Pocono this weekend, Tony Stewart is the driver to watch. Just 17th at Indianapolis, one of his best tracks, the No. 14 car is precariously close to tipping out of the Chase. But Pocono was a place in June where Smoke could have smoked the field, including a dominant Brad Keselowski and Dale Earnhardt, Jr.,  without a poorly-timed speeding penalty on pit road. The other tracks remaining based on 2014 performance, simply don’t tilt Stewart’s way in terms of Victory Lane potential, so this weekend could be his best chance to kill the drama and snag a spot. He’s been tearing it up in Sprint Cars lately — perhaps that confidence will carry over into the Sprint Cup cars.

–  If you haven’t seen it, our “Numbers Game” column in the free Newsletter goes over the stats to remember from the previous race. Here’s some of the best ones for those who haven’t signed up to get it yet:

Straight victories for Chevrolet at Indianapolis. Overall, they’ve won 16 of 21 Brickyard 400s, with Bill Elliott the last to break their streak, driving a Dodge to the win back in 2002.

Lead changes at Indy, the third time in five races a Sprint Cup event has had 15 or fewer passes for the top spot.

Since there are so many people covering the sport now days, Silly Season never ends and instead of a big bang effect with news that has everyone oohing and aahing, the news kinds of leaks out slowly in stages which lessens the “HEADLINE!!!!” potential.
Before the internet and NASCAR’s boom of coverage in the mid-90s, these rumors wouldn’t have been published anywhere until the official press release which would then result in a big bang headline.

Well, as you said, Tom, there are not a lot of options for upward mobility for the drivers these days and as Bill says, with the internet, we hear the rumors and speculation for months. Jack Roush sure wanted to make sure he got to announce the news rather than Carl, what a sourpuss that man is. I think I can count on one hand how often I’ve seen him smile – even when he’s supposed to be happy.

Can’t really blame Carl for making a move. It helped Mark Martin and he was “retired” and Kenseth had a great season last year – even if I’m not a fan of Toyota or JGR.

Not sure exactly what NASCAR can do. The brilliant ideas they often come up with usually wind up biting them in the butt as opposed to improving things. The management,whether it is related to competition or PR, is a fine example of invoking the law of unintended consequences. But BZF can sure get the TV people to ante up $$, except for ESPN, who didn’t even bid for it. That says lots about the state of the sport – NBC wanted back in, at any price, ESPN doesn’t care because right now, NASCAR is NOT a hot property.

Two important words are missing: “irrelevant” and “apathy”. Both relate to the current state of Nascar.

Oh, and I hope Carl realizes that he’s going to a team with a nascar bullseye on it’s back.

If you take out all the Nascar owned, or affiliated (like MRN) or media blogs (ESPN, Fox Sports, etc) there arent really that many people writing in the blogosphere about Nascar these days. Plus how many of the “news” items are just announcements that the XYZ racing teanm has a two race sponsor. Just part of the decline if you ask me.

So basically Tom you are whining about the lack of drama for NASCAR silly season when you as part of the media/reporting machine are actually part of the problem. Maybe the “writers” should hold back on publishing rumors, speculation, and gossip and report on actual news, delve deeper into actual factual stories and not hound those involved to death that they cave in and reveal the secret.